At a keynote held at the ongoing IFA electronics trade show in Berlin, Huawei announced the AI Cube, its answer to the Amazon Echo, Apple HomePod and Google Home. Huawei says the AI Cube is the world's first Alexa enabled smart speaker with an in-built 4G router. The smart speaker supports LTE Cat.6 for cellular speeds of up to 300Mbps, and dual-band Wi-Fi 802.11ac. We managed to grab some hands-on time with the AI Cube, and here are our first impressions.

The AI Cube's cylindrical design is sleek and minimalist, and the speaker looks a lot like Bose's SoundLink Revolve and Revolve+ Bluetooth speakers. The top half is made of plastic, below which is a mesh panel covered in fabric. On the bottom, you'll find a Micro-SIM card slot, an Ethernet port, and the power socket. The AI Cube is meant to be stationery and uses a proprietary mains power adapter. 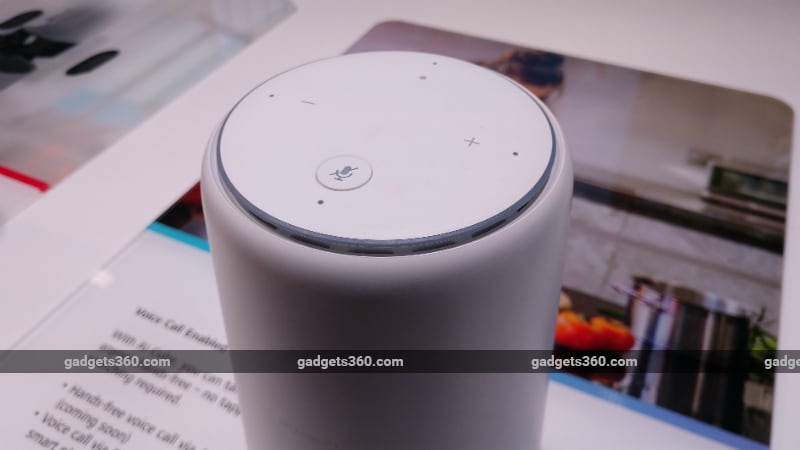 It will be available in three colour options - Red, Grey, and Green, all of which have white plastic on top and coloured fabric mesh panels. There is an LED ring as well as three capacitive buttons on top to increase/ decrease volume and trigger Alexa manually. There is also a physical button that disables the microphones in case you're worried about privacy. The LED ring glows blue when Alexa is invoked and red when there is an error. At the back, there are LED status lights for Wi-Fi, LAN, and the 4G signal, as well as a power button and a HiLink button for pairing with other Huawei smart home products.

The AI Cube has four far-field microphones as well as an aluminium diaphragm and passive radiators. It delivers 360-degree sound and uses Huawei's proprietary Histen audio enhancement technology  which adds virtual bass, a linear phase equaliser, and adaptive gain control. In our brief hands-on with the device, we found the bass to be crisp and punchy, and the maximum volume was impressive for a speaker of this size. However, the mids seemed to be pushed down in the sound mix. The smart speaker did a good job of recognising our voice, despite the noise and commotion at the IFA showfloor. 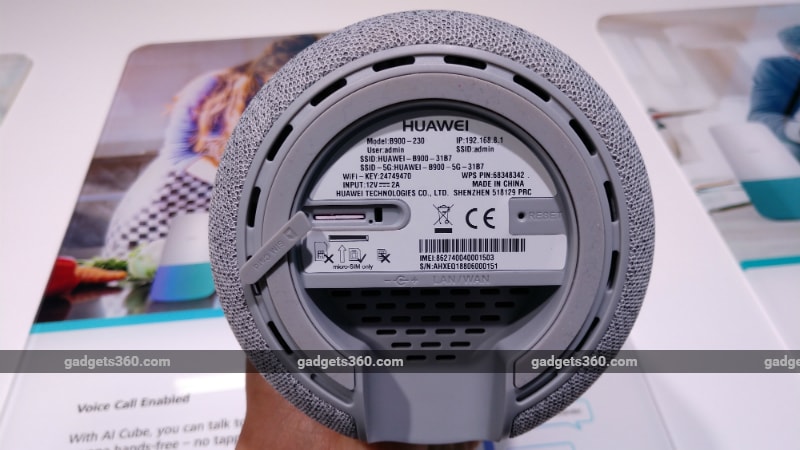 The biggest USP of this smart speaker is the fact that it doubles up as a 4G Router, allowing users to use Alexa features without being tethered to a Wi-Fi connection. It supports LTE Cat.6 as well as dual-band Wi-Fi 802.11ac, with speeds of up to 300Mbps and 1,200Mbps respectively. The Ethernet port at the bottom allows the AI Cube to be used as a standard Wi-Fi router as well. A detailed assessment of these features will have to wait till we can test the device extensively.

You have to use two smartphone applications - the Alexa app as well as Huawei's own - to manage the device. The 4G and Wi-Fi settings are configured via Huawei's SmartHome app. Alexa calling is not supported by the AI Cube at the moment, but Huawei promises that this feature will be added with a software update. The AI Cube can use your smartphone to make calls, when it is connected via Bluetooth.

The AI Cube will be launched in European markets around the holiday season, close to Christmas. Huawei hasn't announced pricing or global availability details yet. The AI Cube is a unique product that might be able to challenge the likes of the Google Home and Amazon Echo, if priced competitively. If it launches in India, we will get our hands on a unit for a full review, in which we will be able to carry out detailed tests and evaluate it against its competition.

Disclosure: Huawei sponsored the correspondent's flights and hotel for the trip to IFA, Berlin.

product The AI Cube is the world's first Alexa-enabled smart speaker with an in-built 4G router. Here are our first impressions from IFA 2018.