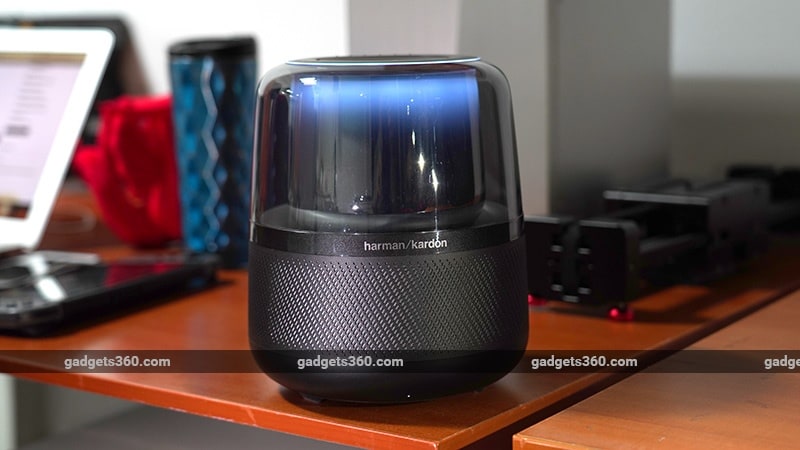 The smart speaker segment has only recently begun gaining traction in India, ever since Amazon officially launched its Echo line of speakers last October, followed by Google with its Home series of smart speakers earlier this month. Both companies have their own AI assistants, which let you do things like set reminders, stream music from the Internet, and even control the lights in your house.

Google and Amazon develop and sell their own speakers to bring their assistants into your home, but have also licensed their respective AI assistants to other speaker manufacturers. Harman Kardon launched its Alexa-powered Allure speaker in India back in December, and we finally have one in our lab for review. Priced at Rs. 22,490, it's quite a bit more expensive than Amazon's top-end Echo Plus model, so let's see if the premium is worth it or not.

The Allure has a pretty funky, eye-catching design which is sure to turn heads. In fact, it reminds us a lot of the woofer of Harman Kardon's SoundSticks speaker set, which has been fairly popular over the years. The Allure is heavy at 2.5kg, but that's not really an issue since it isn't supposed to be portable.

The bottom half of the speaker is a metal grille for sound to come through. The upper half is a transparent plastic case so you can see the pulsating LEDs, which glow when music is playing. However, the lights don't sync to the beat of your music. You have the option to turn this off through the HK Alexa Setup app.

The top of the speaker has touch sensitive zones and an LED-lit ring, which activates when you use the hot phrase ‘Alexa'. You can manually summon Alexa by touching the ‘circle' in the centre too. There's a touch-sensitive volume control strip here, and a button to mute the microphones. You get a power indicator facing forwards at the bottom, and the power inlet is at the back. The Allure can also be used as a Bluetooth speaker, for which there's a dedicated touch-sensitive backlit pairing button.

The Allure is extremely well built and looks really classy. The prominent rubber feet help it stay planted on a desk or the floor. In the box, you get the quick-start guide, warranty pamphlet, and a relatively fat power brick.

Audio is handled by three full-range, 1.5-inch drivers firing outwards, along with a 3.5-inch subwoofer that fires downwards. Unlike the speaker arrangement on the Amazon Echo Plus, the subwoofer in the Allure fires directly at the surface below, which pushes it outwards, and is why the bass sounds so much better. At the same time, you also need to be careful where the speaker is placed as at high volumes, the bass from the subwoofer can cause unwanted vibrations. Your best bet is to place it on the floor, or a sturdy table.

The Allure has a rated frequency response of 40Hz to 20,000Hz and uses Bluetooth 4.2. It also has dual-band Wi-Fi 802.11ac for connecting to the Internet. The speaker doesn't seem to support any high-resolution audio codecs for Bluetooth streaming, and when we connected it a Google Pixel 2 XL (Review), it defaulted to the SBC codec. We tested the Allure running firmware v5009.145, but it did get an update to v5507.150 during our review period.

Setting up the Allure isn't very straightforward. You'll need the HK Alexa Setup app to connect the speaker to your home Wi-Fi network, after which you'll be able to use it through the Amazon Alexa app for Android or iOS. The HK app didn't play nice with our Xiaomi Mi Router 3C (Review) but worked fine everywhere else. The app is needed to establish the initial connection, update firmware, set the language for Alexa, and sign in to your Amazon account. Actions such as enabling skills and setting up home automation can be done through the Amazon Alexa app.

One issue we faced instantly was the unresponsiveness of the touch buttons. It took a couple of presses before the ‘Alexa' button activated. It was the same with the Bluetooth button and we had to struggle a bit to get the speaker into pairing mode, which requires a long-press. The button to mute the microphone worked better. It's also hard to get the exact volume level you're looking for on the first try, since the touch panel isn't as accurate as a physical dial would be.

We found that Alexa worked decently when we asked it to perform simple tasks such as creating reminders or a to-do list, and playing music. It's still a bit behind Google Assistant in certain cases like handling contextual searches well. Things like the ability to play a game, for example, require you to enable that particular skill from within the app.

By default, there's Saavn and Amazon Music for playing music, NDTV for news briefings, and Amazon's own app for the weather, but you can add a lot more. Some skills such as Uber require additional login details so that Alexa knows your ‘Home' and ‘Work' addresses. There are plenty of other localised apps including Ola, Syska Smart Home, Zomato, etc.

You can't make voice calls or send messages using voice commands through the speaker yet, but you can through the Alexa app. The contact you're calling also needs to have an Alexa-enabled device for a call to go through. When streaming music over a Bluetooth connection, the Allure doesn't let you use Alexa to change the track, which is something you can do with an Echo speaker. We did tinker a bit with home automation using a Syska SmartLight, which worked well and is something we could totally get used to.

We were able to use the Allure to play music on another device such as the Echo Plus on the same network. However, when we tried to do the same through the Echo Plus, it wasn't able to detect the Allure. According to Harman's FAQ webpage, The Allure isn't equipped for multi-room audio yet, which could be why Echo devices can't detect it.

The Allure has four microphones for far-field voice recognition, but sadly, we didn't find them to be sensitive enough when it comes to waking up Alexa. In a quiet room, it worked alright, but in most cases where there is ambient sound around the house, we usually had to say the phrase multiple times before it was detected.  If you have music playing at a high volume, it's nearly impossible for the speaker to hear you. In comparison, we found the Echo Plus with its seven-mic array far better at receiving commands. The firmware update we received during our review period (v5507.150) seemed to improve the performance in this department a bit.

On the other hand, one thing the Allure did well is produce room-filling sound. Audio has a warm tone to it and there's ample bass that can be felt even at lower volumes. The sonic signature isn't very balanced though, and the bass tends to overpower vocals and mids at higher volume levels. The Allure manages to stay distortion-free even at full volume, but the bass feels too boomy. The mid-range has detail but instrument separation can be hard to make out at times. The highs are handled well without sounding shrill. Also, since the drivers fire in all directions, there's no specific sweet spot for you're listening to music.

Verdict
Harman Kardon has certainly chosen an apt name for its speaker. The overall design with the transparent top and soft pulsating lights makes it very alluring indeed. Build quality is superb, and it would look just as good on a desk as in your bedroom. We like the amount of bass it can put out, which is a lot better that what the Echo Plus delivers. The warm sonic signature is also a plus.

However, Alexa integration is one of the main selling points of the Allure, and simply put, it doesn't work quite as well as Amazon's own Echo devices. The sensitivity of the touch buttons is a problem, and getting the speaker to recognise its own hot-phrase from a distance is difficult. Plus, the Allure doesn't quite have all the functionality of the Echo just yet.

Then, there's the price. At Rs. 22,499 in India, it's about Rs. 7,500 more expensive than the Echo Plus. If you absolutely need the higher volume levels and thumping bass, then the Allure beats the Echo Plus hands down. However, for everything else, you're better off with Amazon's device, and the money you save can be used to add more IoT devices to your home.