Are the Godrej EVE security cameras better than the affordable alternatives from Xiaomi and its Yi brand?

The Godrej name is held in high esteem when it comes to electronic appliances for home and office use. The company has also expanded in the domain of connected smart home appliances and now offers a rich portfolio of products, which include the Eve series of security cameras. We have a trio of security cameras from Godrej up for review – the Godrej Eve PT, Godrej Eve Mini, and Godrej Eve Cube — which differ in their design, feature sets, and price. The prices of the three models range from Rs. 3,000 to Rs. 9,999. Are these security cameras worth their asking prices, and do they offer more value than competitors from the likes of Xiaomi? Let's find out in our review.

The Godrej Eve PT, Godrej Eve Mini, and Godrej Eve Cube security cameras differ in terms of their design and build quality. We'll start with the most expensive device in the trio, the Godrej Eve PT which currently goes for Rs. 9,999. It's a spherical unit that can rotate freely on its base mount. The exterior is glossy white with a thick black vertical strip which contains the 2-megapixel camera sensor and a hard flap covering the reset button and the microSD card slot.

The base has a speaker, with the Micro-USB and Ethernet ports beside it in a small recess. The Godrej Eve PT bears a strong resemblance to the Mi Home Security Camera 360°, save for its glossy white finish and smaller black strip in the middle. The camera has a horizontal swivel range of 355 degrees, while the vertical angle can be between 10 degrees and 90 degrees.

Just like the Xiaomi offering, the motorised camera does not make any sound while rotating on its base when you control it using the Godrej Eve app on your smartphone or tablet. 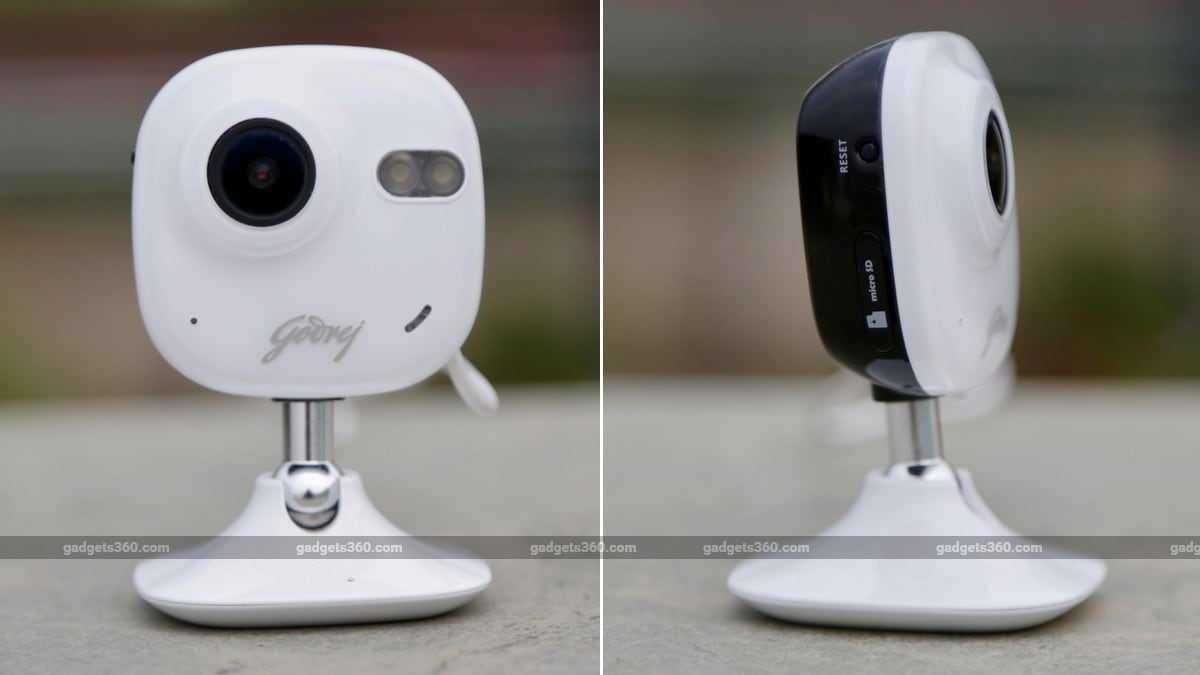 The Godrej Eve Mini and Godrej Eve Cube both sport more conventional pedestal designs and have glossy white surfaces. The Godrej Eve Cube's camera body is oval in shape (despite its name) with a centrally positioned camera lens. An infrared illuminator and LED light are positioned above and below the lens respectively.

The speaker is located at the back, just behind the 2-megapixel camera lens, and there's a reset button below it. The right side features the Micro-USB port, and a microSD card slot can be found on the left. This camera can recognise microSD cards of up to 128GB in capacity.

As for the Godrej Eve Mini security camera, it features a squarish camera body with rounded corners. The top-left corner is where the 1.3-megapixel sensor (115 degrees field of view) is located, with two IR illuminators for low-light vision to its right. The LED light and the microphone are located at the lower right and left corners respectively. Unlike the other two models, the Godrej Eve Mini security camera does not feature a Micro-USB port and has a proprietary charger.

All three security cameras can be placed on a table or mounted on a wall or ceiling. The retail boxes of the trio come with their base mounting plates and the screws you'll need to attach the cameras to their stands. You also get an instruction manual, plus a Micro-USB cable and power adapter with the Eve PT and Eve Cube. 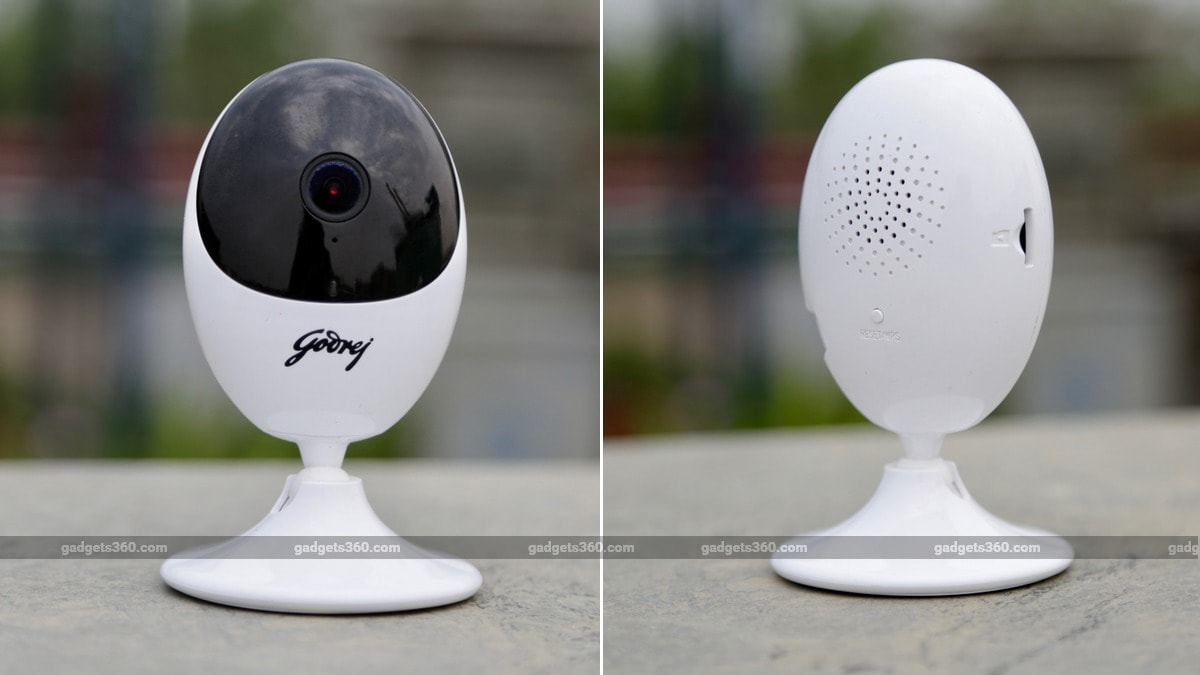 The configuration and setup process for all three Godrej security cameras is similar. You'll need the Godrej Eve app, which is available for both Android and iOS smartphones, and you'll also have to create a Godrej Eve user account. Once these cameras have been connected to a power source, you can search for them using the ‘+' button and then scanning a QR code that appears on the smartphone's screen using the security camera.

Once the scan is successful and your Wi-Fi credentials have been entered, the cameras go live and start recording video. There is an additional hassle, though. In order to watch a live feed on your smartphone or tablet, users will have to manually enter the device verification number printed on a sticker at the bottom of each unit. Also, if you intend to save footage to a microSD card, you will have to manually initialise it using the Godrej Eve app after inserting it into the camera's slot.

The Godrej security cameras lack support for the 5GHz Wi-Fi band, so users will have to make sure that their router supports the 2.4GHz band. The whole setup process takes around 10 minutes, and is assisted by step-by-step guidance in the app as well as audio instructions from the cameras. However, there is no guidance about how to activate the live feed in the app or instruction manual, which users will have to figure out on their own. We managed to do this after diving into the Godrej Eve app's Settings menu.

The Godrej Eve app's home screen shows a card for accessing the live feed of each security camera that you have connected to the same user profile. The live feed screen offers controls including full-screen view, multi-window view, video recording, capturing stills, and starting an audio call via the talkback feature. The Godrej Eve app has fewer features than the Xiaomi Home app, though. 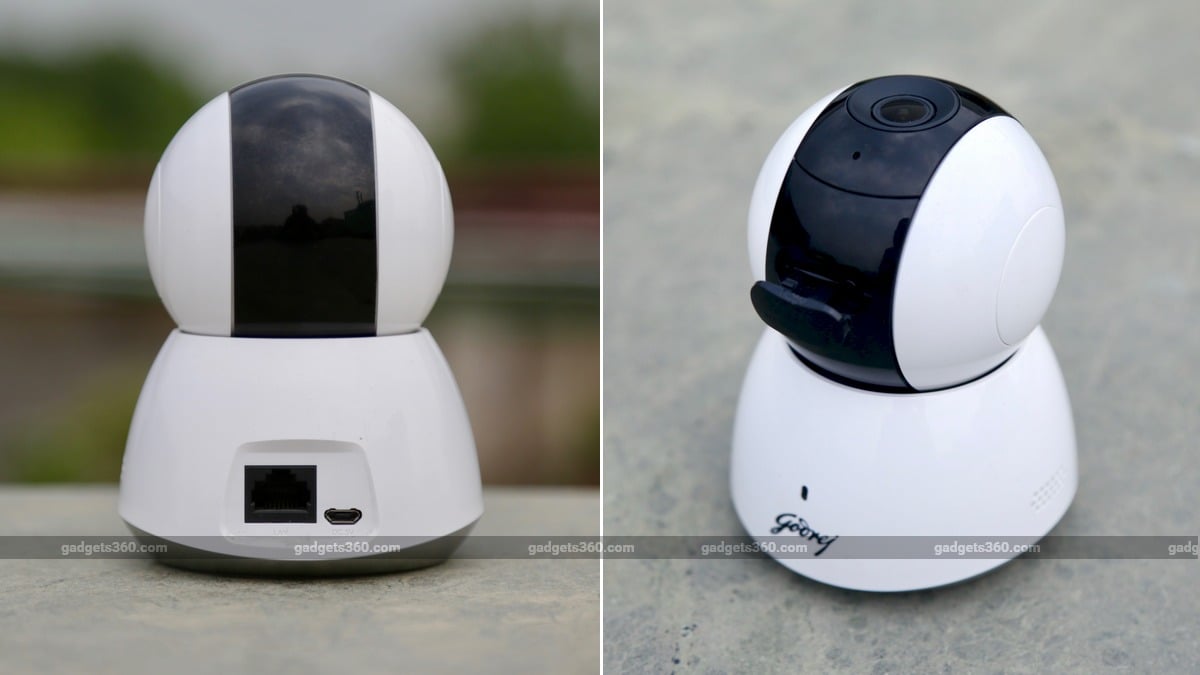 Godrej Eve PT looks a lot like the Mi Home Security Camera 360°, but lags behind in terms of features

The app allows users to switch between three different modes: Hi-Def, Standard, and Basic. The resolution of videos differs at each quality setting. The Godrej Eve PT and Eve Cube record video at 1920x1080 pixels in Hi-Def and Standard modes, while Basic mode has a resolution of 704x576 pixels.

The Godrej Eve Mini security camera, which has a slightly inferior 1.3-megapixel camera compared to the 2-megapixel sensor on the other two models, records videos at 1280x720 pixels resolution in Hi-Def mode, and 768x432 pixels and 512x288 pixels respectively in Standard and Basic mode. There's a monochrome mode for recording at night, using the cameras' IR LEDs.

As for the quality, the videos and images shot by the cameras are just decent. We wish that colours were a little more accurate and the brightness could have been better. In well-lit conditions, videos look sharp and have decent vibrancy, but in low light, videos and photos lose sharpness and saturation, and there is also a considerable amount of noise. Compared to the quality of videos and stills captured by the Mi Home Security Camera 360°, this trio of Godrej security cameras lag noticeably behind.

However, these shortcomings are somewhat compensated for when it comes to night mode. The IR LEDs help illuminate the frame so things like object edges can be captured with a decent amount of detail. The Godrej Eve mini - the lowest-end device of the bunch – does a surprisingly good job of recording night-time videos, but it also misses out on one important feature – audio talkback.

The Godrej Eve Cube and Eve PT's talkback feature allows users to communicate with people in the area where the camera has been installed. The audio coming out of the speaker is clear, but the cameras' microphones tend to pick up a considerable amount of noise and audio was somewhat distorted. 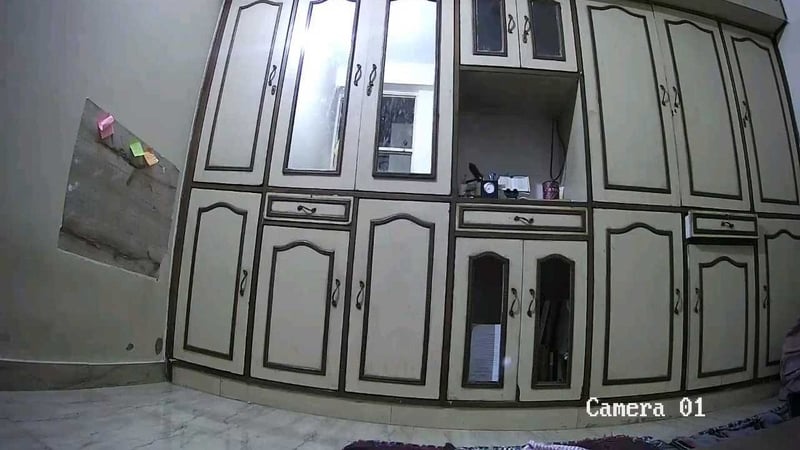 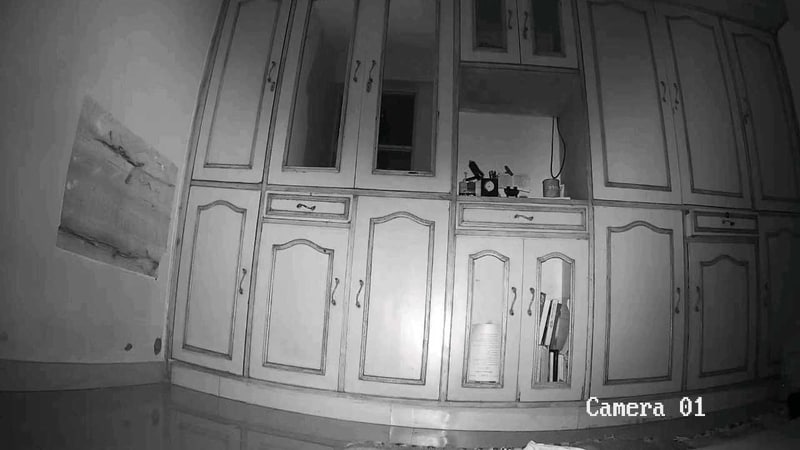 All three Godrej security cameras come equipped with motion detectors and can send notifications through the app whenever they detect movement. Unlike the Mi Home Security Camera 360°, which records a 10-second clip as soon as it detects motion, the Godrej offerings just send a notification alert, which on being tapped, opens the live feed.

Unless you use a microSD card, there is no automatic video recording feature, which can prove to be a major red flag if you can't react to the motion detection alert on time and access the live feed to see what is happening in the camera's view. However, one can mount a microSD card to let the camera save all the footage, which can later be viewed on a connected phone or tablet.

When users receive a motion detection alert after mounting a microSD card, they can tap on the notification to directly see that point of the recorded footage where motion was detected by the camera. The Godrej security cameras, unlike the Mi Home Security Camera 360°, do not offer cloud storage facility.

There are few other quirks with this security system as well. On recording a video or image, users can't see the media files immediately. Instead, you first have to open ‘My Album' in the Godrej Eve app and then move the desired files to another app like Google Photos in order to see more details and share or edit them. Moreover, all three Godrej security cameras take between 5 to 8 seconds to switch to night mode when the lights are turned off. The video feed could also have been smoother when camera angles are adjusted using the app.

The other two Godrej security cameras also fail to match Xiaomi's feature set and the overall value proposition, especially after considering options such as the Yi 720p HD Smart Security Camera priced at Rs.1,619 and the Yi 1080p Full HD Smart Security Camera, which can be purchased for 2,699. Then there is the underwhelming video quality, the relatively complex setup process, and the lack of features on the companion app. Taking all that into consideration, users can find much better value if they invest in one of the security cameras offered by Xiaomi or its Yi subsidiary.

product Godrej's Eve range of security cameras aim to leave a mark in the smart home segment, but do they offer enough value for the asking price? We find out in our review. 3 out of 5 stars