Amazon released the first Echo device in the US back in November 2014, kickstarting the smart speakers category as we know it today. Since then, Amazon has experimented with a range of Echo-branded devices across various form factors, including the Echo Look with a 360-degree camera, and the Echo Show and Echo Spot with displays to let you go beyond using just your voice for interaction.

At a special event in the US last September, Amazon went ahead and released a bunch of devices with the aim of taking its “Alexa everywhere” strategy to the next level. One such device is the Echo Input, which, at Rs. 2,999, happens to be the most affordable Alexa-powered device from Amazon in India today.

The Echo Input is a really simple device that's essentially an Alexa-powered smart speaker without the “speaker”. Designed to connect with your existing speakers via Bluetooth or an aux cable, it's essentially targeted at two different types of users.

The first is audiophiles who want to experiment with a voice assistant and music streaming, but have been put off by audio quality on offer with the majority of smart speakers. A device like the Echo Input lets them bring the power of Alexa to audio gear they already own and love, eliminating the need to purchase new, high-end smart speakers, which are few and far between to begin with.

The other obvious target is the customer who wants the smart speaker experience at the lowest possible price. You'll, of course, need to own — or buy — a speaker of some kind to use alongside. The Echo Input is also for anyone who's looking to keep the “smarts” separate from the audio output device, which can be picked (and upgraded) based on the budget and use case — think of it as buying a media streaming device to go with your "dumb" TV, instead of a buying a brand new smart TV.

In terms of design, the Echo Input is the most “hockey puck” looking device we've come across. It's circular, about one-third the height of the Echo Dot, and is made entirely of plastic. It misses out on the fabric finish seen in majority of the newer Echo models, which makes sense, as there's no need for a speaker cover here.

The top has two buttons — a mic-off button for privacy, and the action button that can be used to summon the Alexa voice assistant if you don't wish to use the trigger word (“Alexa” by default). A status LED lights up in blue when the device is listening or giving output, and it will light up (briefly) in red if Bluetooth connection to the paired speaker is lost.

We used the Echo Dot and Echo Input side-by-side — with different trigger words, so as to be able to summon them individually — for several days. In our experience, the Input was just as good as the Dot in terms of far-field voice recognition. That's no surprise given both devices have four built-in microphones.

So, for the most part, the Echo Input is just like the Echo Dot, minus the built-in speaker. Which means, if you are just looking to add the convenience of voice controls — and everything else that comes with Alexa, more on that later — to your existing speakers, the Echo Input is probably the most affordable way of doing just that. With that said, if you are willing to spend just a little bit extra, we would recommend getting the Echo Dot instead. Here's why.

For starters, it's worth remembering that the Echo Dot (and many other members of the Echo family) can also be connected to any external speaker of your choice via Bluetooth or the 3.5mm audio port, just like the Echo Input. So, that's all of Echo Input's functionality covered — and that built-in speaker will still come in really handy at times, as our time with the Echo Input showed.

Many speakers are designed to turn themselves off if they don't receive an input — no pun intended — for a specific amount of time. If your Echo device is paired with such a speaker, and it turns itself off — or drops the connection due to any other problem — you might miss out on, say, an important reminder. The Echo Dot will fall back to using its built-in speaker in a similar situation.

Note that this is applicable only if you are using a Bluetooth speaker — if an Aux-cable is plugged into your Echo Dot or Echo Input, neither device has any way of knowing whether or not the speaker at the other end is switched on, or indeed if there's a speaker connected at all.

The Echo Input is meant to instantly alert the Alexa app on your smartphone whenever it detects that Bluetooth connection to the speaker has been dropped, so you will have the chance to rectify the situation. However, if you aren't near your phone, you might not see the alert at all, and may never realise what has happened. What's more, during our test period, we didn't always get these alerts when we manually switched our Bluetooth speaker off, so there are question marks about the reliability of this feature. 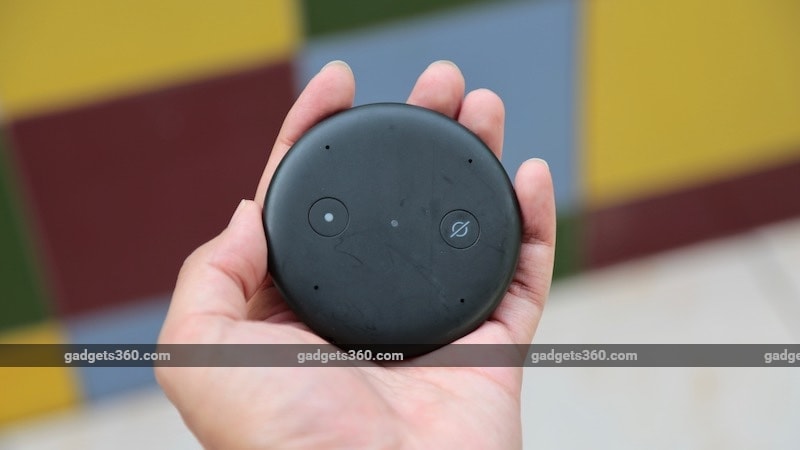 Given its size and the fact that's powered via a Micro-USB port (i.e. one less charger to carry), we thought the Echo Input would make a good travel companion, especially since we already travel with a portable speaker. So we threw the Echo Input in our bag on a recent trip in the hope that we could go about our usual routine of asking Alexa about the weather and to set alarms. We, of course, forgot about one thing — hotel Wi-Fi.

Most hotel Wi-Fi networks, unfortunately, require you to log in with a username/ password on a webpage. There's no straightforward way to get Echo devices to connect to such networks. This means that unless you are staying at a property with open Wi-Fi or travel with your own Wi-Fi router, using the Echo Input (or any other Echo device for that matter) on the road isn't very practical. The fact that you will have to manually set the location of your Echo device via the Alexa app every time you travel to a new place also makes the whole process rather inconvenient.

In terms of the actual “smarts” of the speaker, using Alexa on the Echo Input is exactly the same as using it on any other device. We've covered Alexa extensively elsewhere on this site, but to summarise our findings, while Skills — third-party voice apps that extend Alexa's capabilities — give Amazon's assistant an advantage over the competition, Google Assistant might still have the edge when it comes to some everyday tasks.

For example, thanks to Google Maps and real-time traffic information, Assistant on Google Home can tell you how much time it will take to travel to any place in your city (and beyond), while Alexa is restricted to places like Home and Work that you've predefined in the app. It tries to guess the place based on what you are saying, but it's more miss than hit. Google Assistant will even throw directions onto your Android phone as a nice bonus.

But Alexa has gained a few new features since we last reviewed an Echo device, including “follow-up mode” (needs to be enabled manually) — which lets you have a continuous conversation with the assistant. This also means it has become better at understanding context in some cases. For example, sample this conversation we had with Alexa through the Echo Input:

“Alexa, which is the biggest state in India?”
“The largest Indian state is Rajasthan”
“What is its capital?”
“Rajasthan's capital is Jaipur”
“What is its population?”
“According to the latest Indian census in 2011, the population of Rajasthan is about 6 crore…”

Now while we expected Alexa to return Jaipur's population in reply to the last query, we can understand why it decided we were still talking about Rajasthan, and that's a mistake that any human could've made as well. What's more, follow-up mode didn't always work, but that's down to Alexa's own limitations, which we've noted elsewhere. It's also worth pointing out that follow-up mode works only when your Echo Input is connected to a speaker via an aux cable and will not work over Bluetooth, possibly due to potential latency issues.

So, to summarise — and repeat what we said earlier — while the Echo Input is a great way of adding smart capabilities to a speaker with Bluetooth connectivity or aux-in port, if you can afford it, we recommend getting the Echo Dot instead. It can do everything that the Echo Show can and the built-in speaker will come in handy at times. Oh, and if you wait for the inevitable Amazon sale, you'll likely be able to purchase the Echo Dot at the price that the Echo Input usually retails at — of course, the Input would probably be cheaper still thanks to a discount of its own, but let's not go down that rabbit hole.

product Echo Input is the most affordable Alexa-powered device from Amazon, brining the convenience of voice controls to your existing speakers. 3.5 out of 5 stars