Now, take your Echo speaker with you wherever you go.

The Amazon Echo Input Portable is priced at Rs. 4,999 in India

The Amazon Echo series of smart speakers are popular thanks to great features, reliable functionality, and the growing capabilities of Amazon's Alexa voice assistant. With more music streaming services being added and new skills being developed, the product range continues to improve and offer great value to users. However, there's one big limitation with most smart speakers, including the Echo series; they have to be plugged in all the time, so you can only practically use them in one place.

That limitation is a thing of the past with the Amazon Echo Input Portable. Priced at Rs. 4,999, this Echo smart speaker has a rechargeable battery that lets the device be carried around and used anywhere. We review the new Echo Input Portable to find out how the Alexa experience is on the go. 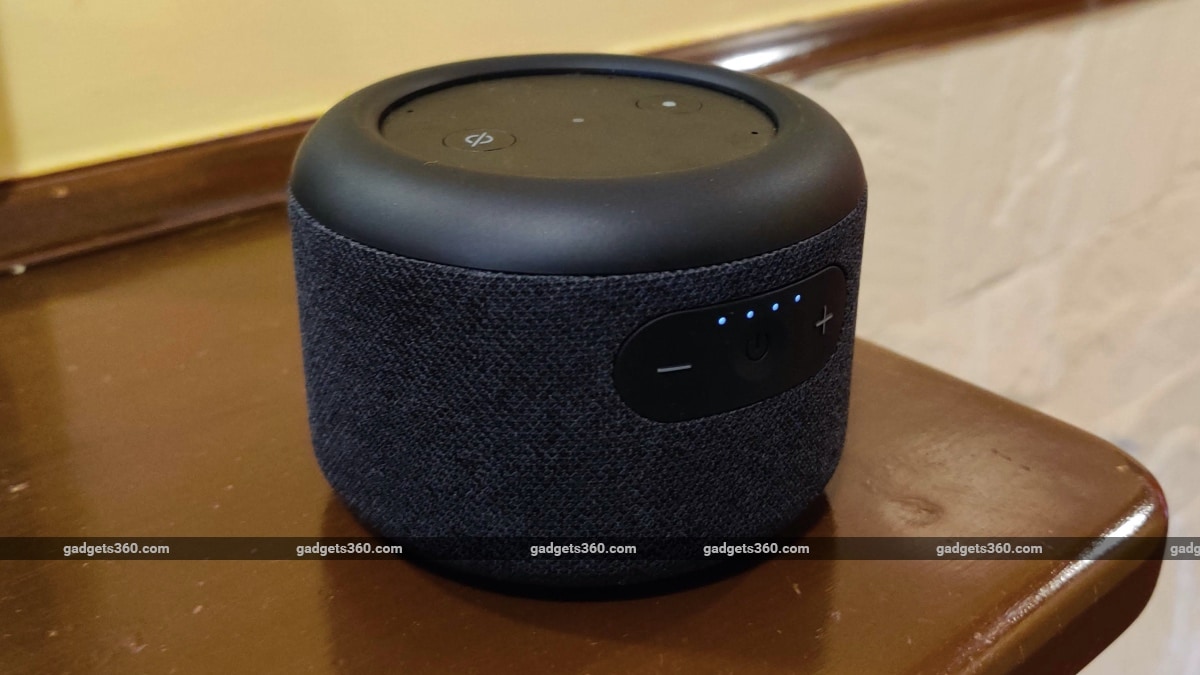 The new Echo Input Portable is obviously not as large as the Echo (3rd Gen) (Review) or Echo Studio (Review). However, it is a hint larger than the Echo Dot with Clock (Review), and has similar specifications and capabilities as well.

Driving the Echo Input Portable is a single 1.5-inch speaker, and you can stream music over Wi-Fi or connect to a Bluetooth source device to play audio. The key feature of this speaker is its 4,800mAh battery which lets you use it off the power adapter. Unlike other Echo devices, the Echo Input Portable can be unplugged and carried around with you; you can conveniently place it anywhere in your home or even take it outdoors, as long as you're within your Wi-Fi coverage area.

Amazon recommends keeping the speaker plugged in whenever possible, but the option of placing it anywhere freely makes it a welcome addition to the range, in our opinion. We often carried it around our house with us during our time with it, relying on the battery rather than having to find a convenient place to plug it in.

That said, the Echo Input Portable still needs to be connected to the Internet for its core functionality. Streaming music or talking to Alexa requires that you remain within your Wi-Fi coverage area, or you can use a mobile hotspot.

You can use the Bluetooth connectivity even without an Internet connection, which makes this the first Echo speaker to bridge the gap between portability and smart connectivity.

The Echo Input Portable is a little larger than the Echo Dot, and looks a bit more rugged. The Action and microphone mute buttons are on the top of the speaker, while the volume and power buttons are on the front. Having a power button is new, and this is obviously needed given the portable nature of the speaker; plug-in Echo devices are intended to always stay on and be available as long as they are plugged into a power outlet. The Echo Input Portable does always stay on when plugged in, and the power button only works when it's running on battery power.

The classic light ring of other Echo devices hasn't been incorporated into the design of the Echo Input Portable; instead, there's a small indicator at the top that serves the same purpose, most likely to save power. The microphones at the top are always listening for voice commands when the speaker is switched on. The back of the device only has a dated Micro-USB port for power and charging; there is no 3.5mm port for external connectivity. The use of the ‘Input' name is a bit confusing, since this device doesn't function at all like the Amazon Echo Input, which serves as a voice input adapter for non-smart speaker systems. 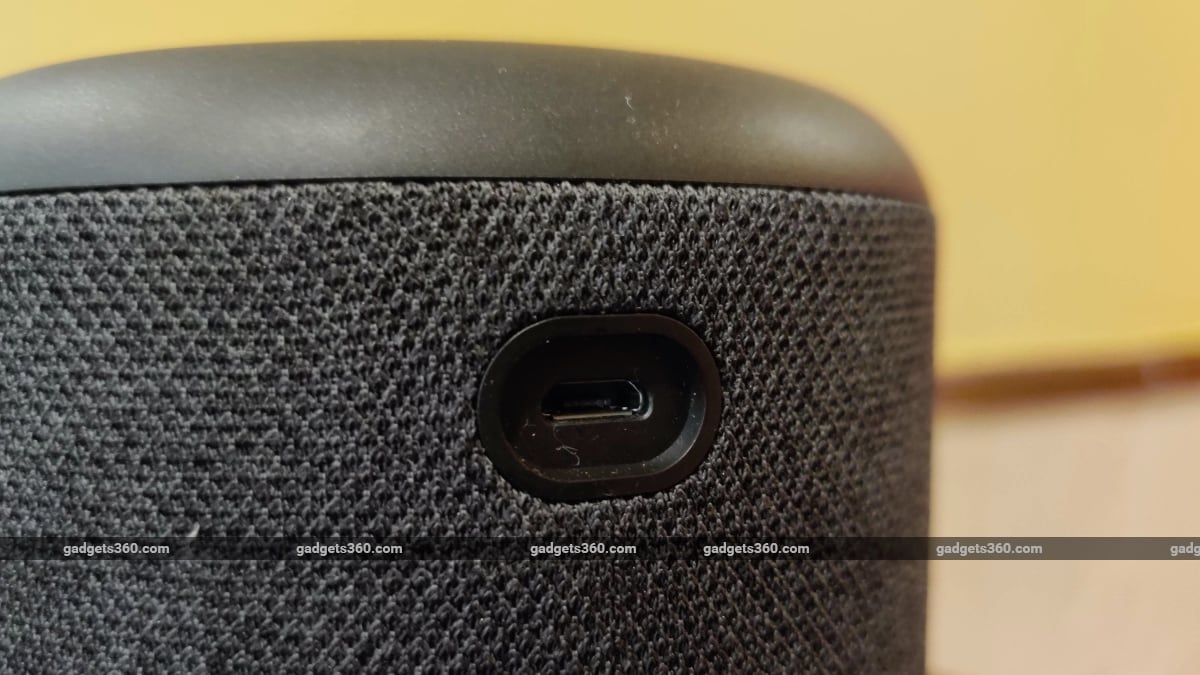 Although a bit bulky, we liked the shape and size of the Amazon Echo Input Portable. The bottom has a grippy rubber base, and the sides are fabric-wrapped. While we usually used Alexa and its music capabilities, we occasionally used Bluetooth connectivity as well. This will come in handy outdoors, and when internet connectivity is sketchy.

We were able to run the Amazon Echo Input Portable on its battery for around seven hours, with a mix of playing music over Wi-Fi and Bluetooth, voice commands and responses from Alexa, and leaving the device in standby. This is decent considering the size and functionality of the speaker.

We weren't particularly impressed with sound quality on the new Amazon Echo Dot With Clock, so we weren't expecting too much from the Echo Input Portable given its similarities in terms of driver size and form factor. However, we were pleasantly surprised with its overall performance. The speaker naturally sounded best when streaming music over Wi-Fi, and was loud enough for personal use, or even for multiple people in a small room.

We have reviewed speakers with Alexa capabilities in the past, including the affordable Boat Stone 700A and the premium Sony SRS-XB402M. The Amazon Echo Input Portable is similar to the former when it comes to price and size, and the latter when it comes to connectivity and function. It connects directly to your Wi-Fi, whether through a fixed connection or mobile hotspot, and doesn't need a companion app to function (after the initial setup through the Alexa app, of course). The big advantage here is that you can use the entire suite of Alexa features, including communications and Alexa Skills.

The microphones worked well to detect Alexa voice commands and understand instructions clearly, and we found the experience as fluid and efficient as always. Amazon claims to have optimised Alexa in India to work well on hotspot connections which tend to be slow and patchy, and this did show in our experience with the Echo Input Portable.

Sound quality on the Echo Input Portable was decent, and pleasantly competent for such a small Echo device. Streaming music over the Internet, we liked how clean and detailed the sound was. Listening to Your Love by Mark Knight, the deep and impactful lows of the track sounded great for such a small portable speaker. 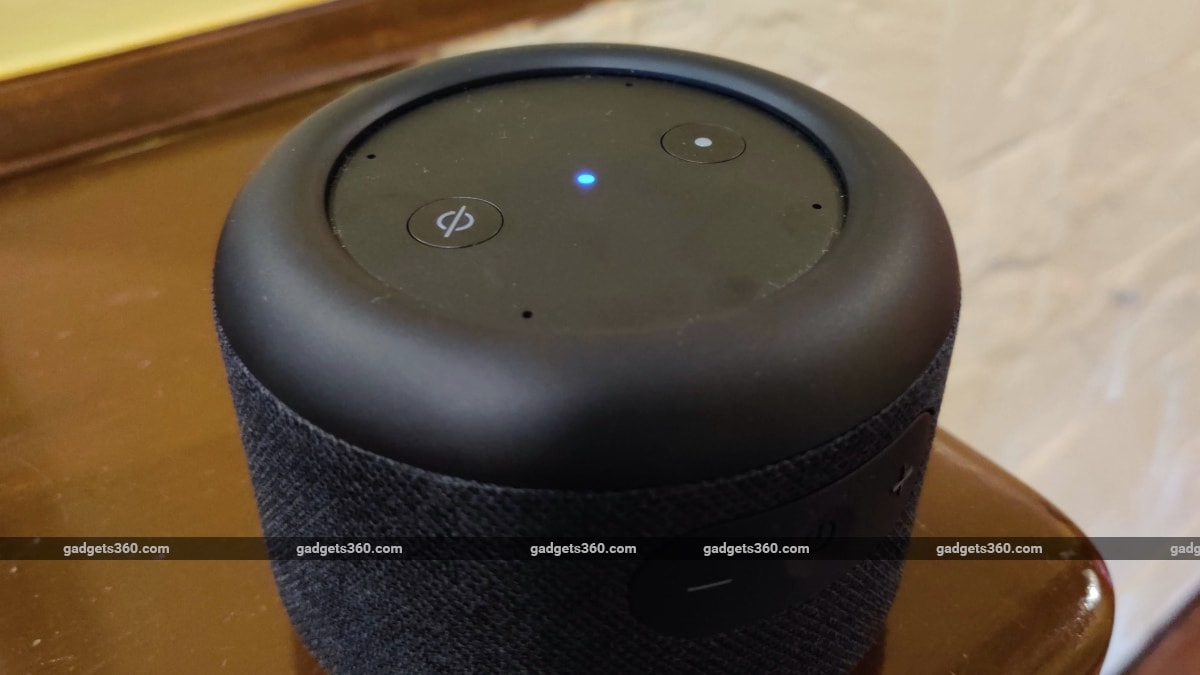 Moving on to Subways by The Avalanches, we were impressed with the quality of the vocals. Echo devices are typically geared towards the mid-range to ensure that Alexa is heard clearly, but we found the sound to be fairly balanced on the Echo Input Portable, with plenty of detail to be heard across the range in this sample-based house track.

Switching to Bluetooth, we found the sound to be a bit too soft for our liking. When used with an Android smartphone, the volume controls across both devices were synchronised, and even at the highest volume, the speaker was a lot softer than when streaming music using Alexa. Soft tracks such as If I Was A Folkstar by The Avalanches could only clearly be heard from about two feet away, sounding too dull from any farther. Louder, busier tracks had a bit more bite to them. On the whole, we weren't too thrilled with the lack of volume, especially considering that buyers looking for a portable battery-powered speaker will typically rely on Bluetooth to listen to music.

The Amazon Echo Input Portable is the first Echo device to work on its own built-in battery, and is quite capable in terms of this newfound portability. If you're using the device at home, you can place the speaker wherever you are in the house, without needing to worry about where the nearest power socket is.

If you're outdoors or somewhere you can't get a fast and reliable Wi-Fi connection, the device works just fine on a mobile hotspot. Either way, you get the familiar Alexa and music streaming experience with good sound quality, along with impressive battery life for a speaker of this size.

Further reading: Amazon, Amazon Echo Input Portable, Alexa, Smart Speaker
Ali Pardiwala Email Ali
Ali Pardiwala writes about audio and video devices for Gadgets 360 out of Mumbai, and has covered the industry for a decade now. Ali is a Senior Reviewer for Gadgets 360, where he has regularly written about televisions, home entertainment, and mobile gaming as well. He is a firm believer in 4K and HDR on televisions, and believes that true wireless earphones are the future of the personal audio industry. Ali is available on Twitter as @AliusPardius and on email at alip@ndtv.com, so do send in ...More
Realme 2 Pro Gets RMX1801EX_11_C.27 Update With Airtel, Jio VoWiFi Calling Support, Users Report
TikTok Guidelines Asked Moderators to Suppress Ugly, Poor, or Overweight Users: Report