Smart speakers have seen a surge in popularity in the global market thanks to a variety of offerings from major tech giant such as Apple, Google, Samsung, and Amazon. A new report now suggests that the international smart speaker market grew a humongous 187 percent in the second quarter of 2018, with total shipments touching 16.8 million units in the same quarter. Amazon and Google topped the list with ultra-affordable offerings like the Amazon Echo Dot and Google Home Mini that are both priced below the $50 (approximately Rs. 3,500) price barrier.

As per the report released by research firm Canalys on Thursday, Google took the first spot with its Google Home variants shipping 5.4 million units, an astonishing 449 percent growth from Q2 2017. In the same quarter, Amazon shipped 4.1 million Echo devices, both companies benefiting from international market expansion into European and Asian markets. Despite international expansion, the US market accounted for 68 percent of Amazon Echo shipments and 58 percent for Google's Home range. 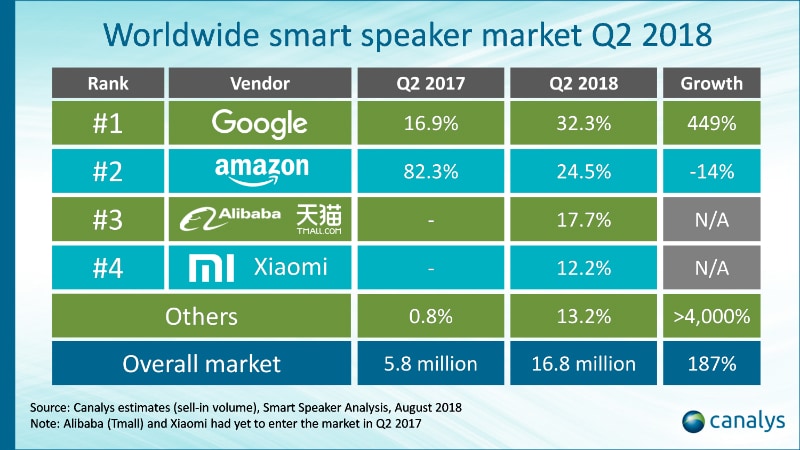 Third and fourth position in the list went to Alibaba and Xiaomi, respectively, contributing to China's prowess as the fastest growing market for smart speakers in Q2 2018. Alibaba commands a 50 percent market share in the country having sold 3 million units of its Tmall Genie speakers in the second quarter this year. Xiaomi recorded 2 million shipments for its Xiao AI-powered speakers.

"Alibaba and Xiaomi have both relied on aggressive price cuts to create demand. Both companies have the financial backing to spend on marketing and hardware subsidies in a bid to quickly build their user bases," said Hattie He, Canalys Research Analyst. "Although the real level of user demand for speaker products is currently unproven, China is on its way to overtake the US in the near term. The challenge remains for local vendors to increase user stickiness and generate revenue from the growing installed base of smart speaker users."

Other smart speaker manufacturers accounted for the remaining 13.2 percent share in the smart speaker market in Q2 2018. With an expanding market for smart speakers, the smart home gadget is trickling into certain verticals including hotels, retail, hospitals, and other business establishments.