Apple HomePod 'Built Like a Tank' but Very Hard to Repair: iFixit

Just days after its initial availability in few developed markets, DIY repair authority iFixit has managed to get the HomePod for a detailed teardown. The iFixit teardown, which involves 19 steps, highlights the major challenges in repairing the latest smart speaker by Apple. It also shows what makes the HomePod a distinct offering compared to the Amazon Echo and Google Home speakers. The HomePod went on sale in the US, UK, and Australia last week with a price tag of $349 (roughly Rs. 22,400).

The iFixit team says that the HomePod is "built like a tank" with an enhanced durable design that is not easy to destroy. The robust build of the HomePod is covered with a 3D acoustic mesh that protects the internal components from dust and debris. Dismantling the tank-like build is not difficult, and the iFixit folks thus used a heat gun to peel panels off from the top, and a knife helped to cut through the wire mesh. There is a drawstring all along the mesh to offer a non-destructive way to get into the HomePod, though. The mesh is found to have a net-like layer on the top and bottom with some tiny wiry coils in between, allowing sound waves to travel through fabric with minimal reflection. After slicing the mesh, iFixit mentions the presence of a secondary, internal fabric sleeve that protects internals.

Once the mesh was removed, the iFixit team used a small hacksaw to release the woofer from the top. The woofer features a board on its top that includes a Texas Instruments-made LED driver and a Cypress programmable SoC that work in tandem with Siri and offers a cloudy look. Further, the main logic board that [has the Apple A8 chip, which is likely to be coupled with 1GB of RAM, and includes 16GB NAND flash sits just above of the woofer compartment. 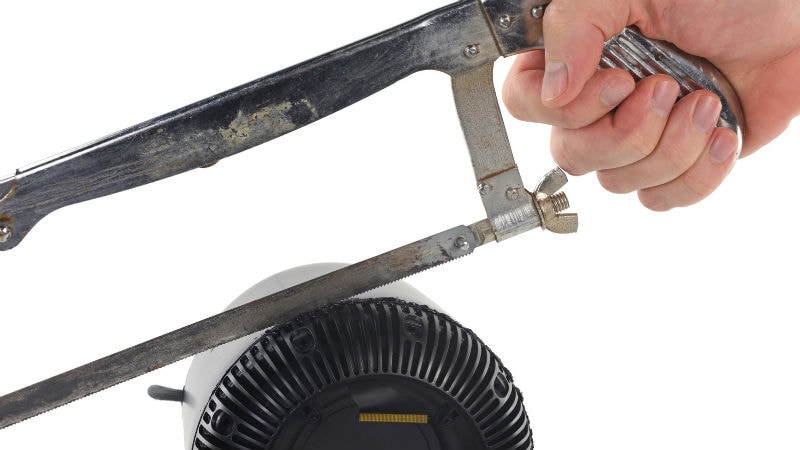 The iFixit team notes that Apple has increased the travel of the voice coil to add a massive magnet that results in quality bass notes. After examining the woofer, the iFixit team managed to get deeper into the HomePod and saw various components, including a horn-loaded tweeter that is aimed to increase a speaker's efficiency and control the direction of its sound - just as a gramophone. There are vents on the side of the voice coil bobbin on the tweeter that the iFixit team believes to help prevent air pressure from building up behind the tweeter to eventually limit audio distortion.

While Apple has used standard screws on the HomePod, iFixit states that some "very strong adhesives" secure most of the build, including the touch input cover, microphone array, and rubber foot. All this makes it quite difficult to repair the Apple speaker - even at a professional lab like the one owned by the iFixit folks. Thus, the HomePod has received a repairability score of 1 out of 10 on iFixit's meter.