When Apple's HomePod smart speaker went on sale in January, it entered a market pioneered and dominated by Amazon's Echo lineup of Alexa-powered devices. Apple, which has arrived late before only to overtake rivals by building better products, has been touting the HomePod's superior sound quality. It's demonstrably good, but so far hasn't enticed many consumers to part with $349 (roughly Rs. 22,800).

By late March, Apple had lowered sales forecasts and cut some orders with Inventec Corp., one of the manufacturers that builds the HomePod for Apple, according to a person familiar with the matter.

At first, it looked like the HomePod might be a hit. Pre-orders were strong, and in the last week of January the device grabbed about a third of the US smart speaker market in unit sales, according to data provided to Bloomberg by Slice Intelligence. But by the time HomePods arrived in stores, sales were tanking, says Slice principal analyst Ken Cassar. "Even when people had the ability to hear these things," he says, "it still didn't give Apple another spike." 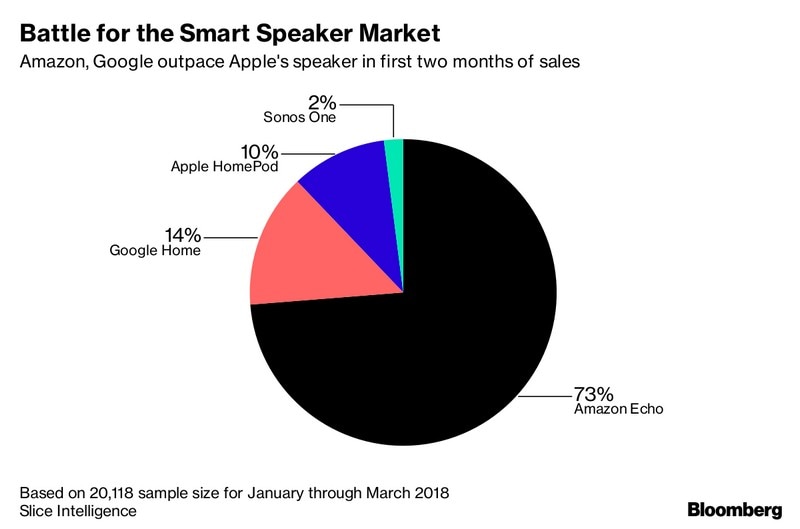 During the HomePod's first 10 weeks of sales, it eked out 10 percent of the smart speaker market, compared with 73 percent for Amazon's Echo devices and 14 percent for the Google Home, according to Slice Intelligence. Three weeks after the launch, weekly HomePod sales slipped to about 4 percent of the smart speaker category on average, the market research firm says. Inventory is piling up, according to Apple store workers, who say some locations are selling fewer than 10 HomePods a day. Apple declined to comment.

Apple had an opportunity to put the HomePod at the centre of a new ecosystem of smart home and other gadgets that aren't glued to the iPhone. But the small, wireless speaker is not that product. Though the HomePod delivers market-leading audio quality, consumers have discovered it's heavily dependent on the iPhone and is limited as a digital assistant.

Veteran Apple analyst Shannon Cross says consumers assumed the HomePod would be able to do many of things the Echo and Google Home can do-answering questions, orderings pizzas and much more. Instead the HomePod is mostly limited to playing tunes from Apple Music, controlling a limited number of Apple-optimised smart home appliances and sending messages through an iPhone. That's a serious disincentive, Cross says, when the Apple speaker costs $200 more than most smart speakers.

Despite having all the ingredients to become a serious competitor to the Echo-including Siri and the App Store-Apple never saw the HomePod as anything more than an accessory, like the AirPods earphones, according to people who worked on the product. When the Echo debuted four years ago as Apple engineers were toiling away on early versions of the HomePod, their bosses continued to see the product as a high-quality speaker rather than a voice-controlled digital assistant for the home.

To make matters worse, the device missed its December release date, meaning the HomePod wasn't available during the pivotal holiday shopping season when smart speakers were among the most sought-after products.

When the HomePod finally shipped, consumers found they couldn't pair two speakers and create stereo sound or play music in multiple rooms. Apple has said these functions will be available this year, and the latest iPhone software update in beta with app developers suggests they are in advanced testing. Some HomePod buyers also complained that the device leaves marks on wood, a situation Apple is now working to rectify with a new material, according to people familiar with the work.

Apple often says it doesn't strive to sell the most units in any particular category and points to revenue and user experience instead. During the opening pre-order weekend, the HomePod grabbed 72 percent of revenue in the smart speaker category. But in February and March, its share of revenue slipped to 19 percent, according to Slice Intelligence, compared with 68 percent for Amazon. Google Home and Sonos Ones garnered 8 percent and 5 percent of revenues, respectively. (Slice estimates sales by monitoring credit card data, loyalty card use, e-commerce receipts sent to email inboxes and other information.)

Gene Munster, a co-founder of Loup Ventures and a long-time Apple watcher, expects HomePod sales to pick up in the holiday shopping season. He says Apple will probably sell 7 million HomePods this year and close to 11 million in 2019. By contrast, Munster predicts that Amazon will sell 29 million Echos this year and 39 million in 2019. Alphabet, he estimates, will move 18 million Google Homes in 2018 and about 32 million the following year.

The HomePod will almost certainly improve. Not every Apple product was a hit out of the gate. The Apple Watch faced challenges when it launched, too, and is now widely recognized as the top performing smartwatch on the market (although still a tiny part of its maker's business).

The HomePod is part of Apple's growing ambitions in music hardware, which will include upgraded AirPods this year and new over-ear, studio-quality headphones in 2019. So Apple can be expected to regularly update HomePod software alongside the iPhone. Just as the company revamped the Apple Watch's interface a few years after release, it could shake up the HomePod's features. Siri remains a major weakness but the poaching of Google's artificial intelligence chief earlier this month could make a difference.

Still, Amazon and Google will keep ratcheting up the competition, coming out with regular iterations of their own smart speakers that sound better and do more.