Amazon Echo Spot With a Circular Display Launched in India 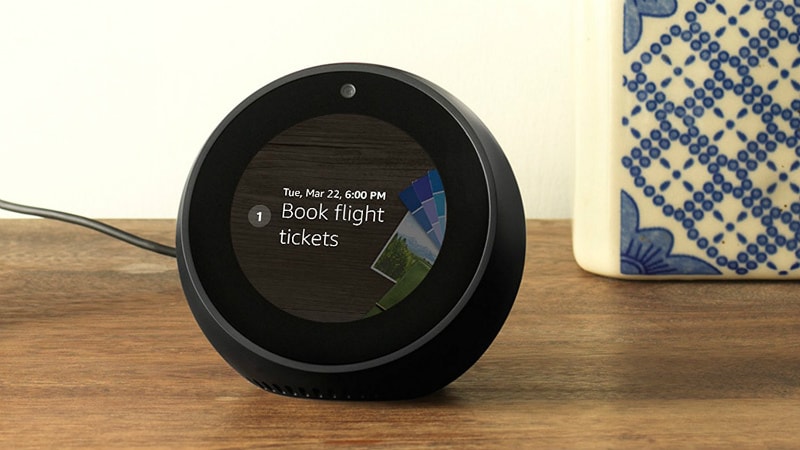 Expanding the use cases of Alexa assistant and to counter the newly arrived Google Home family, Amazon has now launched Echo Spot in India. The new Echo device, which was originally announced in September last year, blends the voice of Alexa with a screen that is designed to show online information. The Echo Spot is available for purchase in the country via Amazon.in as well as through Amazon devices kiosks in Bengaluru and Mumbai, and over 350 offline retail outlets across 20 cities in the country. It comes in Black and White colour options with a price tag of Rs. 12,999. As an introductory offer, Amazon is selling the Echo Spot at Rs. 10,499 through its site and select retailers across the country, including Croma, Reliance, and Vijay Sales, for a limited period. The company has also tied up with ICICI to offer an additional 10 percent cashback on purchase of Echo Spot and other Echo devices.

Unlike the previous Echo devices, including the Amazon Echo, Echo Plus, and Echo Dot, the Echo Spot features a 2.5-inch circular display. The display can be used to watch video news briefings from sources including NDTV or play movie trailers from services such as Amazon Prime Video, Dailymotion, and Vimeo. It can also be used to read questions and answers given by Alexa. Prime members can additionally leverage the display of the Echo Spot to see product image, title, price, and user ratings before making their orders on Amazon using their voice. Furthermore, the Echo Spot comes with a front-facing camera sensor that enables Alexa-to-Alexa voice-controlled video calls. The front camera can also be used to send a video message. Video calls and messages work between any two Echo Spot devices and on Android and iOS devices using the Alexa companion app.

Amazon has provided a Drop In feature that is designed to recreate the feeling users get when their closest family or friends drop by for a visit, or when they walk into another room to talk with someone in their family. The same feature is also available for the Echo Dot, Echo, and Echo Plus smart speakers, though it enhances the experience specifically on the Echo Spot by letting users virtually visit the living room to see their loved ones.

Similar to other Echo devices, the Echo Spot is powered by the second-generation far-field technology that uses four microphones. The device also has an acoustic beam-forming technology and enhanced noise cancellation support. There is Bluetooth connectivity and a 3.5mm Aux-in port to let you transform the Echo Spot into a home entertainment system. Moreover, music lovers can browse songs on the device by asking Alexa to show or play songs by genre, artiste, decade, composer, and film language. There is also a multi-room music feature that helps synchronise music across multiple Echo devices.

When idle, the Echo Spot can be used as a nightstand to view clock or calendar, catch weather update, set music alarms, or turn room lights on and off. The device has a 1.4-inch driver and measures 104x96x91mm. All in all, the Echo Spot sits between the highly affordable Echo Dot and the premium Echo Show.

"Echo Spot combines the popular design of the Echo Dot with the added benefit of a display," said Jayshree Gururaj, Director - Amazon Devices. "With the screen, Alexa adds an enriching visual experience to voice activation and control. We are excited to bring Echo Spot to our customers in India."