Amazon Echo Input Portable is available for pre-orders with an introductory price of Rs. 4,999.

Amazon Echo Input Portable, a new smart speaker that is designed to deliver hands-free Alexa access on-the-move, has been launched in India. With looks similar to the existing Echo speakers, the Echo Input Portable is touted to deliver 360-degree audio experience to customers alongside offering far-field voice recognition. The smart speaker includes an array of four microphones to enable conversations with Alexa assistant from across the room. However, what primarily makes the Echo Input Portable different from all the existing Echo speakers -- including the ultra-portable Echo Dot -- is the built-in battery that is rated to deliver up to 10 hours of continuous music playback on a single charge.

Consumers can use the Amazon Echo Input Portable just like how they would use any of the existing Echo speakers. This means it serves Alexa to the masses and provides them with the ability to play music, listen to the latest news or weather alerts, or set an alarm by simply passing voice commands. There is a speaker driver as well as the four-microphone array to enable a smart speaker experience.

Having said that, Amazon has provided a built-in 4,800mAh battery to distinguish the experience to some extent and to cater to new use cases. One of them could be to use the Echo Input Portable to get a portable Alexa experience that can move from one room to another. The other use case that Amazon presumes could be to bring Alexa closer to kids.

"Typically kids, they don't [remain] in the same place -- either to do studies or to do their homework or even to play, they just move around the place inside the home. And we believe that the kids could just carry this one [Echo Input Portable] from one room to another room as they casually start learning," said Parag Gupta, Head of Amazon Devices India, during a media briefing in New Delhi.

Consumers can also control their smart home devices such as smart lights or plugs by using voice commands through the Echo Input Portable. Similarly, it allows to stream music from services such as Amazon Prime Music, Apple Music, JioSaavn, Gaana, and Hungama Music as well as gives access to listen to audio books from Audible and Kindle while moving around the home. There is also Bluetooth connectivity to stream audio to wireless speakers. However, there isn't the option to get a stereophonic experience by connecting multiple Echo Input Portable -- the functionality that exists on devices such as the Echo and Echo Plus.

The Echo Input Portable is built on the same hardware architecture that debuted with the Echo Input, which Amazon unveiled back in September last year and launched in India in January -- though the built-in speaker and battery pack are new. There are physical volume buttons to increase or decrease the audio as well as a power button to shut down the device. Further, a dedicated mute button is available on top of the Echo Input Portable to let users electrically disconnect the onboard microphones. The speaker comes with a 4-LED battery indicator, however, the iconic LED ring that's featured on existing Echo speakers isn't present. 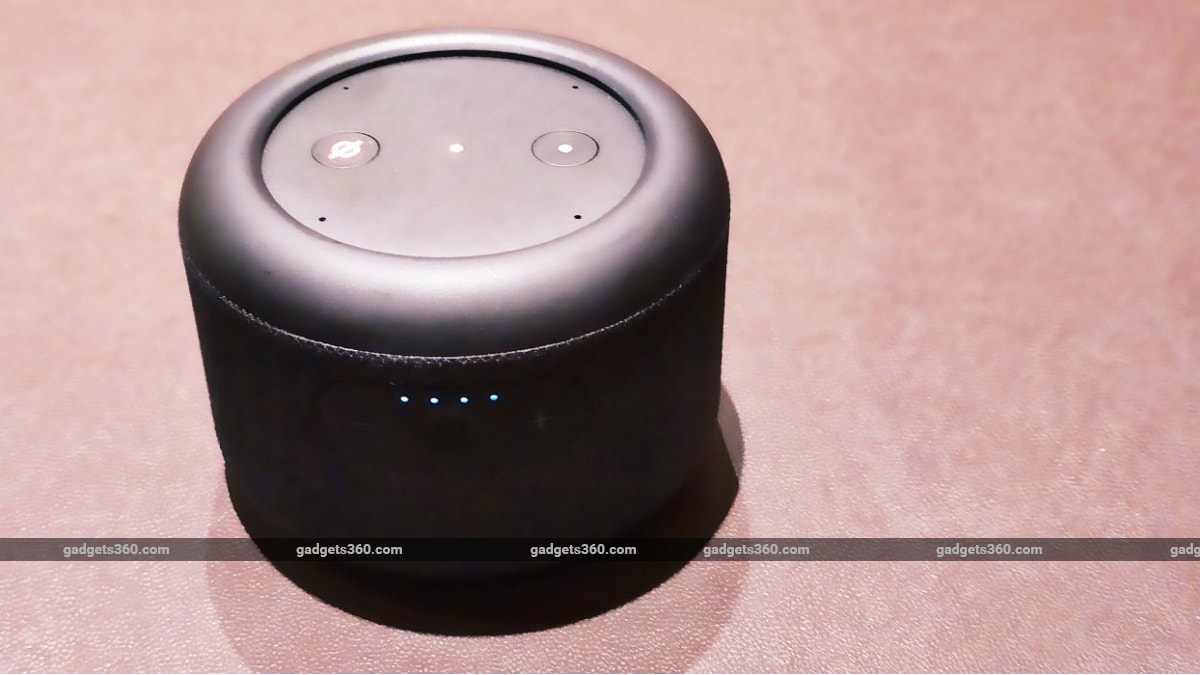 Amazon has provided a Micro-USB port for charging the Echo Input Portable. However, if you're set to connect the new speaker with your smartphone or a home theatre system through a cable, a 3.5mm headphone jack isn't there to serve your purpose.

"The feedback that we were getting about things we want in our device was indexed on portability in India," said Gupta.

The Amazon Echo Input Portable is available for pre-orders in a single black fabric design option at an introductory price of Rs. 4,999 (actual price of Rs. 5,999). Customers can pre-order the smart speaker through the Amazon India site, and it will be started shipping from December 18. Moreover, the device will be available for experience at Amazon devices kiosks located in shopping malls across the country. For now, the Echo Input Portable is exclusive to India.