Google Home in India: Why Google and Flipkart Believe the Time Is Right 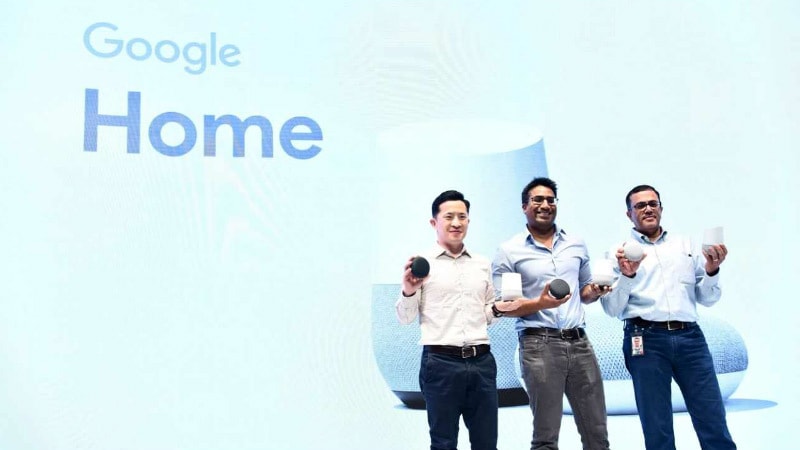 More than a year after its launch in the US, Google this week brought the Google Home to India. The smart speakers, which are competing in India with the Amazon Echo lineup are available here in two variants, Google Home and Google Home Mini. Both of these give you access to the Google Assistant and Google services through voice commands. Alongside major Google services, the Google Home speakers also support a number of third-party services including Netflix, and music services like Gaana and Saavn. Beyond entertainment though, Flipkart - which is the exclusive online retail partner for Google Home - is optimistic about it driving the adoption of home automation products.

"Google Home is a great launch to essentially explode penetration and usage of home automation in India," Flipkart VP and Head of Electronics and Private Labels, Adarsh K Menon, told Gadgets 360 at the sidelines of the Google Home launch event in New Delhi. "Consumers want their lives to be simplified. Instead of using five or ten devices to run their lives, consumers have come back with the need that requires one single device to perform all of the necessary activities."

"Google Home is that integrated device," he added, saying, "On the part of the home automation segment, we are largely starting off right now. It's initially quite small, and how the category will scale up is majorly be a function of how we work with partners and brands like Google."

For that to happen, it's necessary to create awareness about Google Home, Menon added, in order to persuade customers to choose this new product in a market that has widely been dominated by smartphones; a market that is yet to move towards connected devices such as smart lighting solutions and smart plugs, among others. Both companies have stepped up their efforts to this end, and Flipkart will even offer home demos.

"When a consumer buys a Google Home speaker, he or she will also get access to home demos," explained Menon. "There is no installation required for the speaker since it's a DIY offering. But we'll educate customers on how to use it, taking them through a few use cases, and hence build adoption for the product."

Google also believes that smart home devices have a lot of potential in India, particularly if they're not reliant on a smartphone as the centre of it all.

"A smart home may be a little early particularly for India but I think you'll see a huge wave of new smart home devices because what's historically missed in a smart home is that originally smart homes were largely based on phones and to be honest a phone is not a great controller of your smart home," said Google VP of Product Management and General Manager of Home Products Rishi Chandra. "It takes a lot of time to take out your phone from pocket, unlock it, and then open the app. Voice control, on the other hand, what we found, at least globally, makes unblocking of smart homes in a quite easy and convenient manner."

Google's Rishi Chandra on Home, Assistant, and Everything Else in Between

To deliver an enhanced user experience, Google Home comes with a Voice Match feature that recognises up to six user voices to deliver appropriate results. "The great thing about Voice Match is that if I listen to Google Play Music and my wife listens to Gaana when she asks for her song to Google Home, it will play the song through the Gaana service and when I ask, it will play through the Play Music. It is because the feature helps the device recognises users' voice to deliver a personalised music experience," Chandra said.

Google also plans to bring Hindi support to Google Home later this year, and Chandra also specified that features such as Routines and Shortcuts will additionally be tweaked specifically for the Indian audience. Amazon's Echo speakers have been in market for longer though, with a larger ecosystem of apps, and have been localised to suit user feedback.

"We could wait it until we had a more robust ecosystem and various partners on board," Chandra said, adding, "but we felt like this is the right set - we have a great core product experience that we can deliver, and we kind of iterate from there. It's a trade off. But our core experience versus Amazon's is a little bit different. We are bringing a ton of services from day one to our Google Home speakers. These services include Google Maps, YouTube, Search, and Navigation. All this makes a core fundamental product right now."

Having said that, Google wants to expand the use cases of Google Home in India. Chandra described that the model as similar to what the company did at the time of launching Chromecast in the country. "We are going to continue invest in getting as much content as possible," he said. "We showed this with Chromecast that we started with a small set of partners initially but expanded with dozens and dozens of great top-tier content partners."

Google has also already opened up the ground for developers and services providers to integrate their experiences into Google Assistant by leveraging Actions on Google. "You'll see us investing in a variety of different verticals, how we can actually tie up with service providers to make their experiences deeply integrated into the product. It will take some time as we're just getting started," Chandra said.

When asked why Google didn't wait for the availability of services including Spotify in India for launching Google Home, Chandra added that it didn't make sense to just wait for a service. "The whole point of Google Home is that it touches all the great services that Indians are accessing in crazy scale numbers right now," he said. "We are open to working with any top-tier content providers. We want to make sure whatever Indian consumers listening to that we can make it voice enabled. That's our objective."

Unlike the Amazon Echo range that debuted in India last year with a bunch of complementary connected devices, Google has initially partnered with Philips to offer a Philips Hue and Google Home Mini in a special bundled package. The company is however set to expand this model by adding new hardware partners. It is also working to bring local Indian device manufacturers on board for building new experiences for Google Home consumers. "We've talked with Flipkart to see if there are local Indian device manufacturers that we should go, work with them alongside our global partners," Chandra revealed.

Flipkart's Menon stated that over a period of time, exclusive partnerships for complementary products specifically designed for Google Home will be rolled out in India. "We are closely working with the Google product team to stitch up a whole bouquet of apps and services to enhance ecosystem of the Google Home product," Menon told Gadgets 360.

Menon and his team are also working hard to ensure appropriate awareness of Google Home. Alongside arranging home demos, they're are educating people about the benefits of Google Home right through their platform. "We've deployed education-based content on our platform; it will be about educating the customer on various benefits Google Home can bring to his or her life," he added.