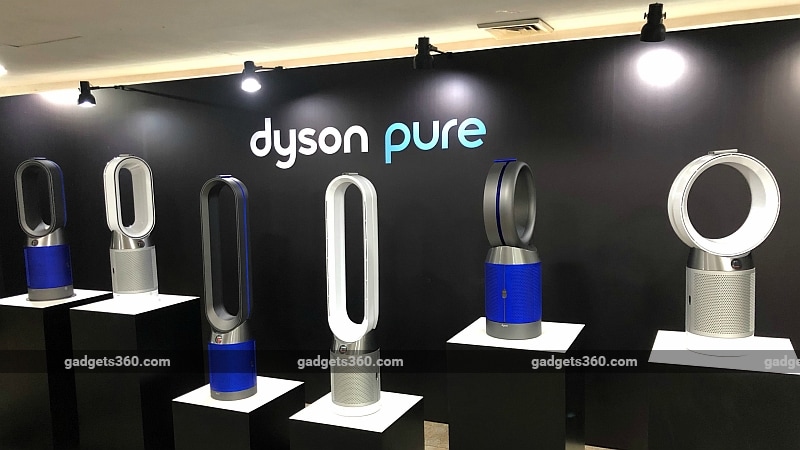 While many companies see India as a price-sensitive market, Dyson is optimistic about growing its presence in the country even with expensive products — by building a great reputation.

"For Dyson, it's more about our reputation in making really great products than money," Sam Bernard, Global Category Director, Dyson, told Gadgets 360 in a one-on-one conversation earlier this month. The British giant entered the Indian market in February last year. Initially, the company brought a limited range of vacuum cleaners, air purifiers, and hair dryers. Dyson expanded its portfolio by bringing its hair styler to India late last year and earlier this month launched its latest air purifier that comes with a heating element dubbed the Pure Hot+Cool.

Differentiating your products isn't easy, something Dyson knows all too well. Thus, the company actively works towards creating awareness about its products and highlights what advantages they have over the competition. This is especially important in a market like India where the company is a relatively new entrant.

"In India, that's a bigger problem than the rest of the world because in the rest of the world, we have a reputation," underlined Bernard. "And the reputation is we make different products but when you buy them, maybe they're a little bit more expensive than everyone else is, but they really work and that is the difference. In India, we can't rely on our [global] reputation, so we need to build that up here."

Bernard acknowledges that while it is difficult to build a reputation here, he believes that the early adoption and technology savvy nature of Indians will help Dyson build its brand value. "There are more engineers in India than I think there are people in England," acclaimed the executive. "The people here understand technology. Hopefully, that means they will appreciate the Dyson products [laughs]."

To convince the technology-savvy audience, Dyson wants to tick all the boxes, including giving an attractive piece of hardware that offers a smart, connected experience; specifically, when we talk about its air purifiers, Dyson wants to differentiate with its distinct design and levelled-acoustics.

Not Just Design and Function, Dyson Even Obsesses About How Its Appliances Sound to Your Ear

"We don't hide our technology," stated Bernard. "The machines look as they look, whether you like or hate that because the technology is pushed up front."

Having said that, the expensive price tags of Dyson products means they are reliant on word of mouth to spread the word in India. The company even recently stopped advertising its haircare products so that they will be marketed not directly through the traditional channels but by the people who are their initial users.

"We know that our products are expensive," acknowledged Bernard, "And what we do need is those early adopters who come in and help us start building our reputation. That's pretty critical."

India is indeed a young market for Dyson as the Malmesbury, Wiltshire-based company has just celebrated its first anniversary in the country. Nevertheless, the challenges in the Indian market are helping the company make its product ready not only for local users but also for its customers across the world.

"As in designing machines, it is interesting to come to India," said Bernard, adding, "You have similar challenges but often exaggerated and sometimes there are new challenges."

Bernard regularly sends his engineers to different parts of the world to let them understand different environments and then make new models capable of working in different conditions. Recently, an engineer who went back from India to the UK helped the company learn about the air quality in Delhi to improve its existing air quality scale. "We're adding those extra levels so that our system will align with the air quality levels that India has," Bernard told Gadgets 360.

"We've got a lot of feedback from India which we'll be putting into our next-generation products... We'd like to learn from all of our markets, but India is quite an extreme example for us with those people who are very technology savvy and who want to very understand how things work and also combined them with some extreme cases," the executive continued.

"In India particularly, the air pollution is the highest in winters and at that time you don't use ceiling fans," said Bernard. "That was an insight for our POLAR test."

Unlike the traditional Clean Air Delivery Rate (CADR) that involves a fan to circulate the air in a compact chamber of 127 square feet along with only one sensor, Dyson engineers examine the performance of its air purifiers using the POLAR test. The proprietary test isn't just based on a bigger room size of 290 square feet but also requires no added fan and uses nine sensors — with eight in the corners and one in the centre of the room.

A sample showing how Dyson conducts its POLAR test

Aside from taking learnings from developing markets like India into consideration, Dyson carefully looks at the competitors while developing new models, Bernard admits.

"We understand the competitors," asserted Bernard. "We take their products home and then try them ourselves and put them into our test labs, and try and really understand them. When you start off with a problem — whether it's a heater, purifier, or it's a hairdryer, you want to understand what really frustrates people about using the product. That's what we do."

"We're not shy when we say our products are the best, but to know that, obviously, you have to know what else is out there," he added.

Plans to work with healthcare experts
Dyson last year partnered with FICCI Research and Analysis Centre (FRAC) to understand the issue of hidden dust in India. But that was just the beginning.

"We're looking to getting specifically more doctors and more healthcare Indian leaders to make sure that we understand about the health and how pollution affects people, and what's the best we can do towards that," Bernard told Gadgets 360. "So over the next few months, we're trying to work more specifically in India to bring that knowledge into Dyson."

The addition of doctors and healthcare experts would help Dyson design better products that will ultimately improve its market presence.

"The biggest barrier to sale in India is people not believing that air pollution is a problem," explained Bernard. "And if they do believe that, they don't believe that a purifier will work. Hence, we are bringing experts to make the people aware and try to show them the problems."

Bernard also highlighted that Dyson would leverage its technology scouting team to look for academic partners from India. "I think it's really important as what we care about is getting the best technology wherever it comes from," he added.

Dyson currently has its key R&D hubs in England, Singapore, and Malaysia, along with small facilities in Shanghai and the Philippines. However, Bernard revealed that the company is open to having R&D from other regions, including India. "As the market grows, we need skills as well that are very suited and then we'll certainly consider India," he concluded.

MWC 2019 Preview: What to Expect at the World's Top Mobile Fair