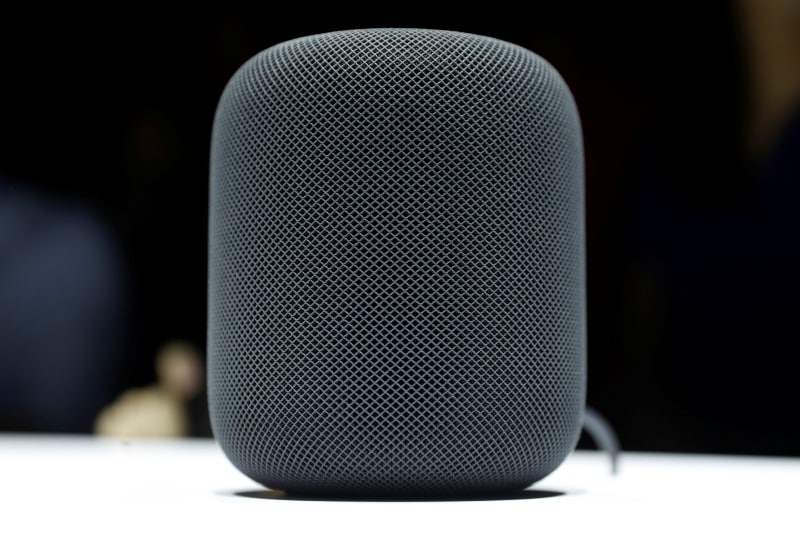 Apple is hoping a new smart home speaker will strike a chord with music lovers - the latest test of the iPhone maker's ability to redefine markets originally staked out by its rivals.

The trend-setting company also is putting new twists on existing products as it delves deeper into virtual reality and a form of artificial intelligence called machine learning.

The moves announced Monday escalate Apple's technological battle of wits with Google, Amazon, Microsoft and Facebook. These giants are battling over still-emerging fields that are expected to turn into technological gold mines, much the way personal computers and smartphones became moneymaking machines in previous decades.

No place like HomePod
The "HomePod" speaker unveiled at Apple's annual developers conference is similar to rival devices that have been released during the past two years.

Like the Amazon Echo and Google Home, the HomePod will play music while also helping people to manage their lives and homes. Siri, a digital assistant that has been on Apple's iPhone since 2011, will be voice activated to respond to requests for information and other help around the house.

Unlike those other smart speakers, Apple is positioning the HomePod primarily as a way to listen to and discover new songs and artists. Making the most of it will require a subscription to Apple's own music streaming service, which runs $10 to $15 (Rs. 120 in India) per month and has attracted 27 million subscribers so far.

The company is casting Siri as a music connoisseur that will learn and cater to the tastes of the HomePod's owners, as well as answer questions about the songs as they are played. "It will reinvent home audio," boasted Apple CEO Tim Cook.

The Echo, released in 2015, and Google Home, released last year, were the first entrants in a promising market. The research firm eMarketer says than 35 million people in the US are expected to use a voice-activated speaker at least once a month this year, more than double its estimate from last year.

Apple vs. the dry spell
The HomePod is Apple's first new gadget in nearly three years, following its announcement of the Apple Watch in September 2014. Although that product came out after other smartwatches hit the market, it quickly outshone competitors, according to industry research firms.

Still, the Apple Watch hasn't been a smash hit, fueling worries that the company's ability to transfix customers had waned after the 2011 death of co-founder Steve Jobs. During Jobs' last decade, Apple introduced the iPod, iPhone and iPad - all huge commercial successes that both reshaped daily life and swamped previous digital music players, smartphones and tablets.

Analysts said the smart home speaker market is ripe for Apple. The company "can't afford to yield valuable real-estate in the heart of people's homes to Amazon, Google and others," said Geoff Blaber, research analyst at CCS Insight. That's especially important because people are starting to access information, entertainment and search in a more "pervasive" way that's less dependent on smartphones, he said.

But it's also possible that the HomePod could expose Siri as less capable than Amazon's Alexa, Google's Assistant and Microsoft's Cortana, Blaber said. (Many reviewers have suggested that the current incarnation of Apple's assistant already trails competitors in key respects.) "This is the start of the AI wars," he said.

Macs, phone and payments
Apple had plenty of other announcements. New iMacs released Monday are getting better displays and graphics capabilities. Apple said that makes the Mac a great platform for developing virtual-reality "experiences," although the company didn't announce any consumer VR products.

Safari, Apple's web browser, is getting new features aimed at online annoyances. It will block videos that start playing automatically, for instance, and can also prevent ads from following and profiling users. It will not actually block ads, though.

Apple also introduced a new version of its business-oriented iPad Pro at an intermediate size with more storage, a better display and an improved camera. It's part of Apple's effort to entice professionals with tablets that can handle many tasks previously reserved for laptops.

New features coming to iPhones and iPads, meanwhile, include marginal improvements such as syncing messages to Apple servers in the cloud, saving storage space on phones and tablets. Apple also laid some groundwork for augmented reality, the projection of digital features onto real-world surroundings, by giving app developers tools for incorporating AR into their products.

Apple is also bringing the ability to send money to friends or other people through its payment service, Apple Pay. So far, the service has limited payments to purchases of products and services from companies and other organizations.