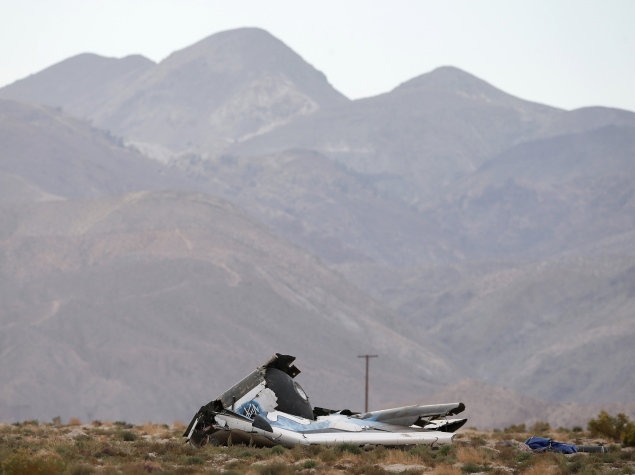 A passenger spaceship being developed by Richard Branson's Virgin Galactic company crashed during a test flight on Friday near the Mojave Air and Space Port in California, killing one pilot and seriously injuring the other, officials said.

The crash of the suborbital vehicle, undergoing its first powered test flight since January over the Mojave Desert, 95 miles (150 km) north of Los Angeles, came days after another private space company, Orbital Sciences Corp , lost a rocket in an explosion moments after liftoff in Virginia.

The back-to-back accidents dealt a blow to the fledgling commercial space launch industry, which has been taking on more work traditionally done by the US government while expanding for-profit space markets, including tourism.

Television footage of the Virgin Galactic crash site showed wreckage of the spacecraft lying in two large pieces on the ground, and the company said the spacecraft was destroyed. Kern County Sheriff Donny Youngblood said a debris field was spread over more than a mile.

One pilot was killed in the crash and his body was found in the wreckage, while the second pilot, who ejected and parachuted to the ground, survived with serious injuries, Youngblood said. The survivor was found more than a mile from the main wreckage, he said.

Both crew members were test pilots for Scaled Composites, the Northrop Grumman Corp subsidiary that designed and built the spacecraft for Virgin and lost three other employees in a July 2007 ground test accident.

Friday's crash occurred shortly after the craft, dubbed SpaceShipTwo, separated from the jet airplane that carried it aloft for its high-altitude launch, according to the Federal Aviation Administration.

Scaled Composites President Kevin Mickey told a news conference the ill-fated flight was the first using a new rocket fuel formula the company switched to in May. He said that formula "had been proven and tested on the ground" before Friday's test launch.

Stuart Witt, chief executive of the space port, recounted observing what appeared to be the plume from the initial firing of the spacecraft's rocket as it was released from the mothership, an indication that engine ignition had been achieved. But he said officials were not ready to speculate on the cause of the accident.

The National Transportation Safety Board said it was sending one of its "go-teams" to investigate.

Branson said via Twitter that he was on his way to Mojave following the crash. "Thoughts with all @virgingalactic & Scaled," he tweeted. George Whitesides, chief executive of Virgin Galactic, said he expected Branson to arrive on Saturday.

"Space is hard, and today was a tough day. We are going to be supporting the investigation as we figure out what happened today, and we're going to get through it," he told a news conference at the space port.

Paying customers must wait
More than 800 people have paid or put down deposits to eventually fly aboard the spaceship, which is hauled to an altitude of about 45,000 feet (13.7 kms) and released by Virgin's White Knight Two carrier jet airplane.

Cost of a ride on the ship now goes for $250,000 and among those who have signed up are celebrities including singer Lady Gaga and actors Angelina Jolie and Ashton Kutcher.

According to plans, the spaceship then fires its rocket motor to catapult it to about 62 miles (100 km) above Earth, giving passengers a view of the planet set against the blackness of space and a few minutes of weightlessness.

The vehicle is based on a prototype, SpaceShipOne, which 10 years ago won the $10 million Ansari X Prize for becoming the first privately developed manned spacecraft to fly in space.

"During the test, the vehicle suffered a serious anomaly resulting in the loss of SpaceShipTwo," Virgin said in a statement just after the crash.

Witt said the first sign of a malfunction came 90 seconds to two minutes after the carrier jet released the spacecraft, which occurred at 10:10 a.m. local time.

"There's usually a certain cadence, and you see things occurring, and the thing makes a contrail and the like. Because of the very light cirrus clouds, I was eyes on, but I didn't see any anomaly. In fact it was when I wasn't hearing anything that I became concerned. And I looked over at my colleague, and then there was a radio call, something about a chute."

The crash was the second accident this week involving a commercial U.S. space company. On Tuesday, an Antares rocket built and launched by Orbital Sciences exploded after liftoff from Wallops Island, Virginia, destroying a cargo ship bound for the International Space Station.

The launch, which was controlled from the Mojave Air and Space Port, was to have been the first in a series of test flights leading up to Virgin Galactic's maiden flight beyond Earth's atmosphere.

Virgin ultimately was planning to add four more suborbital spacecraft to its fleet, along with a second White Knight carrier jet. Plans call for the fleet to fly out of a new space port in Las Cruces, New Mexico, once the company completes all test flights and is certified for passenger service to begin.

Virgin Galactic's Whitesides told a Toronto space conference earlier this month that a second spacecraft was already under construction and about 60 percent complete.