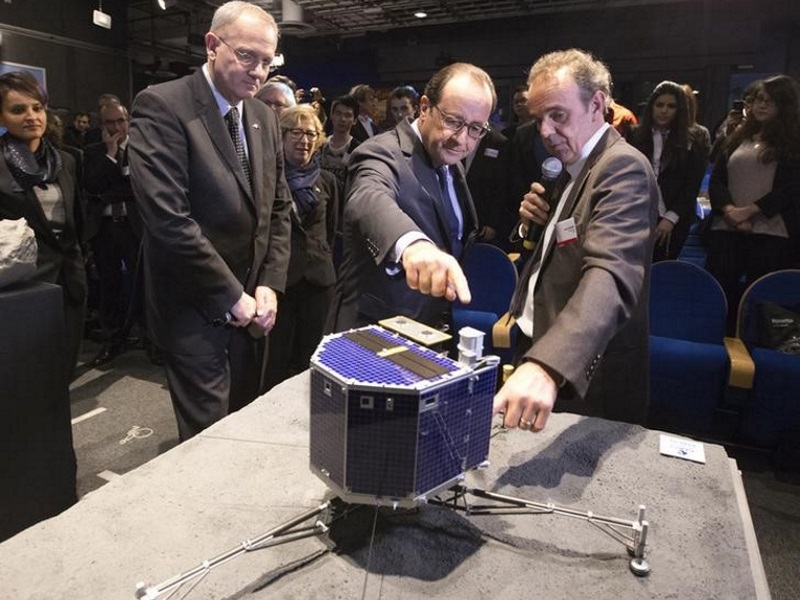 Scientists will send a few final prods to robot lab Philae, incommunicado on the surface of a comet hurtling through space, but hopes for a reply are running out, they said Tuesday.

A last-chance manoeuvre was attempted Sunday to shift the tiny lander into a sunnier angle for its battery-replenishing solar panels.

"We are going to send a few more" commands in the coming days, he added.

In a first for space exploration, Philae was dropped onto the surface of comet 67P/Churyumov-Gerasimenko on November 12, 2014 after a 10-year, 6.5-billion-kilometre (four-billion-mile) journey through space piggybacking on mothership Rosetta, which is now orbiting the comet.

The washing machine-sized probe survived a rough landing, bouncing several times off the craggy comet surface and ending up at an angle in a shaded crevice.

Philae sent home data from about 60 hours of comet sniffing and prodding with eight of its 10 instruments before going into standby mode on November 15, 2014.

The lander's power pack was recharged as 67P drew closer to the Sun on its elliptical orbit, and Philae woke up on June 13, to great excitement on Earth.

It made eight intermittent contacts via Rosetta, only to fall silent again on July 9.

On Sunday, ground controllers sent a command to try to get Philae to budge, hoping this would shake any dust off its panels and better align it with the Sun.

Odds getting worse
"We have not gotten any feedback on its success," the DLR said in a video uploaded to Twitter.

It was possible Philae had received and executed the command, but could not talk to Rosetta.

DLR said a camera on Rosetta took a sequence of images which are being scrutinised for any signs of a dust cloud that could have been caused by Philae shifting position.

Scientists plan to send more commands to the robot lab in the coming days.

If there is no response, the communications systems will be switched to "listening mode" on the off chance that Philae does get a signal out.

But the odds are getting "worse and worse" as the comet moves away from the Sun.

By the end of January, the comet will be some 300 million kilometres (185 million miles) from the Sun.

Once its surface temperature falls below minus 51 degrees Celsius (minus 60 degrees Fahrenheit), Philae will no longer be able to operate.

"If we have heard nothing by end-January, it will be over" for Philae, said Philippe Gaudon, Rosetta project manager at France's CNES space agency.

The ground-breaking mission was conceived to learn more about comets, and possibly the origins of life on Earth.

Comets are pristine leftovers from the Solar System's formation some 4.6 billion years ago. Many experts believe they smashed into our infant planet, providing it with water and the chemical building blocks for life.