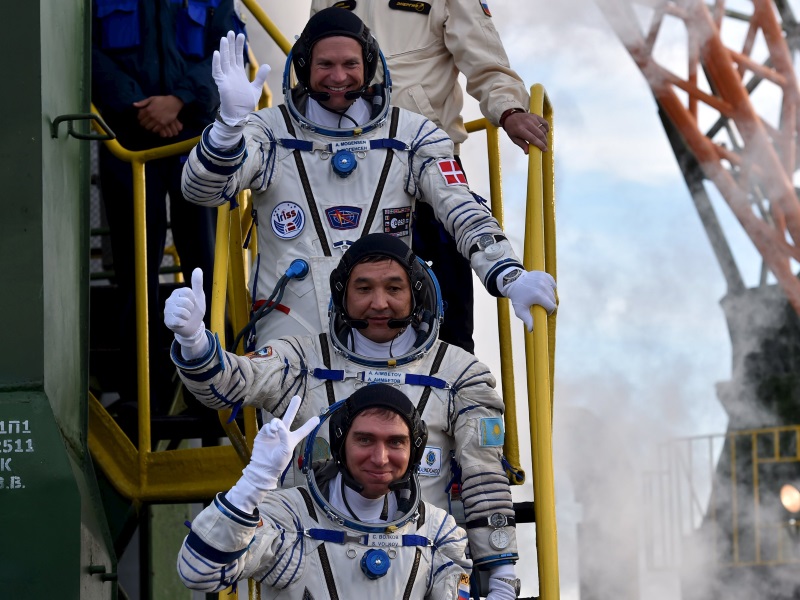 A Russian Soyuz spaceship safely delivered a three-man international crew, including Denmark's first astronaut, to the International Space Station (ISS) on Friday, a day after having had to manoeuvre to avoid colliding with space debris.

The Soyuz TMA-18M blasted off to the $100 billion space laboratory from the Baikonur Cosmodrome in Kazakhstan on Wednesday to take Russian Commander Sergei Volkov, Kazakh cosmonaut Aidyn Aimbetov and Danish astronaut Andreas Mogensen into orbit.

"The Soyuz has now successfully docked at the ISS," a Nasa TV presenter said after the spaceship reached the 15-nation orbiting outpost at about 1040 Moscow time (0740 GMT).

He and Aimbetov, Kazakhstan's third cosmonaut, are due to return to Earth on Sept. 12 together with veteran Russian cosmonaut Gennady Padalka, who has been working aboard the ISS since March. By then, Padalka will have racked up a total of 878 days in space, more than any other person.

Volkov will land next March together with Nasa astronaut Scott Kelly and Russian Mikhail Kornienko, who will have spent one year in space by that time.

This time it took two days to reach the ISS, rather than a six-hour approach usually taken in recent years. Russian space agency Roscosmos said last month the altitude of the ISS, lifted in July to avoid space debris, required the slower approach.

On Thursday, ballistics experts from Russia's Mission Control and U.S. space agency Nasa advised the Soyuz crew to make a manoeuvre in order to avoid a collision with a third stage of a Japanese rocket launched in 1989, Roscosmos said.