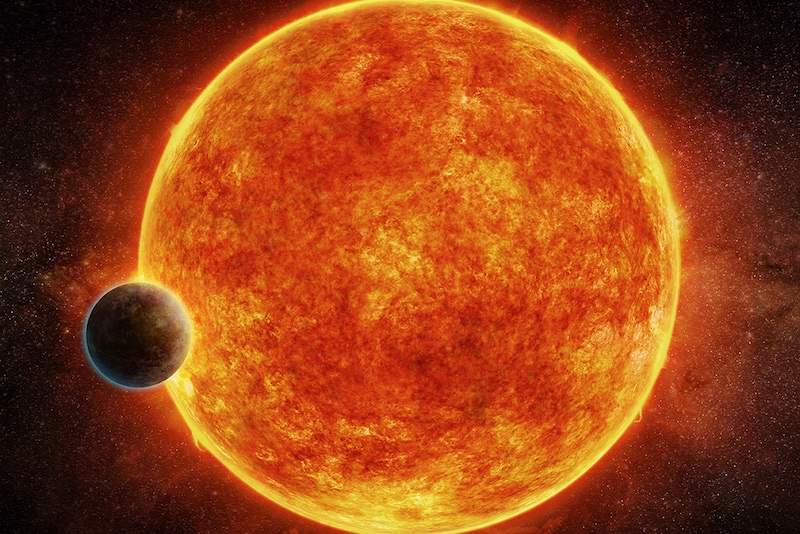 Astronomers on Wednesday announced the discovery of a "super-Earth" orbiting a nearby star which may offer the most promising target yet in the search for life beyond the Solar System.

Named LHS 1140b, the planet orbits a star 40 light years away, circling it in the coveted "Goldilocks" zone.

This is the distance from a star where the temperature is not too hot, nor too cold, but just right.

So if there is water, the stuff of life, it can exist encouragingly in liquid form and not as rock-solid ice or vapour.

Previous worlds in this temperate zone have already been spotted, notably a clutch unveiled just two months ago to great fanfare.

But LHS 1140b is exceptional because of its location. Astronomers have a relatively grandstand view of it, and already some beguiling things are known.

One way to hunt exoplanets, a field launched a quarter of a century ago, is to analyse tiny dips in starlight that occur when a planet transits in front of its star.

From these minute changes, useful but sketchy details can be gleaned about the passing object.

In the case of LHS 1140b, the starlight is bright, the orbit is only 25 days and the planet is seen almost edge-on from Earth.

As a result, astronomers have been able to get close, frequent looks at the all-important light signature - a big plus in the drive to figure out a planet's size, mass and possible atmosphere.

"This is the most exciting exoplanet I've seen in decades," said Jason Dittmann of the Harvard Smithsonian Center for Astrophysics, who led the team.

"We could hardly hope for a better target to perform one of the biggest quests in science -- searching for evidence of life beyond Earth."

Planet of the Sea Monster
LHS 1140b, whose discovery is published in the journal Nature, orbits a so-called red dwarf star called LHS 1140 in the constellation of Cetus, the Sea Monster.

The planet's orbit is 10 times closer to its star than the Earth is to the Sun, according to early measurements.

In our Solar System, such a planet would be so scorched that any atmosphere and surface water would be stripped away.

But red dwarves are much smaller and cooler than our Sun - LHS 1140b receives only half as much sunlight as we do.

Early measurements suggest it is about five billion years old, or about 500 million years more than the Earth, and has a diameter about 1.4 times the size of our planet.

However, its mass is around seven times bigger than Earth's, which means it is dense.

Rather than being a planet made of gas, it is thus probably rocky with a dense iron core, and the neighbouring "red dwarf" seems benign and stable. Both are ticks in the theoretical boxes for habitable worlds.

A Harvard team was first to spot the telltale dips in light from the star. HARPS, a powerful European telescope in Silla, Chile, was then trained on the find to make the crucial followup observations.

On February 22, other researchers said they had discovered seven planets, similar in size and mass to Earth, near an "ultracool" red dwarf called Trappist-1, 39 light years from Earth.

All seven of Trappist-1's planets are considered potential candidates for having water in some form, but the chances are highest for three located in the Goldilocks zone.

Xavier Bonfils, an astronomer at the Observatory of the Sciences of the Universe in Grenoble, France, said LHS 1140b now "joins Trappist-1 at the head of the rankings."

"We are very excited by this discovery. It's a super opportunity," he told AFP.

Atmospheric clues?
The next step will be to see if the planet has an atmosphere - a goal that should be hugely helped by the James Webb orbital telescope, due to be launched in October 2018 as a successor to the fabled Hubble.

But it could take several more years to know the atmosphere's chemical composition, which will be sifted for clues of life, or the potential for it.

According to the NASA Exoplanet Archive, the tally of confirmed exoplanets stands at 3,475.

Only a handful have a mass similar to that of Earth and orbit the temperate zone.

However, the shortlist is beginning to show intriguing variety, said Bonfils.

"We are multiplying opportunities for looking for the place where life may have emerged elsewhere in the Universe," he said.