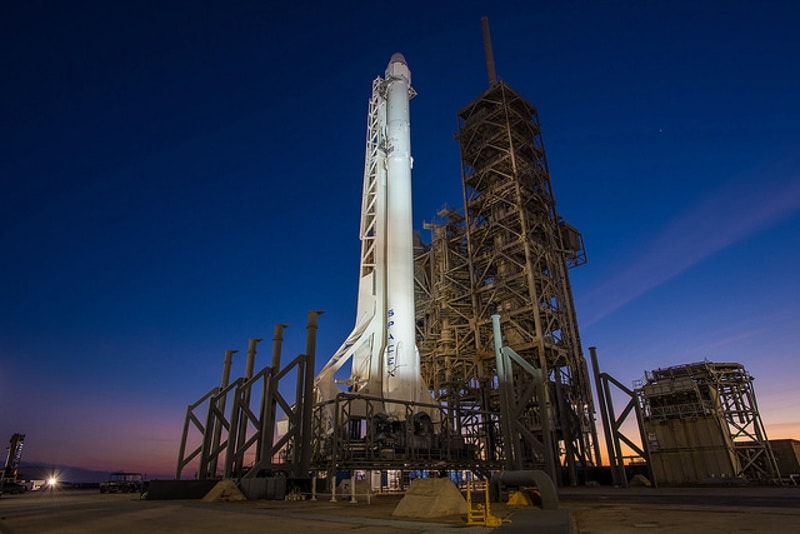 An unmanned SpaceX spaceship carrying food and equipment to the astronauts living at the International Space Station is poised to blast off from a historic NASA launch pad on Saturday.

The launch of the Dragon cargo ship is scheduled for 10:01 am (3:01pm GMT) from Cape Canaveral's launchpad 39A, which was built and used for the US space agency's pioneering missions to the Moon in the 1960s and 1970s.

It was also the blastoff point for sending American space shuttles into orbit, until the shuttle program came to an end in 2011.

SpaceX, headed by billionaire Internet entrepreneur Elon Musk, managed to negotiate a lease with NASA for the launchpad in 2013, beating out its competitor Blue Origin, which is headed by Amazon.com founder Jeff Bezos.

By the time the launch pad is completely outfitted for sending astronauts to space in 2018, the company will have spent over $100 million to outfit it for modern day spaceflights, said SpaceX chief operating officer Gwynne Shotwell.

"I wouldn't say we saved a bunch of money here," she told reporters, but added that the launchpad's singular place in American space lore made the price tag worthwhile.

"My heart is pounding to come out here today," she told an outdoor press conference near the launchpad, recalling how she watched the Apollo 11 mission's July 1969 lunar landing on television with her father as a child.

"I can tell you it is an extra special launch tomorrow, for sure. Maybe extra nerve-wracking," she added.

Helium leak
SpaceX has endured two costly disasters in the past two years - a launchpad blast that destroyed a rocket and its satellite payload in September, and a June 2015 explosion after liftoff that obliterated a Dragon cargo ship packed with goods bound for the space station.

The Hawthorne, California-based company has already made one successful return to flight in January of this year, from Vandenberg Air Force base in California.

Saturday's planned launch was left somewhat in question, after SpaceX discovered a "very small" leak in the second stage of the Falcon 9 rocket on Friday, Musk tweeted.

"I believe we found it," Shotwell said, adding the problem involved a helium leak and that engineers were still working to figure out the root cause.

"As far as I know right now, we are going to proceed with the count."

If Saturday's launch - meant to carry 5,000 pounds (2,267 kilograms) of gear into orbit - is delayed, another opportunity opens up Sunday morning.

Landing attempt
Following the launch, SpaceX plans to try landing the booster on solid ground at a different part of Cape Canaveral.

If successful, the upright touchdown of the Falcon 9's first stage would mark the third time SpaceX has managed to stick a landing on solid ground.

Other such landings have taken place on floating ocean platforms, as the company perfects its techniques of powering costly rocket parts back to land instead of jettisoning them in the ocean after a single use.

The Dragon will spend two days in orbit before arriving at the space station early Monday.

The cargo resupply mission, known as CRS-10, is the 10th of up to 20 planned trips to the space station as part of a contract between SpaceX and NASA.