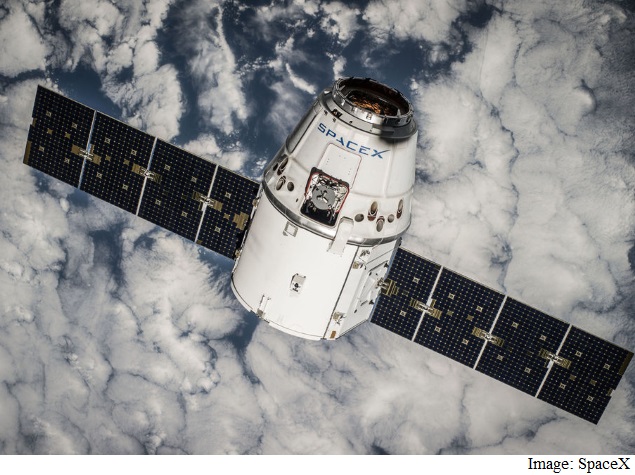 SpaceX's unmanned Dragon cargo ship arrived Monday at the International Space Station, carrying 2.6 tons of food and supplies for the astronauts at the orbiting research laboratory.

"We have captured Dragon," Nasa commentator Rob Navias said as the space station's robotic arm, operated by commander Barry "Butch" Wilmore, grappled the spacecraft at 10:54am GMT, according to Nasa's television broadcast.

Wilmore was assisted by European Space Agency flight engineer Samantha Cristoforetti as they used the station's 17.6-metre (57.7-foot) robotic arm to reach out and capture the Dragon spacecraft.

The rendezvous was "flawless," Navias said.

About two hours after grapple, Dragon will be bolted onto the station's Earth-facing Harmony node.

The cargo ship launched atop a Falcon 9 rocket from Cape Canaveral, Florida on Saturday. It marked the fifth of at least 12 planned official missions for SpaceX which has a $1.6 billion (roughly Rs. 9,940 crores) contract with Nasa to supply the space station.

The equipment on board includes a Nasa-developed system for measuring tiny particles called aerosols in the atmosphere, known as the Cloud-Aerosol Transport System (CATS).

An IMAX camera and tools to help astronauts during spacewalks are also in the payload.

The arrival was about 18 minutes ahead of schedule, Nasa said.

Astronauts may begin unloading the spacecraft as early as Monday afternoon.

Dragon will spend about a month there before returning to Earth with over 3,600 pounds (1,600 kilograms) of cargo that is no longer needed by the crew in space, as well as computer equipment and science experiments that need further analysis on Earth.

The spaceship is the only cargo vessel in the world that can return to Earth intact. Other supply ships burn up on re-entry to Earth's atmosphere.

It will head back to Earth for an ocean splashdown on February 10, Nasa said.