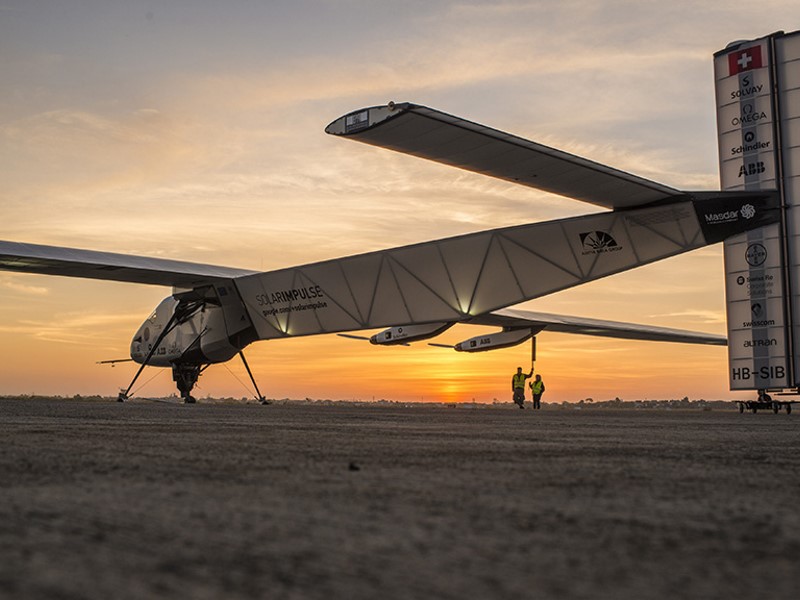 The Solar Impulse 2 resumed its record-breaking quest Thursday to circle the globe without consuming a drop of fuel, taking advantage of improved weather to take off from Hawaii.

"C'est beau! We are in the air," the 58-year-old pilot, a medical doctor by profession, said as the aircraft left the runway.

He took to Twitter within moments to share his thoughts on the mission, posting: "Take-off is the most exciting moment but also the moment where all the unknown still lies ahead."

The SI2 was grounded in July last year when its batteries suffered problems halfway through its 21,700-mile (35,000-kilometre) circumnavigation.

The crew took several months to repair the damage from high tropical temperatures during the flight's final Pacific stage, a 4,000-mile flight between Nagoya, Japan and Hawaii.

The aircraft was flown on that stage by Piccard's teammate Andre Borschberg, whose 118-hour journey smashed the previous record of 76 hours and 45 minutes set by US adventurer Steve Fossett in 2006.

It conducted its first successful test flight following repairs in late February, with the current leg expected to take 59 hours.

To the limit
Piccard, who has been alternating the long solo flights with Borschberg, will fly more than 2,300 miles from Hawaii to Mountain View, 40 miles southeast of San Fransisco, California, on the ninth of 13 legs.

"It's an incredible feeling. We thought it might be delayed again. We had the experience last year that a lot of take-offs were postponed but this is great," said Prince Albert of Monaco, a patron of the project, in images fed from its headquarters in the principality.

Borschberg, 63, took catnaps of only 20 minutes at a time to maintain control of the pioneering plane during the flight from Japan, in what his team described as "difficult" conditions.

Traveling at altitudes of more than 9,000 metres (29,500 feet), Borschberg at times had to use oxygen tanks to breathe and experienced huge swings in temperature throughout.

Alone throughout and utterly self-reliant in the unpressurized cockpit, Borschberg was equipped with a parachute and life raft, in case he needed to ditch in the Pacific.

Mission organizers described the journey as having taken "pilot and aircraft to the limits" of their endurance.

The aircraft began its mission from the United Arab Emirates (UAE) last year powered by 17,000 solar cells, with the project aimed at promoting the use of renewable energy.

No stranger to adventure
Its wingspan is longer than a jumbo jet but its weight is roughly the same as a car thanks to its light construction.

Borschberg, born in Zurich, is no stranger to adventure - 15 years ago, he narrowly escaped an avalanche, and then in 2013 he was involved in a helicopter crash that left him with minor injuries.

In 2010, for the first time in history, he flew 26 hours straight using only solar energy.

"Last year we demonstrated that Solar Impulse is capable of flying five days and five nights non-stop: the airplane, the technologies, the human being," he said in a statement after Thursday's take-off.

"Now what we want to do is continue our flight around the world and demonstrate that these technologies can be used, not only in an airplane, but on the ground."

The plane is expected to cross the United States, stopping in New York before a trans-Atlantic flight to Europe, from where the pilots plan to make their way back to the point of departure in Abu Dhabi.

The battery damage was the latest in a series of hitches.

Borschberg experienced a problem with one of his eyes, which forced him to cut short his flight over Asia and return to Switzerland for several days.

The plane was also not supposed to land in Japan, but bad weather en route from Nanjing in China to Hawaii forced a detour at the start of June.