A solar-powered aircraft flying between Japan and Hawaii as part of a round-the-world bid passed the halfway point of the perilous Pacific Ocean crossing Wednesday, and smashed its own endurance record.

By that time, the plane and its veteran Swiss pilot Andre Borschberg had logged 56 hours of continuous flight easily bettering the previous record of 44 hours they had set between China and Japan.

"Already halfway through what is probably the flight of my life! Loving it!," Borschberg tweeted from the cockpit.

The eighth leg of the global circumnavigation was expected to take five days and five nights, and was billed as the most difficult part of the adventure.

The experimental solar-powered aircraft left Japan around 6pm GMT (11:30pm IST) Sunday the early hours of Monday local time after spending a month in the central city of Nagoya. 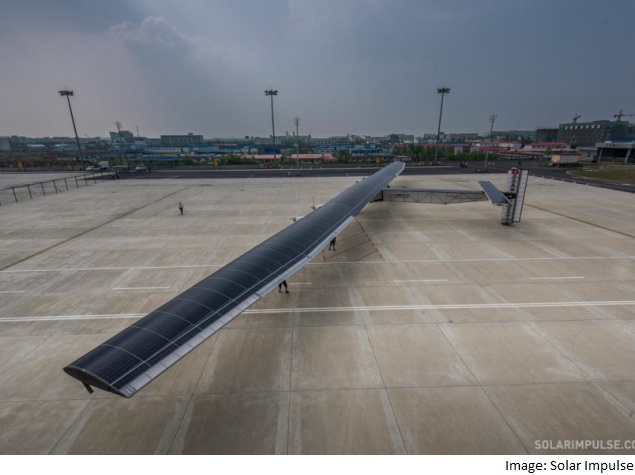 The propeller-driven plane was originally scheduled to fly directly from Nanjing in China to Hawaii, but bad weather along the way forced a diversion to Japan that extended for almost the whole of June as forecasters waited for better conditions.

Borschberg is alone and entirely self-reliant in the 3.8-cubic-metre (134-cubic-foot) unpressurised cockpit.

Travelling at altitudes of more than 9,000 metres (29,500 feet), he has to use oxygen tanks to breathe and experiences huge swings in temperature throughout the day.

He rests for only 20 minutes at a time and cannot move from his seat, which has a built-in toilet, as well as a parachute and a life raft attached.

Solar Impulse 2 set off from Abu Dhabi earlier this year in a multi-leg attempt to fly around the world without a single drop of fuel.

It has 17,000 solar cells and on-board rechargeable lithium batteries, allowing it to fly through the night.

Its wingspan is longer than that of a jumbo jet but it weighs only 2.3 tonnes about the same as a car.

Facebook CEO Details Upcoming Features, AI and VR Research in Q&A Session
Chat With Over 80,000 Doctors and Get a Second Opinion at Home With Lybrate