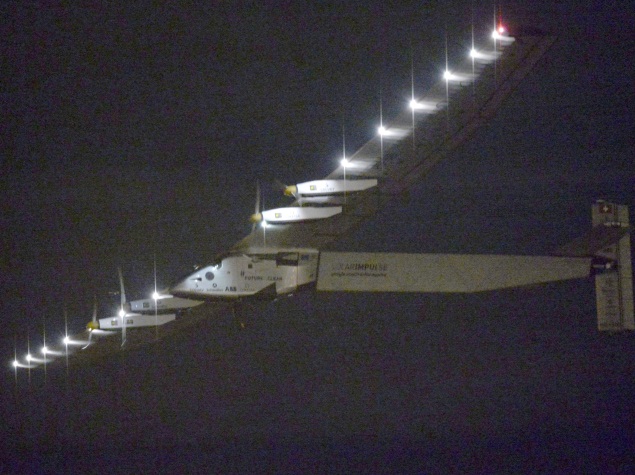 The revolutionary Solar Impulse 2 aircraft passed "the point of no return" Monday after it left Japan bound for Hawaii, the most ambitious leg of its quest to circumnavigate the globe powered only by the sun.

"No Way Back! This is a one way ticket to Hawaii," tweeted @solarimpulse. "André Borschberg has passed the point of no return and must now see this 5 days 5 nights flight through to the end."

Japan's transport ministry said that according to the flight plan submitted by the team, Solar Impulse was to "fly south first and then east before going up north while avoiding clouds" over the Pacific.

"Since it is flying very slowly, something like 70 kilometres (43 miles) per hour, we are not sure how far it can go (in a given time)," a ministry official told AFP.

"But because of subtropical westerlies, we think it unlikely that the airplane will come back to Nagoya."

The journey to Hawaii is 7,900 kilometres and is expected to last at least five days and five nights.

It is the eighth leg of the circumnavigation, and with nowhere to land after leaving Japan, is considered the riskiest so far.

Borschberg has said he will keep in shape during his long solo flight by doing yoga, and will sleep 20 minutes at a time, normally at night.

But he has also previously admitted that being cooped up in the 3.8-cubic-metre (130-cubic-foot) cockpit for long stretches of time is a challenge.

Weather window
Solar Impulse 2 set off from Abu Dhabi earlier this year in a multi-leg attempt to get all the way around the world without a single drop of fuel.

The featherweight flying machine was not supposed to land in Japan, but bad weather en route from Nanjing in China to Hawaii forced a diversion at the start of June.

The plane has since been stranded in Japan for nearly a month, with the crew scouring long-range forecasts for a favourable weather window.

A chance to restart the record-breaking journey presented itself last week, with the plane due to leave Nagoya early Wednesday, but mission chiefs pulled the plug at the 11th hour due to bad weather over the Pacific Ocean.

Neumann said the weather looked good for now but could still change.

In an interview published Thursday, one of the plane's two pilots, Bertrand Piccard, said it must cross the Pacific within a few weeks or it could remain stuck in Japan for a year.

By early August, the days will become too short for the solar-driven plane to cross the Pacific, and subsequently the Atlantic Ocean safely, he told the Tribune de Geneve daily.

Solar Impulse 2 has 17,000 solar cells and on-board rechargeable batteries. Its top speed is 140 kilometres an hour.

Its wingspan is longer than that of a jumbo jet, but it weighs only 2.3 tonnes about the same as a car.

The plane is the successor to Solar Impulse, which managed a 26-hour flight in 2010, proving its ability to store enough power in lithium batteries during the day to keep flying at night.

Ridiculed by the aviation industry when it was first unveiled, the venture has since been hailed around the world, including by UN chief Ban Ki-moon.

OnePlus 2 Leaked in Multiple Images, Metal Frame Tipped
Amazon to Offer Loans to Sellers in India and 7 Other Countries