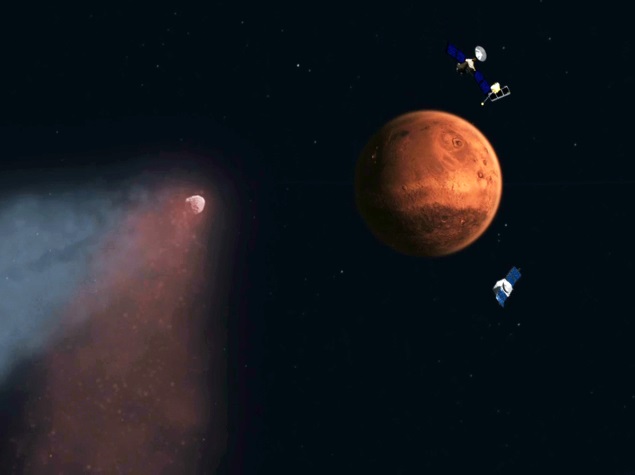 A pristine distant comet created a once-in-8-million-year fireworks show above Mars last month. But no one got to see it live.

New Nasa data from satellites circling Mars shows that when the comet named Siding Spring skimmed the red planet, tons of comet dust bombarded the Martian sky with thousands of fireballs an hour. It warped the Martian atmosphere leaving all sorts of metals and an eerie yellow afterglow on Oct. 19.

A meteor shower from magnesium, sodium, iron and five other metals may have been so heavy that it might be even considered a meteor storm, said University of Colorado scientist Nick Schneider. Spikes in magnesium physically changed the atmosphere around Mars, while sodium left a yellowish glow in the sky after the meteor showers finished, he said.

The best view would have been from the Martian surface, where Nasa had the rovers Opportunity and Curiosity looking up. But the rovers could only take stills, said agency chief planetary scientist Jim Green. There was no video to capture the shooting stars that made it a spectacular light show.

Instead, Nasa's satellites recorded lots of scientific data, which allowed astronomers to describe what it must have been like.

It was not only big, but the dust assault was far larger than Nasa anticipated, Green said. Nasa's models estimated that the dust would not be enough to harm the satellites around Mars, but the agency moved them to the other side of the planet just in case. That turned out to be wise, he said.

The comet came from the Oort Cloud, which is at the very edge of our solar system. Comets from there are rare so this was the type of event that happens once every 8 million years. And when they come toward the sun they aren't as dusty as others, more pristine, astronomers said.

"We never before had the opportunity to observe an Oort Cloud comet up close," Green said. "Instead of going to the comet, it came to us."