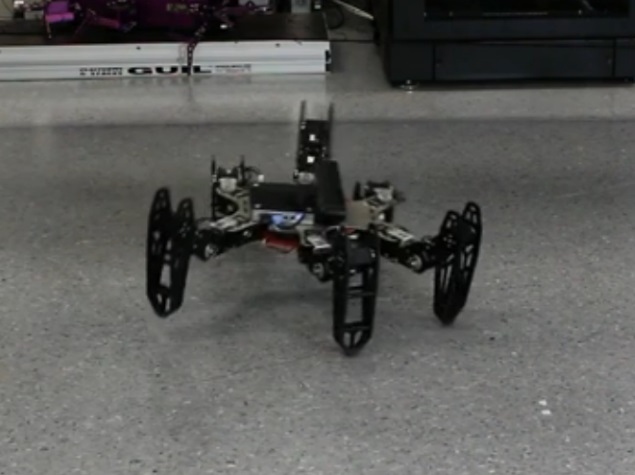 Scientists on Wednesday said they had created a small robot that can recover from damage, in a step towards machines that mimic the remarkable adaptive powers of humans and animals.

The feat could one day lead to first-responder robots which can cope with dangers that today would put them out of operation, they said.

"The idea is to have robots that can survive in hostile environments such as a Fukushima-type nuclear disaster," said Jean-Baptiste Mouret of the Pierre and Marie Curie University in Paris.

"If we send in robots, they have to be able to pursue their mission even if they are damaged, and not just come to a halt in the middle of a reactor," he told AFP.

The research, published in the journal Nature, is inspired by the learning abilities of the natural world.

If a dog hurts its paw, for instance, it will seek to move differently to avoid putting pressure on the painful wound.

The adaptive skill comes from experience from knowing how the body moves and exploring the options that are available.

This is what Mouret's team sought to replicate in a powerful computer programme to guide a six-legged 50-centimetre (20-inch) walking robot.

The core of the programme is to build a knowledge base for the robot of how it moves, and to assign to each of these movements a "value" as to how useful they could be in a crisis.

In the case of the injured dog, the animal knows that to walk again, it has to learn how to shift its weight around. Behaviours such as sniffing or wagging its tail are rejected at this time because they will not help.

The "values" are then used to guide a learning algorithm, called Intelligent Trial and Error, that conducts experiments to see if compensatory behaviour will help the robot to continue its mission even when damaged.

Using it, the prototype robot found a way to keep walking after just a couple of minutes, even when two of its legs had been broken.

"If one behaviour doesn't work, the robot is smart enough to rule out that entire type of behaviour and try a new type," said Mouret's colleague, Antoine Cully.

"What's surprising is how quickly it can learn a new way to walk. It's amazing to watch a robot go from crippled and flailing around to efficiently limping away in about two minutes."

The team also used the programme on a flexible robotic arm which was tasked with dropping a ball into a bin.

The limb swiftly learned ways of carrying on with its mission, even when several of its "joints" were broken.