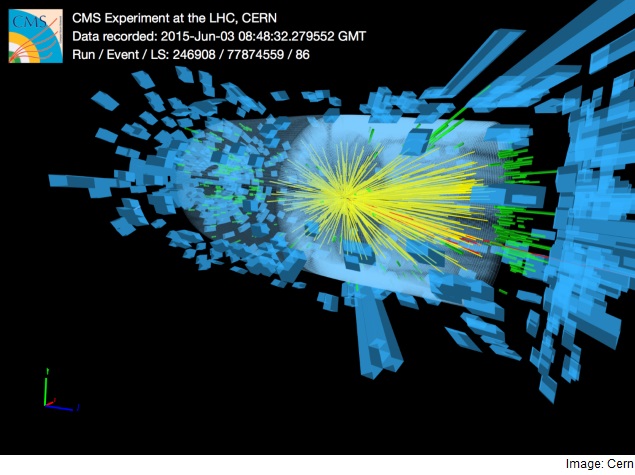 The world's biggest particle smasher started experiments with nearly doubled energy levels Wednesday, with scientists hailing a "new era" in their bid to unlock more mysteries of the universe.

The tests with collisions of 13 teraelectonvolts (TeV) came after a sweeping two-year revamp of the Large Hadron Collider (LHC), used to prove the existence of the Higgs Boson which confers mass and is also known as the God particle.

The European Organisation for Nuclear Research (Cern) said everything went according to plan at the giant lab, a 27-kilometre (17-mile) ring-shaped tunnel straddling the French-Swiss border.

"We have seen the first data beginning to flow. Let's see what they will reveal to us about how our universe works," he said.

"It's not going to happen tomorrow, be patient," he said.

"I am happy, I am touched, I am proud to be the boss of this organisation," he added, as the collision drew sustained applause from scientists monitoring the event.

On May 20, the LHC broke the record for energy levels colliding protons at 13 TeV for the first time.

The LHC's previous highest energy for collisions was eight TeV, reached in 2012 before it closed for a thorough upgrade.

Experiments at the collider are aimed at unlocking clues as to how the universe came into existence by studying fundamental particles, the building blocks of all matter, and the forces that control them.

Unlocking nature's secrets
"The collisions we are seeing today indicate that the work we have done in the past two years to prepare and improve our detector has been successful and marks the beginning of a new era of exploration of the secrets of nature," said Tiziano Camporesi, a spokesman for the project.

The LHC allows beams containing billions of protons travelling at 99.9 percent the speed of light to shoot through the massive collider in opposite directions.

Powerful magnets bend the beams so that they collide at points around the track where four laboratories have batteries of sensors to monitor the smashups.

The sub-atomic rubble is then scrutinised for novel particles and the forces that hold them together.

One teraelectronvolt is roughly equivalent to the energy of motion of a flying mosquito, Cern says on its website.

But within the LHC, the energy is squeezed into an extremely small space about a million, million times smaller than a mosquito. It is this intensity which causes the particles to be smashed apart.

During the next phase of the LHC programme, researchers will probe a conceptual frontier called new physics, including antimatter and dark matter.

The latter is a theoretical type of matter that cannot be seen with telescopes but is thought to make up most of the universe. It has only been detected by its gravitational effects, Cern says.

Ordinary, visible matter comprises only about four percent of the known universe.