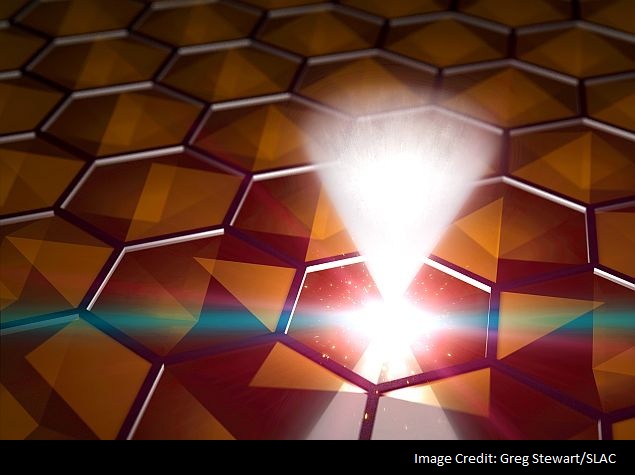 Scientists have found a material that has the same extraordinary electronic properties as 2D graphene but in a sturdy 3D form, a discovery that may lead

to new and faster types of electronic devices.

The material, cadmium arsenide, is being explored independently by three groups, one of which includes researchers at the University of Oxford, SLAC National Accelerator Laboratory, Stanford and Lawrence Berkeley National Laboratory.

Led by Yulin Chen of the University of Oxford, the group's work builds on its earlier studies of a sodium bismuth compound that also mimics graphene but turns to powder when exposed to air.

Co-authors Zhong Fang and Xi Dai, theoretical physicists from the Chinese Academy of Sciences, had predicted both compounds and suggested that cadmium arsenide, which is used in detectors and sensors, would provide the same properties in a much more stable form.

Their prediction proved correct, said Zhongkai Liu, the paper's first author and a graduate student at SIMES, the Stanford Institute for Materials and Energy Sciences at SLAC.

"The environmental stability of cadmium arsenide allows us to explore it very systematically, and makes it easier to study," he said.

Researchers are searching for graphene-like materials that are three-dimensional, and thus much easier to craft into practical devices.

Chen's group made samples of cadmium arsenide at Oxford and tested them at the Diamond Light Source in the UK and at Berkeley Lab's Advanced Light Source.

"We think this family of materials can be a good candidate for everyday use and we're working with theorists to see if there are even better materials out there," Chen said.

The research was published in the journal Nature Materials.