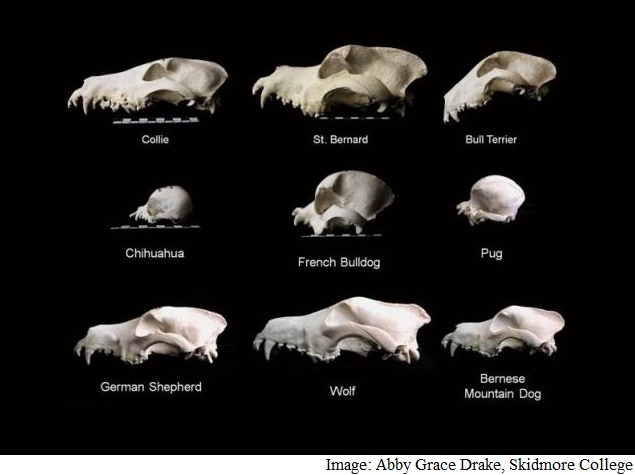 Man's best friend has not been around for nearly as long as thought, according to a study Thursday that brings the emergence of modern dogs forward by some 15,000 years.

The finding follows the reclassification of two fossil skulls, one more than 30,000 years old, that were the basis for dating dog domestication to a long-gone era when early humans were still roaming hunter-gatherers.

New 3D analysis of the skulls showed they were in fact those of wolves - not the earliest dogs as postulated in other studies, a research team wrote in the Nature journal Scientific Reports.

This means that the earliest fossil evidence for domesticated dogs still dates to about 15,000 years ago - a time when humans started forming permanent settlements and farming, said the team.

"Scientists have been eager to put a collar on the earliest domesticated dog," said biologist and study co-author Abby Drake of Skidmore College, New York.

"Unfortunately, their analyses weren't sensitive enough to accurately determine the identity of these fossils."

Drake and a team used scans and 3D visualisation software to study the shape and size of the two skulls and compare the data with measurements from the skulls of other dogs and wolves - both modern-day and ancient.

The same technology had previously been used to study human fossils, but never to identify members of the canid family, Drake told AFP.

It allowed the team to identify subtle morphological differences between dogs and wolves, such as the direction of the eye cavity and the angle between the muzzle and forehead.

"Our study provides a new and more accurate method for determining if a fossil is a wolf or a dog," Drake said, adding the findings demonstrated that other measurements used until now "are extremely inaccurate".

"We were able to determine if a skull was from a dog or wolf with 96 percent accuracy," she said.

It was a relatively short time ago, 200 years or so, that the first breeds were named and breed standards introduced, said Drake. Since then, "we have seen an explosion in dog diversity."

The dog was likely the first animal to be domesticated by Man - a key step in the development of modern human civilisation.

"People are inherently interested in dogs and we have influenced their evolution," Drake said of the motivation for the research.

"They are such a part of our lives. Knowing when domestication of dogs took place in the course of human history is important to our story and theirs."