Russian Spacecraft With US Grandpa Onboard Docks at Space Station 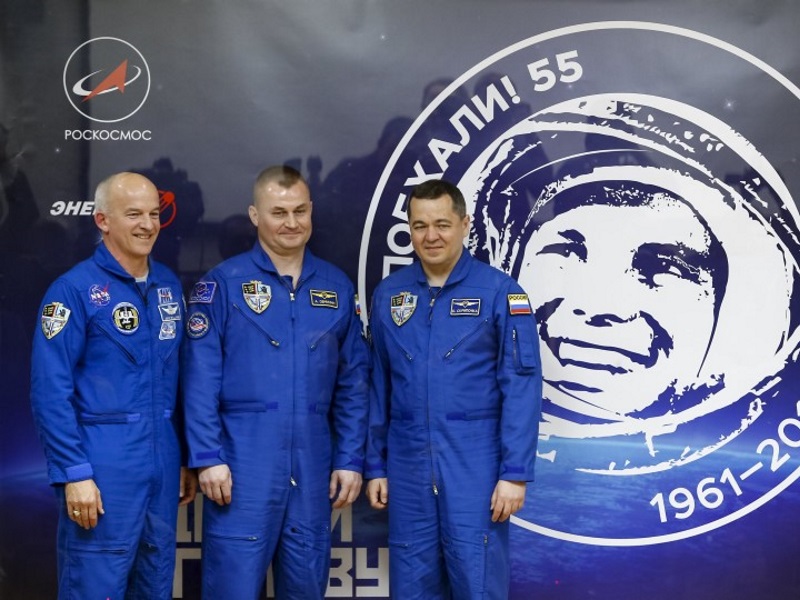 A Russian spacecraft carrying three crew to the International Space Station, including a US grandfather who is poised to enter the record books, has successfully docked with the orbital outpost, Nasa said.

The crew docked at 0309 GMT Saturday some 407 kilometers (253 miles) above the Pacific Ocean, off the western coast of Peru, according to the American space agency.

The rocket took off in windy conditions from Russia's space base in Kazakhstan at 2126 GMT, an AFP reporter saw.

According to Nasa, it orbited the earth four times in its approximately six-hour journey.

The trio on board comprise Russians Oleg Skriprochka and Alexey Ovchinin, and US grandfather of three, Jeff Williams, a veteran of long-duration space missions.

The craft is decorated with a portrait of the first man in space, Soviet hero Yuri Gagarin, whose pioneering orbital flight was made nearly 55 years ago, on April 12 1961.

By the end of his half-year trip aboard the ISS, Williams "will become the American with the most cumulative days in space 534," Nasa says.

The previous US record was set by astronaut Scott Kelly earlier this year.

Kelly, 52, spent nearly a year in space and returned to Earth earlier this month with a total of 520 days in space, as part of an experiment to test the effects of long-duration spaceflight on the body and mind ahead of a potential future mission to Mars.

The all-time record for cumulative days spent in space is held by Russian cosmonaut Gennady Padalka, who racked up 879 days over his career and wrapped up his final mission in September 2015.

Williams has so far notched up over 362 days in space, including three spacewalks.

His previous missions were flown aboard the space shuttle Atlantis in 2000, as well as a trip in 2006 when the station was far smaller with only two modules and three crew members.

In 2009 and 2010, Williams served as a flight engineer for three months and later commanded the ISS for the remainder of his half-year mission.

The ISS has been orbiting the Earth at roughly 28,000 kilometres (17,400 miles) per hour since 1998 and has been continuously occupied since the first expedition in November 2000.

Space is one of few areas of cooperation between Moscow and the West that has not been disrupted by tensions connected to violence and separatism in Ukraine.