Europe's pioneering Rosetta spacecraft concluded a 12-year odyssey with a controlled crash-landing Friday onto the comet it has orbited and probed for two years to unravel the secrets of the Solar System's birth, mission controllers said.

"I can confirm the full success of the descent of Rosetta," Mission Manager Patrick Martin announced to wild cheering in the control centre, based in Darmstadt near Frankfurt in Western Germany.

"Rock-n-roll Rosetta," added a visibly moved Matt Taylor, the mission's project scientist, as he stepped from the podium, holding - and shaking - his head.

(Also see: Rosetta: The End of a Space Odyssey)

In the hours before the crash-landing, Rosetta gathered crucial last-gasp data from nearer the galactic wanderer than ever before, its instruments primed to sniff the comet's gassy halo, measure temperature and gravity, and take close-up pictures of the spot that is now its icy tomb.

The craft had been programmed for a "controlled impact", at a human walking pace of about 90 cm (35 inches) per second, after a 14-hour freefall from an altitude of 19 kilometres (12 miles).

Confirmation of the mission's end came at 1119 GMT (4:49pm IST), when the spacecraft's signal - with a 40-minute delay - faded from ground controllers' computer screens.

The trailblazing craft's final manoeuvre was executed at a distance of 720 million kilometres (450 million miles) from Earth, with the comet zipping through space at a speed of over 14 kilometres (nine miles) per second. 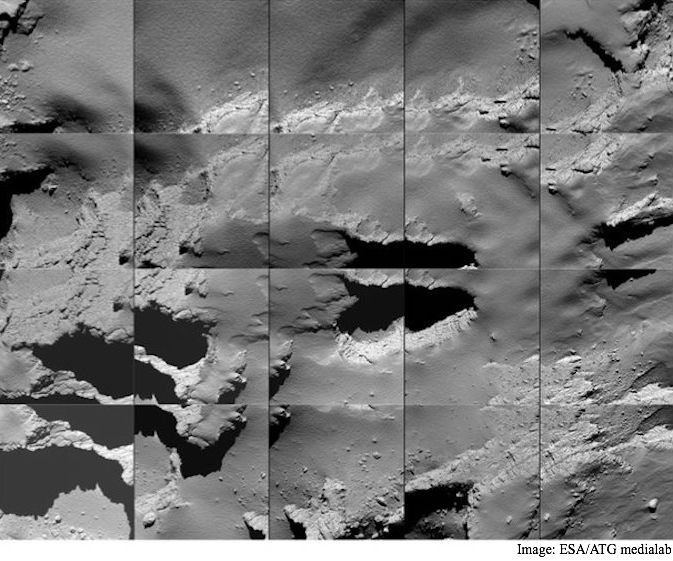 Mission scientists expected it would bounce and tumble about before settling -- but Rosetta's exact fate will never be known as it was instructed to switch off on first impact.

The comet chaser was never designed to land.

The first-ever mission to orbit and land on a comet was approved in 1993 to explore the birth of our Solar System 4.6 billion years ago.

Philae was released onto the comet surface in November of that year, bouncing several times, then gathering 60 hours of on-site data which it sent home before entering standby mode.

Having made the closest approach on its 6.6-year loop around the Sun in August last year, the comet is now moving further and further away from our planetary system's central star, which means Rosetta's solar panels are catching fewer battery-replenishing rays.

Rather than just letting it fade away, scientists opted to end the mission on a high by taking measurements from up close -- too close to risk under usual operating conditions.

Bittersweet
On Thursday night, Rosetta was commanded to exit comet orbit and join long-spent Philae on 67P for a never-ending journey around the Sun.

Flight operations director Andrea Accomazzo, working on Rosetta for nearly 20 years, confessed "of course there is a bit of sadness" after a "long, long" professional investment.

"You are going to miss it. But OK, life goes on," he shrugged.

For the scientists who will sift through the data for years, possibly decades, to come, this is not the end, however.

Comets like 67P are thought to contain primordial material preserved in a dark space deep freeze.

Insights gleaned from the EUR 1.4 billion ($1.5 billion) project have shown that comets crashing into an early Earth may well have brought amino acids, the building blocks of life.

Comets of 67P's type, however, certainly did not bring water, scientists have concluded.

Another highlight of Rosetta's descent was a one-off chance to peer into mysterious pits dotting the landscape for hints as to what the comet's interior might look like.

"Scientists are like children: they dream without limits. There is nothing better than making dreams of children become a reality," Accomazzo told AFP.

"This is the feeling we have. For me today is mission accomplished."