Robot Flies to Germany as Airline Passenger From Los Angeles 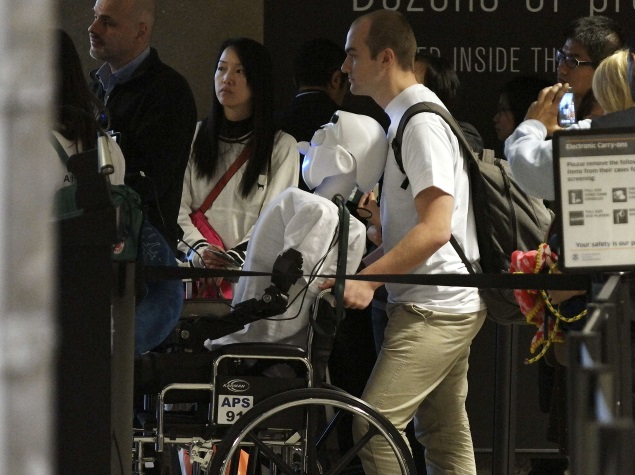 A humanoid robot with a head, hands and feet and wearing stylish red sneakers boarded a flight for Germany at Los Angeles International Airport on Monday, becoming what was billed as the first robot traveling as a paid passenger on an airline.

The robot, named Athena, created a scene at the Tom Bradley International Terminal as she was pushed in a wheelchair up to the Lufthansa counter to pick up her ticket to Frankfurt. Television crews swarmed, camera flashes went off and people aimed their cell-phone cameras at her, exclaiming: "It's a robot!"

Built by the Salt Lake City engineering and robotics company Sarcos, Athena was purchased by Germany's Max Planck Society, which along with researchers at the University of Southern California are trying to make her perform tasks too dangerous for humans, such as cleanup after the nuclear disaster at Fukushima, Japan.

"We don't want humans to go there and sacrifice their lives," said Max Planck doctoral student Alexander Herzog, who was pushing Athena through the airport. "I would like to have a robot achieve the same task, such as opening up doors and cleaning up."

Right now, Athena can do little more than sit and bask in attention. The software to make her legs move and stand is still in the works, though her arms can operate and her mouth glows blue on a white head fitted with cameras and sensors.

She got an economy ticket but still enjoyed special treatment, including a cut to the front of the ticket line in the first-class lane.

And while Athena did not have to go through the regular metal detector, the Transportation Security Administration had a special electronic pat-down awaiting, said airport spokeswoman Nancy Suey Castles. "TSA didn't want us to say what it was," she said.

As for the flight, Athena was strapped into a seat like a regular passenger, but was put in the off position, accompanied all the way to her new laboratory home in Germany by Herzog and Jeannette Bohg, senior research scientist at the Max Planck Society.

Representatives for Lufthansa could not be reached for comment.

Athena could have been shipped in a big box like any other electronic gear, but the scientists "wanted to see how humans responded to a robot sitting in a plane," said Castles.

Plus, added Herzog, "It's cheaper to get a seat."