Next Task for NASA's OSIRIS-REx Spacecraft: Kiss an Asteroid and Avoid Mount Doom

The spacecraft will suck up material from a "precarious" crater on the asteroid Bennu. 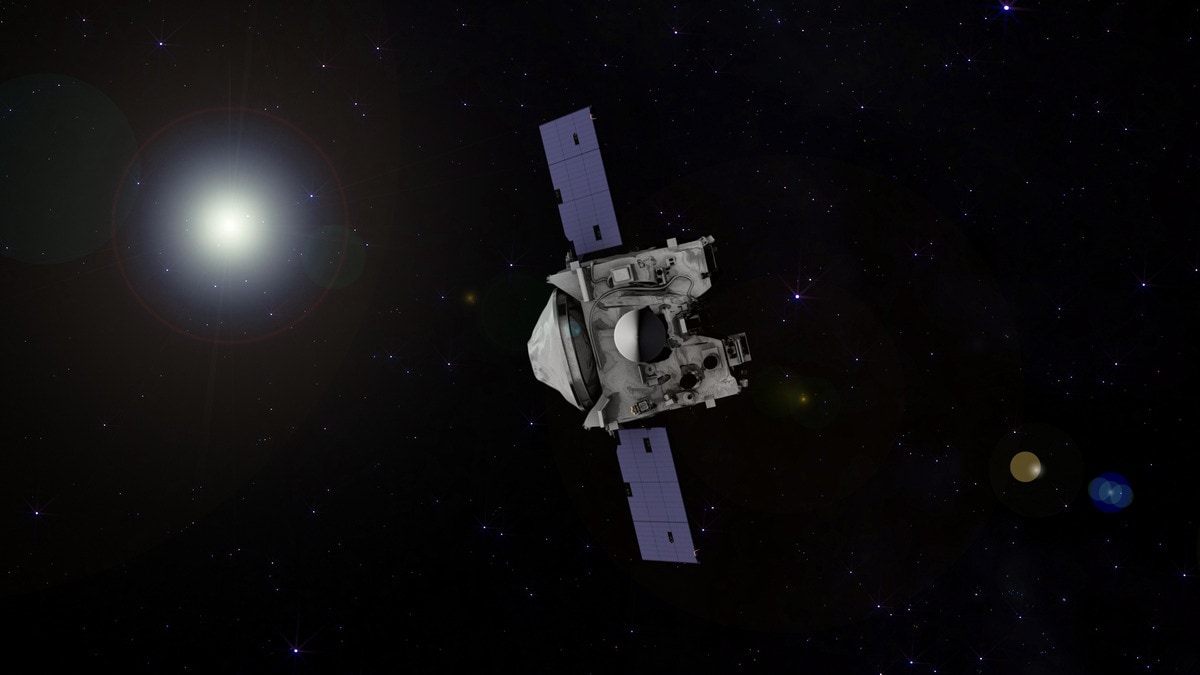 Plunge perilously into an alien crater. Ever-so-gently touch the asteroid's rocky surface. Suck up a few handfuls of pebbles and dust. Navigate out of the crater, avoiding the jagged rock walls and a boulder called "Mount Doom." Then fly back home to Earth. This is the tricky task NASA has set for OSIRIS-REx, a small spacecraft on a multiyear quest to collect fragments of an asteroid. It will push the limits of the SUV-size probe, which has already set multiple solar system records for its ambitious orbits. And it will test scientists' abilities to coordinate complex space manoeuvres from more than a million miles away.

But if OSIRIS-REx succeeds, it will gather material from the very earliest days of the solar system - material that could carry clues about our beginnings and perhaps even the ingredients for life.

The choice to sample from this challenging site was announced last week at the annual meeting of the American Geophysical Union.

"It was not an easy decision," Lori Glaze, director of NASA's planetary science division, told colleagues at a NASA town hall. "But I think this is what we're doing at our best."

OSIRIS-REx's target asteroid, Bennu, is the size of the Empire State Building and the shape of a Fruit Gusher candy. Instead of sugar, it's made of carbon-rich rock - the kind of material researchers believe is representative of the disk of swirling gas and dust from which the solar system formed.

Though "carbonaceous" asteroids have been surveyed by telescopes and collected in the form of meteorites that fall to Earth, scientists have never been able to study pristine material from one up close. With OSIRIS-REx, they hope, they will get their first chance.

The spacecraft is equipped with an extendible arm containing a nitrogen gas canister and a sample collection tube. Sometime next August, in a maneuver that has been compared to a high-five, a kiss and blowing a raspberry, it will descend to Bennu's surface, reach out the arm, and release a puff of gas that sends pebbles and dust flying up from the surface and into the collection tube.

The probe has been surveying Bennu in painstaking detail for more than a year, searching for the perfect place to conduct this complex operation. Bennu is the smallest object a spacecraft has ever orbited, and OSIRIS-REx has already gotten closer to the asteroid than any other craft has gone before.

The terrain across the asteroid is far more treacherous than OSIRIS-REx was originally designed to navigate. Where scientists had expected to find a relatively smooth and dust-covered surface, Bennu is "rocky and blocky," Glaze said, with very little material fine enough to fit in the sampling instrument. The spacecraft could be irreversibly damaged if a quirk of gravity or minute flying miscalculation directed it into one of Bennu's crags or cliffs. And whatever maneuvering OSIRIS-REx might need to do, it will have to do alone. Radio signals take 15 minutes to travel from Bennu to Earth - much too long for scientists on the ground to operate the probe like a remote-controlled model airplane.

So, over the course of OSIRIS-REx's many orbits, engineers have built a map of all Bennu's many hazards. Using a tool called Natural Feature Tracking, OSIRIS-REx will be able to match what it sees during its descent with the prepared list of objects to avoid. Michael Moreau, an engineer at NASA's Goddard Space Flight Center and navigator for the mission, estimated that the upgrades to the probe's navigational systems have made it five times more precise.

"Those steps have been taken to allow us to get into what is otherwise a pretty precarious site on Bennu," he said.

The sample site, a spot known as Nightingale, sits in a crater in Bennu's northern hemisphere. It harbors a collection of cold, colorful material that the mission's image-processing lead, University of Arizona planetary scientist Daniella DellaGiustina, deemed some of the most scientifically interesting rocks on the asteroid.

But the site is just 52 feet in diameter - a tight fit for OSIRIS-REx's 20-foot wingspan. It's surrounded by jagged rocks and shadowed by the 20-foot precipice of Mount Doom.

"We're essentially trying to navigate the spacecraft down to a location that's the width of a couple parking spaces, and it's just a few steps away from a two- or three-story-tall building," Moreau said. And they're doing it from millions of miles away.

OSIRIS-REx is equipped with three nitrogen canisters, meaning NASA has three chances to collect its precious sample. The mission team has also picked out an easier-to-access backup site, called Osprey, if their efforts at Nightingale are unsuccessful.

But the spacecraft has to finish its work by spring 2021, when the orbits of Bennu and Earth are best aligned for OSIRIS-REx to start its journey home.

The sample container is expected to land in Utah in September 2023.