New Ultra-Sensitive Nanotech Chip to Detect Explosives at a Distance 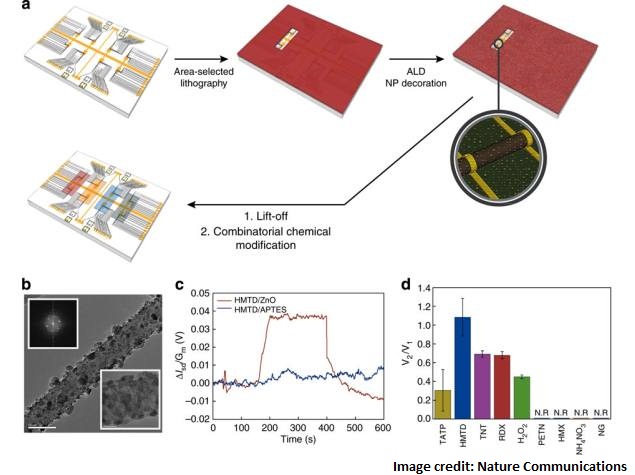 A new electronic chip with microscopic chemical sensors can detect explosives in the air at concentrations as low as a few molecules per 1,000 trillion, its Israeli developers said Tuesday.

The nanodevice can identify several different types of explosives in real time, even at a distance of several metres from the source, they wrote in the journal Nature Communications.

The gadget, still in the prototype phase, is small enough to be portable yet so sensitive it can pick out explosives traces that would otherwise be masked by stronger chemicals.

"Different explosives species display a distinctive pattern of interaction with the nanosensing array, thus allowing for a simple and straightforward identification of the molecule under test," the team wrote.

They can detect few explosive types and only at higher concentrations.

Nanomaterials, on the other hand, "offer the ability of incorporating multiple sensors capable of detecting numerous chemical threats simultaneously on a single miniature array platform."

The team built a prototype chip using clusters of nano-sized transistors that are extremely sensitive to chemicals - causing changes in their electrical conductance upon surface contact.

The researchers tested the device's reaction to explosives like TNT, RCX and HMX used in commercial blasting and military applications, as well as peroxide-based ones like TATP and HMTD which are commonly used to build home-made bombs but are hard to detect with existing methods.

Some tests were done under "highly-contaminated" conditions, like heavy cigarette smoke, to demonstrate the chip's accuracy.

TATP particles could be detected five metres from the source, said the team, and TNT four metres.

Only five seconds of air sample collection was required through a paper filter.

"These promising results demonstrate the potential capability of our sensing platform for the remote detection of explosive species," they wrote.

"The development of novel approaches for the sensitive and rapid detection of these hazardous molecules is of great importance in the field of homeland security."
Comments