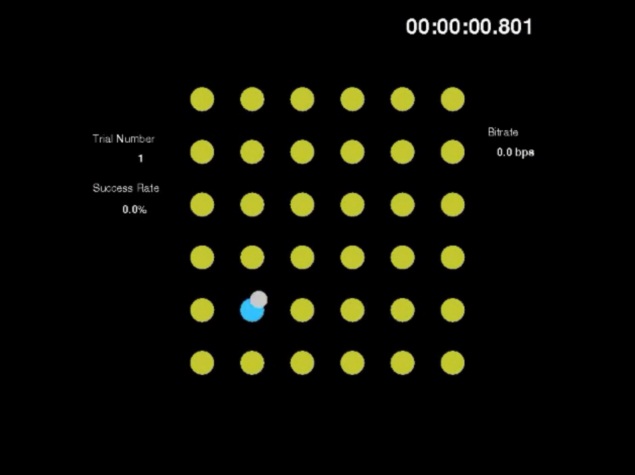 A new technique that corrects brain readings to allow paralysed people to use a thought-controlled cursor more accurately has been developed by a team led by an Indian-origin researcher.

In essence the prostheses analyse the neuron sample and make dozens of corrective adjustments to the estimate of the brain's electrical pattern - all in the blink of an eye.

The thought-controlled keypad would allow a person with paralysis or ALS to run an electronic wheelchair and use a computer or tablet.

"Brain-controlled prostheses will lead to a substantial improvement in quality of life," Shenoy said.

The new corrective technique is based on a recently discovered understanding of how monkeys naturally perform arm movements.

The researchers studied animals that were normal in every way. The monkeys used their arms, hands and fingers to reach for targets presented on a video screen.

What the researchers sought to learn through hundreds of experiments was what the electrical patterns from the 100- to 200-neuron sample looked like during a normal reach.

In short, they came to understand the "brain dynamics" underlying reaching arm movements.

In their current experiments, Shenoy's team distilled their understanding of brain dynamics into an algorithm that could analyse the measured electrical signals that their prosthetic device obtained from the sampled neurons.

The algorithm tweaked these measured signals so that the sample's dynamics were more like the baseline brain dynamics. The goal was to make the thought-controlled prosthetic more precise.

To test this algorithm the researchers trained two monkeys to choose targets on a simplified keypad. The keypad consisted of several rows and columns of blank circles.

When a light flashed on a given circle the monkeys were trained to reach for that circle with their arms.

The prosthetic scored 26 thought-taps in 30 seconds, about 90 percent as quickly as a monkey's finger.

Windows 10: Users, Experts Raise Privacy Concerns
Microsoft HoloLens to Launch for Developers 'Within the Next Year'