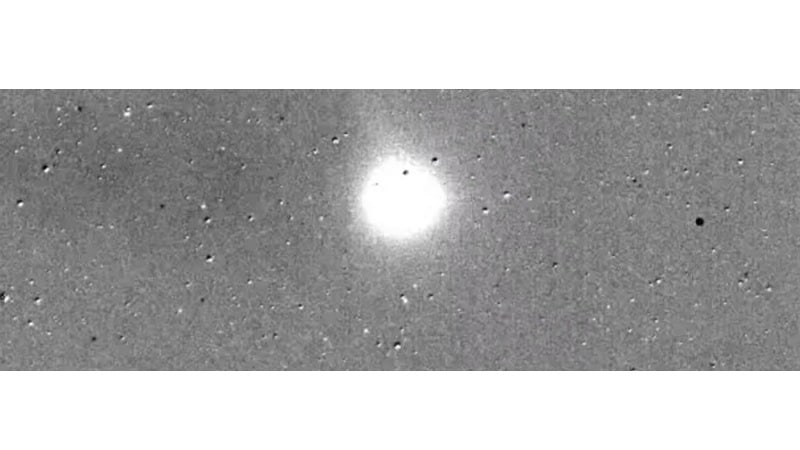 NASA's latest planet hunter Transiting Exoplanet Survey Satellite (TESS) has captured a stunning sequence of images showing the motion of a comet that is 48 million km from Earth.

Launched in April, TESS took a series of images of the comet C/2018 N1, over the course of 17 hours on July 25 -- the day the planet hunter officially commenced its science operations, the US space agency said in a statement.

C/2018 N1 is located about 29 million miles (48 million km) from Earth in the southern constellation Piscis Austrinus and is seen to move across the frame from right to left as it orbits the Sun.

The planet hunter snapped a series of images capturing the motion of the comet which demonstrate the satellite's ability to collect a prolonged set of stable periodic images covering a broad region of the sky, all critical factors in finding transiting planets orbiting nearby stars, the statement said.

The comet's tail, which consists of gases carried away from the comet by an outflow from the Sun called the solar wind, extends to the top of the frame and gradually pivots as the comet glides across the field of view.

Additionally, TESS' images reveal a treasure trove of other astronomical activity. The stars appear to shift between white and black as a result of image processing, NASA said.

Towards the end of the video, a faint broad arc of light moving across the middle section of the frame from left to right can be seen.

This is stray light from Mars, which is located outside the frame. The images were taken when Mars was at its brightest near opposition, or its closest distance, to Earth, NASA said.

TESS is NASA's latest satellite to search for planets outside our solar system, known as exoplanets.

The planet hunter is expected to transmit its first series of science data back to Earth in August and thereafter periodically every 13.5 days, once per orbit, as the spacecraft makes it closest approach to Earth, NASA said.