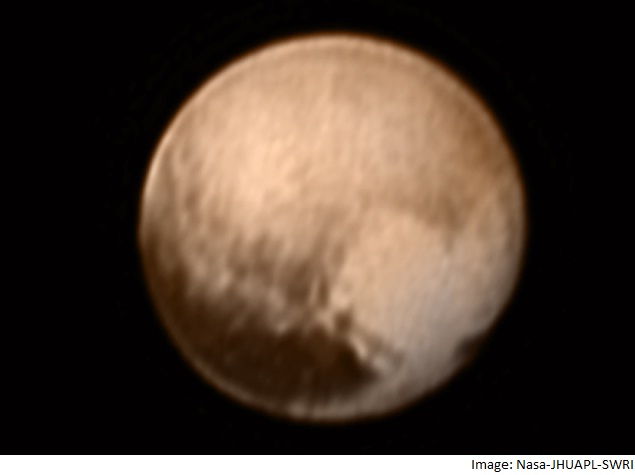 A heart-shaped feature was viewed on Pluto's surface in the most detailed photo yet returned by Nasa's New Horizons probe, which has now begun its final run of its historic flyby of the planet.

In the early morning hours on Wednesday, mission scientists received the clearest image of the reddish-brownish dwarf planet by the Long Range Reconnaissance Imager (LORRI) aboard the New Horizons, a Nasa statement read.

The image, which New Horizons took on Tuesday when it was less than 5 million miles (8 million kilometres) from Pluto, shows a large, heart-shaped feature on the dwarf planet's surface that measures about 1,200 miles (2,000 kilometres) wide.

To its left lies an 1,860-mile-long (3,000-kilometre-long) dark patch along Pluto's equator that mission scientists are calling the "whale". Above those features is a polar region that is intermediate in brightness.

This view is centred roughly on the area that will be seen close-up during New Horizons' closest approach on July 14 . This side of Pluto is dominated by three broad regions of varying brightness.

"The next time we see this part of Pluto at closest approach, a portion of this region will be imaged at about 500 times better resolution than we see today. It will be incredible!," said Jeff Moore, Geology, Geophysics and Imaging Team Leader of Nasa's Ames Research Center.

After a voyage of nine years, New Horizons is almost 3 billion miles (4.8 billion km) away, where radio signals, even travelling at the speed of light, need 4.5 hours to reach Earth. Round-trip communication between the spacecraft and its operators requires about nine hours.

How You Can Get the Apple News App on iOS 9 Outside the US
Developers Can Now Price Their Paid iOS Apps as Low as Rs. 10