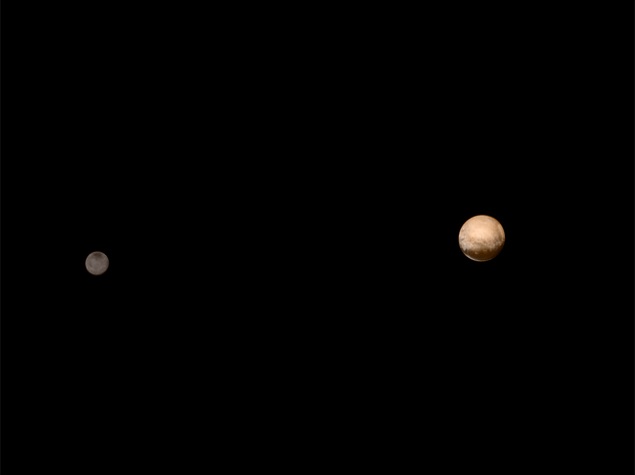 Mysterious Pluto looms large and turns out to be larger than expected as Nasa's New Horizons spacecraft wraps up a nearly decade-long journey, with a close flyby on track for Tuesday, scientists said on Monday.

The nuclear-powered probe was in position to pass dead centre of a 60-by-90-mile (97-by-145 km) target zone between the orbits of Pluto and its primary moon, Charon, at 7:49 a.m. EDT (1149 GMT) on Tuesday, said managers at New Horizons mission control centre, located at the Johns Hopkins University Applied Physics Laboratory outside of Baltimore.

After a journey of 3 billion miles (4.88 billion km), threading that needle is like golfer in New York hitting a hole-in-one in Los Angeles, project manager Glen Fountain told reporters.

During the 30-minute dash past Pluto and its entourage of five moons, New Horizons will perform a carefully choreographed series of manoeuvres to position its cameras and science instruments for hundreds of observations.

Already, scientists have learned that Pluto, once considered the ninth and outermost planet of the solar system, is bigger than thought, with a diameter of about 1,473 miles (2,370 km), some 50 miles (80 km) wider than previous predictions. Pluto is now officially bigger than Eris, one of hundreds of thousands of mini-planets and comet-like objects circling beyond Neptune in a region called the Kuiper Belt. The discovery of this region in 1992 prompted the official reclassification of Pluto from planet to "dwarf planet."

Size matters, even for dwarf planets. The notch up in girth means that Pluto consists of slightly more ice and a little less rock than predicted, an important detail for scientists piecing together the story of how it and the rest of the solar system formed.

"The Pluto system is a fossil remnant of the beginnings of our solar system," said Nasa chief scientist John Grunsfeld. "We're going to learn more about that."

Pluto's diameter also affects the size of its atmosphere, which New Horizons has learned is bleeding off into space at a faster rate than expected.

Most of New Horizons' data will be stored on the spacecraft and transmitted back to Earth after the probe passes beyond the Pluto system. Flight controllers expect to receive just a short message from New Horizons around 9 p.m. on Tuesday that it survived the Pluto encounter.

Lead scientist Alan Stern said there was a one-in-10,000 chance that a debris strike could destroy New Horizons as it nears Pluto.

"We're flying into the unknown," Stern said. "I don't lose sleep over this, but fact is, tomorrow evening is going to be a little bit of drama."