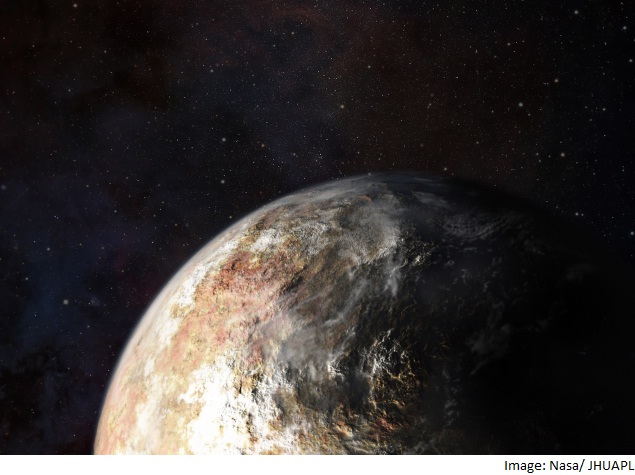 Nasa's New Horizon spacecraft has captured stunning coloured images of Pluto as it gets ready for a close flyby of the mysterious planet system on July 14.

The images show two very different faces of the mysterious dwarf planet, one with a series of intriguing spots along the equator that are evenly-spaced.

Each of the spots is about 480km in diameter, with a surface area that is roughly the size of the US state of Missouri, the US space agency said in a statement.

Scientists have yet to see anything quite like the dark spots.

"It's a real puzzle - we don't know what the spots are and we cannot wait to find out," said New Horizons principal investigator Alan Stern.

Also puzzling is the long-standing and dramatic difference in the colours and appearance of Pluto compared to its darker and greyer moon Charon.

While the origin of the spots is a mystery for now, the answer may be revealed as the spacecraft continues its approach to the mysterious planet system.

If Pluto has clouds, New Horizon can detect them.

"If we find clouds, their presence will allow us to track the speeds and directions of Pluto's winds," added Kelsi Singer of the Southwest Research Institute in Boulder.

For more than two decades, planetary scientists have raced to get a spacecraft to Pluto against predictions that its atmosphere would disappear literally freezing onto the surface before it could be explored.

"Pluto's atmosphere is alive and well, and has not frozen out on the surface," noted New Horizons deputy project scientist Leslie Young.