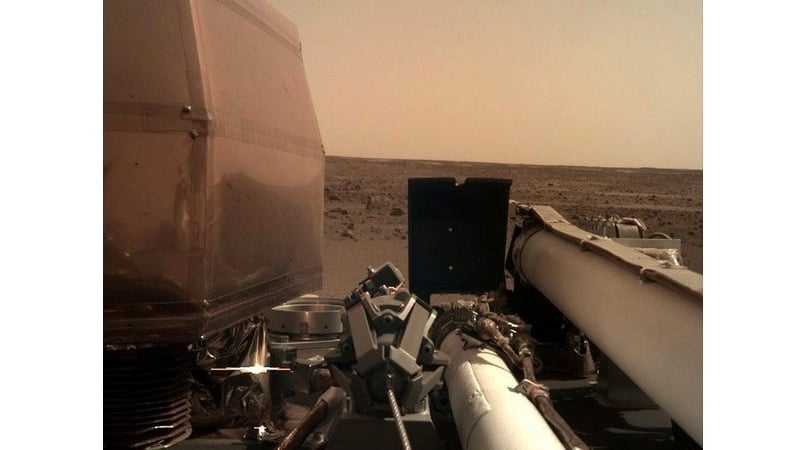 After safely landing on Mars following its nearly seven month journey, NASA has released the first pictures taken by its InSight spacecraft, which has opened its solar arrays to charge batteries.

The $993 million (roughly Rs. 6,900 crores) lander, which landed on Monday and appears to be in good shape, will soon begin unfolding its robotic arm and deploying its quake-sensors on the Martian surface.

NASA engineers are planning to begin work with its robotic arm soon, but are proceeding with caution.

The arm has five mechanical fingers to help it lift out and place its two instruments on Martian soil in the coming few months.

"Slowly releasing all my pent-up tension, starting with loosening my grapple, as these before-and-after pics show," said the NASA InSight Twitter account.

"Until I'm ready to stretch my arm out, my camera angles will be the same."

InSight is equipped with two full-colour cameras and has already sent back six shots since touching down.

The waist-high spacecraft will stay in place for the two-year duration of its mission.

NASA has not said anything about the condition of the other instruments on board, which include a French-made seismometer to study Marsquakes and a German self-hammering mole to measure heat's escape from the planet.

NASA did say its solar arrays have deployed, which is good news since the lander runs on solar energy.

In Paris, the French space agency CERN said everything seems fine for the moment, and that it is up to NASA to communicate with the SEIS quake-sensing instrument.