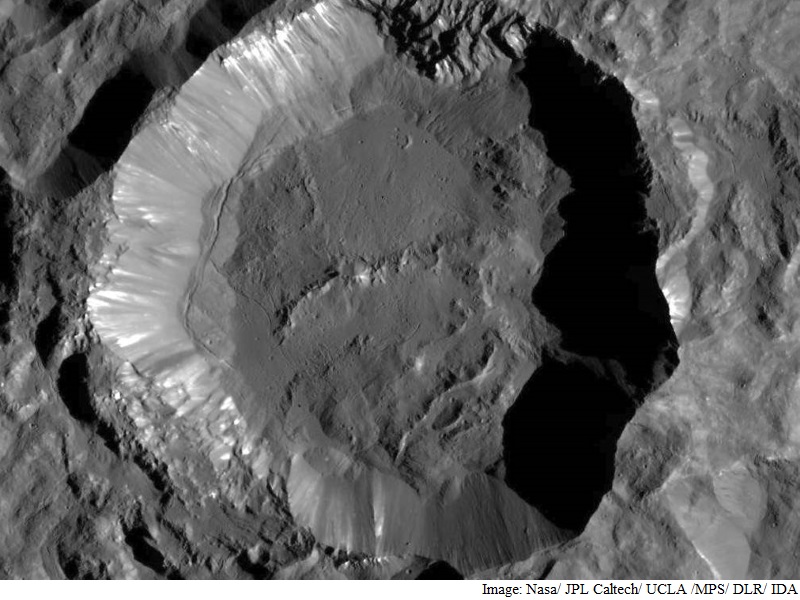 Nasa's Dawn spacecraft that recently reached its lowest-ever altitude at the dwarf planet Ceres has sent fresh images that show Kupalo Crater, one of the youngest craters on Ceres, in a fascinating light.

The crater has bright material exposed on its rim which could be salts and its flat floor likely formed from impact melt and debris.

Researchers will be looking closely at whether this material is related to the "bright spots" of Occator Crater.

Kupalo, which measures 26 km across and is located at southern mid-latitudes, is named for the Slavic god of vegetation and harvest.

"This crater and its recently-formed deposits will be a prime target of study for the team as Dawn continues to explore Ceres in its final mapping phase," said Paul Schenk, a Dawn science team member at the Lunar and Planetary Institute, Houston.

Dawn took these images near its current altitude of 385 km from Ceres.

Dawn's low vantage point also captured the dense network of fractures on the floor of 126-km-wide Dantu Crater. One of the youngest large craters on Earth's moon, called Tycho, has similar fractures.

This cracking may have resulted from the cooling of impact melt, or when the crater floor was uplifted after the crater formed.

The spacecraft will remain at its current altitude for the rest of its mission, and indefinitely afterward. The end of the prime mission will be June 30, 2016.