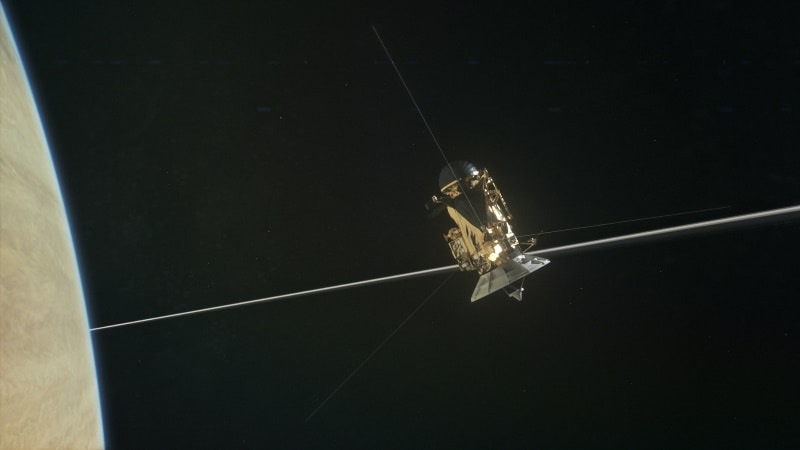 Cassini is set for its second dive through the narrow gap between the planet Saturn and its rings on Tuesday at 3:38pm EDT, NASA said.

During its orbit, in advance of the crossing, Cassini's cameras have been looking closely at the rings.

As with the first Grand Finale dive, Cassini would be out of contact during closest approach to Saturn, and was scheduled to transmit data from this dive on May 3, the US space agency said in a statement.

Cassini made its first dive through the region on April 26 and discovered that the region appears to be relatively dust-free.

With this information in hand, the Cassini team would now move forward with its preferred plan of science observations.

"The region between the rings and Saturn is 'the big empty,' apparently," said Cassini Project Manager Earl Maize of NASA's Jet Propulsion Laboratory in Pasadena, California.

"Cassini will stay the course, while the scientists work on the mystery of why the dust level is much lower than expected," Maize said.

A dustier environment in the gap might have meant the spacecraft's saucer-shaped main antenna would be needed as a shield during most future dives through the ring plane.

This would have forced changes to how and when Cassini's instruments would be able to make observations.

Cassini engineers were delighted that the "plan B" option may no longer be needed.

Launched in 1997, Cassini arrived at Saturn in 2004. Following its last close flyby of the large moon Titan on April 21, Cassini began what mission planners are calling its "Grand Finale".

During this final chapter, Cassini loops Saturn approximately once per week, making a total of 22 dives between the rings and the planet.

There are now 21 dives remaining. Four of them pass through the innermost fringes of Saturn's rings, necessitating that the antenna be used as a shield on those orbits.

The spacecraft is on a trajectory that would eventually plunge it into Saturn's atmosphere - and end Cassini's mission - on September 15.

Cassini is a joint endeavour of NASA, the European Space Agency (ESA), and the Italian space agency (ASI).