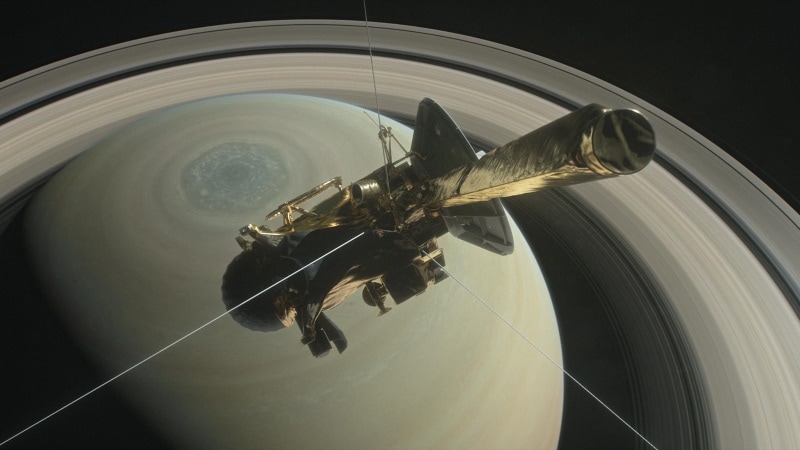 NASA's Cassini spacecraft, which was launched in 1997 and arrived at Saturn in 2004, is about to begin the final chapter of its remarkable story this month.

On April 26, the spacecraft will make the first in a series of dives through the 2,400-kilometre gap between Saturn and its rings as part of the mission's grand finale, NASA said.

"No spacecraft has ever gone through the unique region that we'll attempt to boldly cross 22 times," said Thomas Zurbuchen, Associate Administrator for the Science Mission Directorate at NASA Headquarters in Washington.

"What we learn from Cassini's daring final orbits will further our understanding of how giant planets, and planetary systems everywhere, form and evolve. This is truly discovery in action to the very end," Zurbuchen added.

During its time at Saturn, Cassini has made numerous dramatic discoveries, including a global ocean that showed indications of hydrothermal activity within the icy moon Enceladus, and liquid methane seas on its moon Titan.

Now 20 years since launching from Earth, and after 13 years orbiting the ringed planet, Cassini is running low on fuel.

In 2010, NASA decided to end the mission with a purposeful plunge into Saturn in 2017.

Using expertise gained over the mission's many years, Cassini engineers designed a flight plan that will maximise the scientific value of sending the spacecraft toward its fateful plunge into the planet on September 15.

Cassini will transition to its grand finale orbits, with a last close flyby of Saturn's giant moon Titan, on April 22.

As it has many times over the course of the mission, Titan's gravity will bend Cassini's flight path.

Cassini's orbit then will shrink so that instead of making its closest approach to Saturn just outside the rings, it will begin passing between the planet and the inner edge of its rings.

When Cassini makes its final plunge into Saturn's atmosphere on September 15, it will send data from several instruments - most notably, data on the atmosphere's composition - until its signal is lost, NASA said.