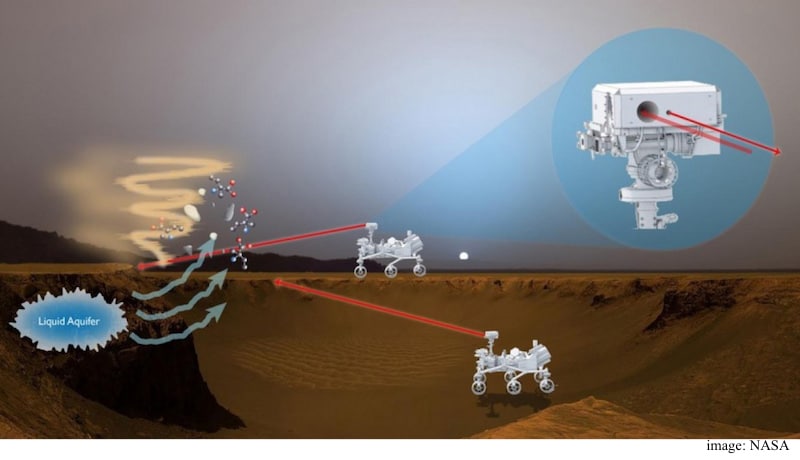 To hunt for tiny whiffs of life on Mars, NASA scientists want to follow a mechanical nose. It is a far cry from the schnozz on your or my face, but instead a perceptive laser sensor already employed by the military to detect biological threats.

On Tuesday, a team of researchers at NASA's Goddard Space Flight Center in Maryland announced they will adapt the sensor for future missions to Mars and the rest of the solar system. Based on US military technology, the Defense Department's Joint Biological Standoff Detection System, the machine cannot directly confirm the existence of living things. Rather, it is capable of scouring the environment for amino acids and the other organic molecules required for biology as we know it.

As it will not be used to detect germ warfare or chemical weapons traces in space, NASA's Goddard Space Flight Center renamed the device the Bio-Indicator Lidar Instrument. The space center likened the tool to a Mars rover's sense of smell, as though NASA were shipping a beagle to the Red Planet.

"NASA has never used it before for planetary ground level exploration," said Branimir Blagojevic, a technologist with NASA who previously worked in the private sector to create the bio-indicator device, in a news release. "If the bio-signatures are there," he said, meaning organic traces on Mars, "it could be detected in the dust."

As it says in the name, the tool requires lidar to operate. Lidar, for the unfamiliar, is a technological second cousin to active radar. Where radar produces radio waves, lidar uses laser pulses - light, in other words; the name itself is an acronym for Light Detection and Ranging.

The principle for both lidar and radar systems is the same. The device shoots out a signal, which reflects off of a target and returns to a receiver. The machine then interprets what the object is, depending upon how the signal bounces back. (Perhaps an echolocating bat would be a better spirit animal for such an instrument than a hound.)

Lidar's roots lie in the laser sensors of the '60s and '70s. The technology has a wide range of applications. Autonomous vehicle companies like Google are evaluating lidar for self-driving automobiles to sense and avoid obstacles. NASA has also used lidar-equipped airplanes to observe Earth's atmospheric chemistry.

The lidar system announced Tuesday emits ultraviolet laser pulses. The beams' tiny wavelengths are impossible to see but ideal for ricocheting off particles. When they hit a molecule, the UV pulses excite that particle's electrons. Just how disturbed the laser makes the electrons in turn sheds light on the particles' size and age.

If the lidar system makes it to Mars, it will not be the first laser sensor fired at the Red Planet. For four-and-a-half years, until 2001, NASA's Mars Orbiter Laser Altimeter mapped the planet as it flew over Martian craters, hills and valleys. The Curiosity rover, active on Mars, has a laser it fires to examine the content of Martian rocks.

Curiosity also has an onboard scooper to collect and analyze soil. Though it can peer into the depths of these little clumps, using a lidar system will be less power-intensive while offering a broader sweep of the land. As Blagojevic put it, "This is a survey instrument, with a nose for certain molecules."

The researchers did not say when NASA plans to use the lidar system, but are currently testing the instrument here on Earth, making it more rugged to survive Martian harshness. Although the space agency is preparing to send another rover to Mars in summer 2020, Goddard did not suggest it would include the lidar tool. In a proposal, Blagojevic and his colleagues suggest the system would be useful for the potential Icebreaker Life mission, in which a rover would explore what lies beneath frozen Martian polar plains.