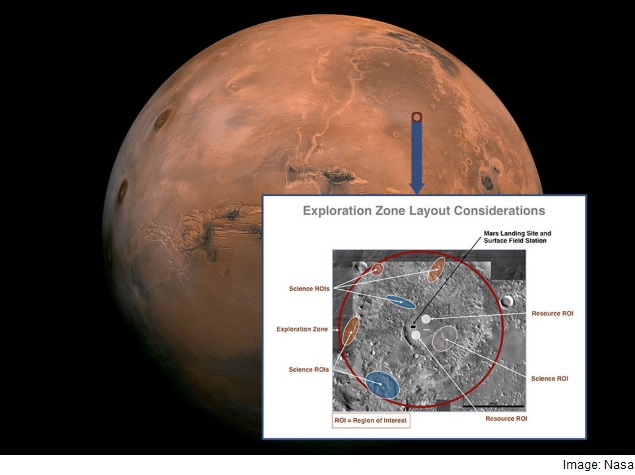 In its bid for the next giant leap to Mars, Nasa is seeking ideas for enabling human explorers to safely land, live and work on the Red Planet.

Nasa's first "Landing Site/Exploration Zone Workshop for Human Missions to the Surface of Mars" will be held October 27-30 at the Lunar and Planetary Institute in Houston.

The conference will start the process for choosing sites on Mars that Nasa's Mars Reconnaissance Orbiter and Mars Odyssey spacecraft - along with any future missions over the coming decades - could then further image to create better maps and provide valuable scientific data of these potential exploration zones.

Nasa hopes to engage scientists, technologists and experts in human exploration during the conference, fostering collaboration among the teams that will enable humans to live on and explore Mars in the coming decades, the US space agency said in a statement.

Potential exploration zones will need to offer compelling science research while providing resources that astronauts can take advantage of during their pioneering of the Red Planet.

First explorers are expected to be limited to about 100 km of travel from their landing site due to life support and exploration technology requirements.

"The life expectancy of the existing MRO and Odyssey spacecraft being limited, Nasa is eager to gather high-resolution maps of potential exploration zones while the spacecraft, already well beyond their design lifetime, are still operational," the statement read.