NASA Scientists Developing Metal Fabrics for Use in Space 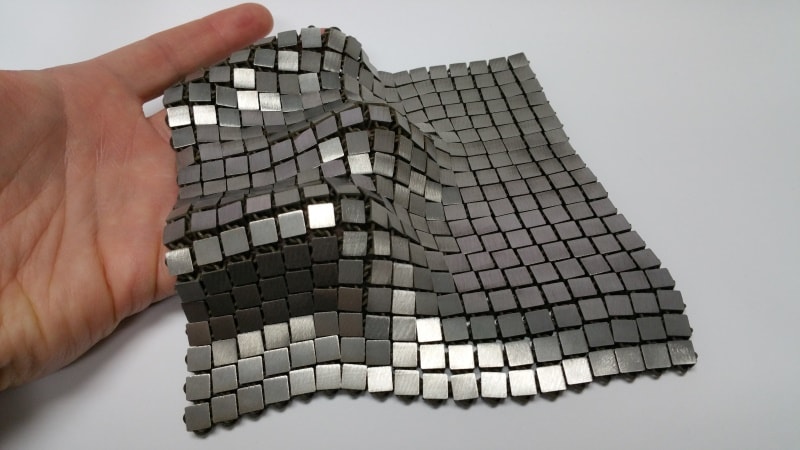 NASA scientists are designing metal fabrics that could one day be used for astronaut spacesuits, to shield a spacecraft from meteorites, or for capturing objects on the surface of another planet.

The prototypes that Raul Polit-Casillas, a systems engineer at NASA's Jet Propulsion Laboratory in Pasadena, California, and colleagues have created look like chain mail, with small silver squares strung together.

But these fabrics were not sewn by hand; instead, they were "printed," created in one piece with advanced technologies, NASA said.

One side of the fabric reflects light, while the other absorbs it, acting as a means of thermal control. It can fold in many different ways and adapt to shapes while still being able to sustain the force of pulling on it.

The researchers believe that the fabrics could also potentially be useful for large antennas and other deployable devices, because the material is foldable and its shape can change quickly.

One potential use might be for an icy moon like Jupiter's Europa, where these fabrics could insulate the spacecraft. At the same time, this flexible material could fold over uneven terrain, creating "feet" that would not melt the ice under them.

A technique called additive manufacturing, otherwise known as 3D printing on an industrial scale, is necessary to make such fabrics.

Unlike traditional manufacturing techniques, in which parts are welded together, additive manufacturing deposits material in layers to build up the desired object. This reduces the cost and increases the ability to create unique materials.

"We call it '4-D printing' because we can print both the geometry and the function of these materials," said Polit-Casillas.

Fabricating spacecraft designs can be complex and costly, said Andrew Shapiro-Scharlotta of JPL, whose office funds research for early-stage technologies like the space fabric.

Adding multiple functions to a material at different stages of development could make the whole process cheaper, he said.

It could also open the door to new designs.

"We are just scratching the surface of what's possible," Shapiro-Scharlotta said. "The use of organic and non-linear shapes at no additional costs to fabrication will lead to more efficient mechanical designs," he added.

The JPL team not only wants to try out these fabrics in space someday, they want to be able to manufacture them in space, too.