A giant robot at the Nasa facility is helping engineers build the biggest, lightweight composite rocket parts so far made for future space vehicles to deeper missions including Mars.

Mounted on a 40-foot-long track at the composites technology centre of Nasa's Marshall Space Flight Center in Huntsville, Alabama, the robot's head has 16 spools of composite fibre tape that it releases in precise patterns to make both small and large objects.

To make large composite structures, the robot  travels on the track and a head at the end of its 21-foot robot arm articulates in multiple directions.

As the fibres are released, they are heated so that they adhere to various surfaces. The head can be changed out for different projects.

"We will build and test these structures to determine if they are a good fit for space vehicles that will carry humans on exploration missions to Mars and other places," he added.

It takes a myriad of different materials to build a space vehicle like Nasa's new Space Launch System (SLS), a heavy-lift rocket designed to take explorers on deep space missions including Mars. 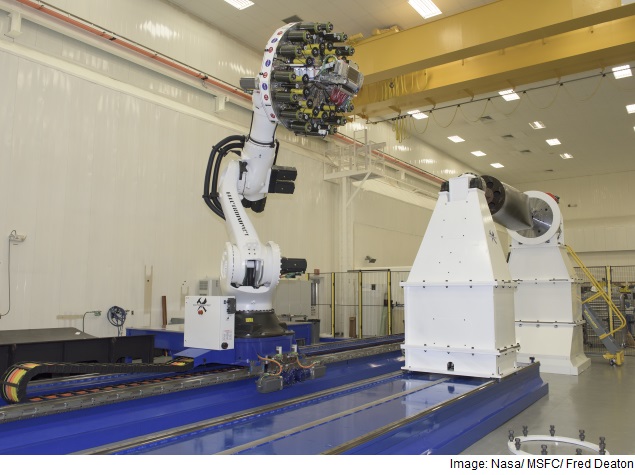 The lighter the rocket, the more payload - crew, science instruments, food, equipment and habitats - the rocket can carry to space.

Lightweight composites have the potential to increase the amount of payload that can be carried by a rocket along with lowering its total production cost.

"The robot will build structures larger than eight metres (26 feet) in diameter, some of the largest composite structures ever constructed for space vehicles," informed Justin Jackson, Marshall materials engineer who installed and checked out the robot.

Composite manufacturing has advanced tremendously in the last few years.

These new robotic fibre placement tools are game changers because they can drastically reduce the cost and improve the quality of large space structures, the statement said.