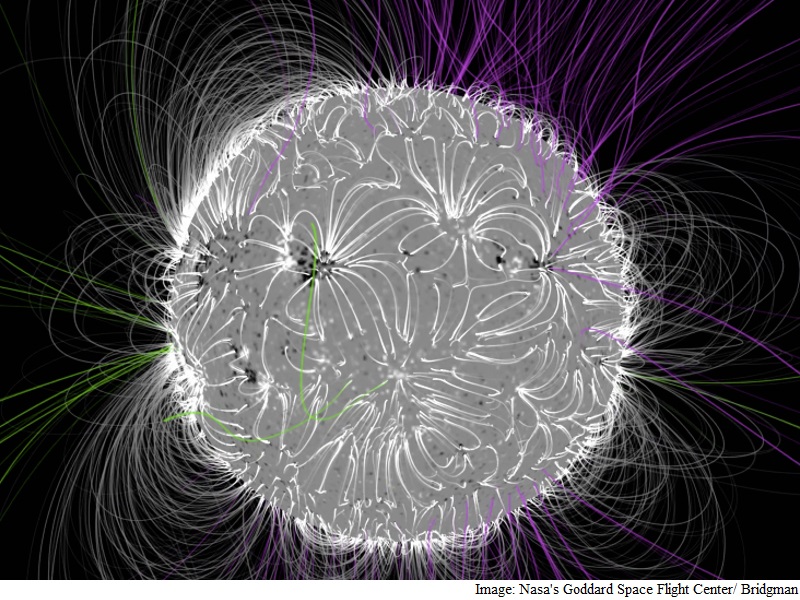 Nasa space scientists, trying hard to understand the Sun's electromagnetic field that is crucial for future deep space travel, have released a first-ever video model of the Sun showing how its magnetic field behaves.

The video displays invisible magnetic lines where the Sun appears as a mass of noodle-like energy in constant flux, pulsating and sending out bursts of magnetically-charged particles.

For this, they have turned to a combination of real time observations and computer simulations to best analyse how material courses through the solar upper atmosphere - the million-degree corona which cannot be seen in the visible light.

"We're not sure exactly where in the sun the magnetic field is created. It could be close to the solar surface or deep inside the sun - or over a wide range of depths," said Dean Pesnell, space scientist at Nasa's Goddard Space Flight Centre in Greenbelt, Maryland.

Getting a handle on what drives that magnetic system is crucial for understanding the nature of space throughout the solar system.

The Sun's magnetic field is responsible for everything from the solar explosions that cause space weather on the Earth - such as auroras - to the interplanetary magnetic field and radiation through which our spacecraft journeying around the solar system must travel.

"So how do we even see these invisible fields? First, we observe the material on the Sun. The sun is made of plasma, a gas-like state of matter in which electrons and ions have separated, creating a super-hot mix of charged particles," the US space agency said in a statement.

"We can observe the shape of the magnetic fields above the Sun's surface because they guide the motion of that plasma - the loops and towers of material in the corona glow brightly in images," Pesnell added.

Additionally, the footpoints on the Sun's surface or photosphere of these magnetic loops can be more precisely measured using an instrument called a magnetograph, which measures the strength and direction of magnetic fields.

"At solar maximum, the magnetic field has a very complicated shape with lots of small structures throughout - these are the active regions we see," Pesnell informed.

"At solar minimum, the field is weaker and concentrated at the poles. It's a very smooth structure that doesn't form sunspots," he added.