It was dark on Earth when NASA's Parker Solar Probe launched on its journey to endless day. The first spacecraft designed to swoop by a star took flight from Cape Canaveral, Florida, at 3:31 EDT Sunday morning. A roaring Delta IV Heavy rocket carried the probe out of Earth's atmosphere. Next stop: A loop past Venus to rendezvous with the sun.

The source of all light and life on Earth is also the source of one of its biggest natural threats: space weather. The sun's atmosphere regularly erupts with fast-moving flashes of protons and explosions of energetic particles that can hit Earth within minutes and disrupt radio communication, interfere with GPS, and fry the electric grid. A "worst-case scenario" space weather event could cause more damage than Hurricanes Katrina, Harvey and Sandy combined.

"It sounds like science fiction," said National Oceanic and Atmospheric Administration meteorologist William Murtagh, who heads the Space Weather Prediction Center. "But it's something that's not only possible but very likely to happen in the not-too-distant future."

Scientists have long struggled to understand and predict space weather events, because the ferocious environment around the sun makes them difficult to witness as they form.

Murtagh and scores of other researchers watched as NASA's newest spacecraft embarked on a mission that should take it closer to the sun than any human-made object has gone before.

The probe is the culmination of a half-century effort to understand our star, Murtagh says, and it may help us prepare for the hazards the sun may throw at us in the future.

Part of the sun erupted on September 1, 1859. English astronomer Richard Carrington noticed a brilliant white solar flare on the sun, brighter than the sunspots he usually observed. Roughly a day later, a blast of charged particles - known as a coronal mass ejection, or CME - arrived at Earth, jostling the planet's magnetic bubble. People as far south as Cuba saw the sky light up with auroras. Geomagnetic currents sent surges of electricity through copper telegraph wires, zapping operators and setting telegraph paper aflame.

If a similar event happened today, it would bring life as we know it to a halt. 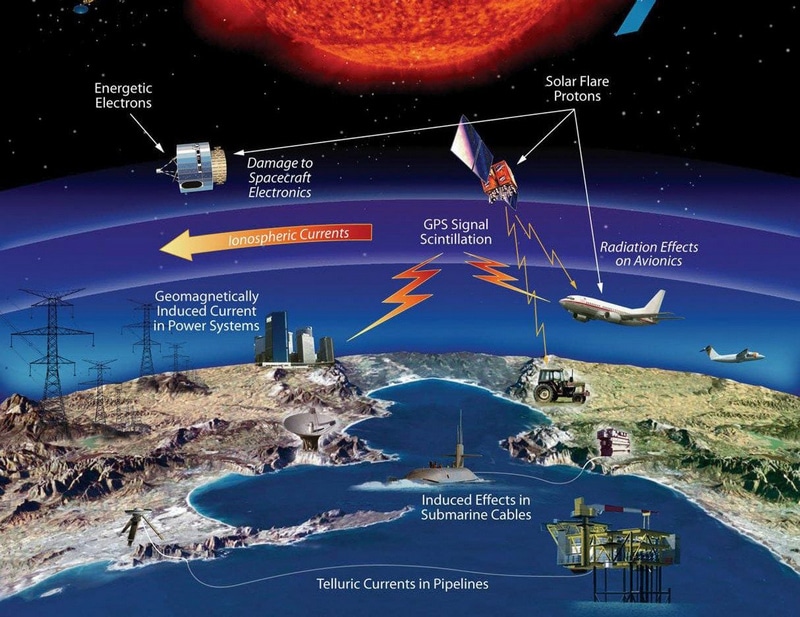 The energetic particles within a coronal mass ejection can penetrate the walls of spacecraft and pose a radiation risk to astronauts and the technology they depend on. They can interfere with satellites, disrupting radio communication and GPS. And if a CME hits our planet's magnetosphere at the right angle, it can generate powerful waves of electricity within the Earth. These may then infiltrate utility grids and blow out transformers that provide electricity - like tripping a circuit on a massive scale.

The sun exploded again in July 2012, spewing material toward Earth at nearly 6 million miles per hour. This time the coronal mass ejection hit a NASA spacecraft called STEREO-A at full-blast. The spacecraft's sensors were stressed, but they still managed to measure the solar particles, gusts of solar wind and the strength of the interplanetary magnetic field.

A year after the explosion, in a paper published in the journal Space Weather, astrophysicists examined the STEREO-A data to answer a worst-case question. "What if that coronal mass ejection had occurred 10 days earlier, when the Earth was in the line of fire?" said Daniel Baker, a professor of planetary and space physics at the University of Colorado at Boulder and one of the authors of the study.

Their conclusion: If it had hit Earth, Baker and his colleagues wrote, there was a "very legitimate question of whether our society would still be 'picking up the pieces.'"

In 2008, a National Academies of Sciences, Engineering and Medicine report on the economic and societal impacts of space weather came up with a worst-case estimate for an extreme geomagnetic storm: It could cost North America up to $2 trillion in the first year, and recovery would take four to 10 years.

It's said that space weather science lags about 50 years behind terrestrial weather forecasting. Meteorologists know what conditions cause hurricanes, and they can spot the seeds of a storm brewing over the ocean long before it makes landfall.

But warning times for space weather events are often measured in minutes, Murtagh said, and there is too much we do not know.

"There's a lack of understanding," Murtagh said. "It's science. It's knowledge of the sun and the physical processes that are likely to produce those energetic particles. We just don't fully understand the science yet."

Much of our modern understanding of the sun stems from 91-year-old Eugene Parker, for whom NASA's new probe is named.

In the mid-1950s, Parker discovered a link between two seemingly unrelated space mysteries. First, bizarrely, the corona, or atmosphere of the sun, is hotter than its surface - scientists liken the sun to a campfire that feels hotter the further one stands from the flames. And second, the dusty tails of comets always point away from the sun, as if blasted by a powerful wind.

Parker realised the corona is not a static halo, but a stream of material from the sun itself. It starts slow and dense and zooms up as it escapes the sun's gravity, eventually exceeding the speed of sound. The pointed tails of comets behave like windsocks caught in the solar wind.

The acceleration of the particles in the solar wind remains one of the "fundamental mysteries of the sun," said Nicola Fox, a heliophysicist at the Johns Hopkins Applied Physics Laboratory and the project scientist for Parker Solar Probe. And it is one of the keys to understanding CMEs - the blasts that pose so much danger to life on Earth.

After the National Academies released its sobering 2008 report, "awareness, both at government and in the public, for this hazard really came to the fore," said a Federal Emergency Management Agency official, who spoke on the condition of anonymity.

The issue is particularly pressing for the East Coast of the United States between Washington and Maine, not only because of the extensive electric infrastructure in this region. The very ground beneath our feet makes us vulnerable, Murtagh said. The 300 million-year-old igneous rock on which the Eastern Seaboard is perched does not conduct electricity well. If a current strikes this rock, it will seek an easier path - like metal pipes, telephone wires and electric cables. Eventually, the current can hit high-voltage transformers, the spine of the power grid, and overwhelm their magnetic cores.

This is not idle speculation. It happened, on a relatively small scale, in Canada in 1989. The sun belched out a gas cloud in early March that cut off radio signals. (At first, some observers suspected Soviet, not solar, interference.) Electrical currents buzzed through the ground and flooded into the Hydro-Québec power plant. Six million people in Québec were without power for nine hours. Glancing effects were felt as far away as New Jersey, where the electrical surge roasted a transformer at the Salem Nuclear Power Plant.

Industry reports suggest operators would have enough time to shut down the grid before it suffered permanent damage. But others are not as optimistic.

"We're not going to know until a real event happens whether or not that's a true statement," said the FEMA official, who added power utility engineers "won't say this publicly," but they have been stocking up on spare transformers where they can. Installing new transformers - which would have to be built overseas - might take one or two years.

That a future solar storm will blast Earth is not a question of if, but when. In 2012, Peter Riley, who studies the sun's corona at Predictive Science, a San Diego-based company that develops computer models of the sun, published an article in Space Weather that calculated the odds of a Carrington-scale repeat. Within the next decade, he concluded, it could be about 12 percent - on par with the risk of other 100-year hazards, like massive floods.

Over the next seven years, the Parker Solar Probe will embark on a series of 24 egg-shaped orbits around the sun, repeatedly swinging past Venus to reorient itself. Each close approach will shoot it through the corona at a breathtaking 450,000 miles per hour - fast enough to get from Washington to New York in about a second. With its dust detectors, particle counters, and a telescope that can take 3-D images of the corona, the probe will measure the sun's electric and magnetic fields, scoop particles from the solar wind for sampling and watch as shocks travel out from the sun's surface, through the atmosphere and into space.

"There's no doubt in my mind that measurements from probe and our understanding is going to have a huge impact on our ability to predict space weather," said Christina Cohen, a scientist at the California Institute of Technology's Space Radiation Lab who studies energetic particles.

It is a project scientists have dreamed about for roughly as long as they have known about the solar wind. But it took half a century to develop the necessary technology. When the spacecraft makes its first close approach in November, a carbon-composite heat shield will be all that protects the minivan-sized Parker Solar Probe from the million-mile-wide ball of hot gas.

Parker was interviewed on NASA-TV shortly after witnessing the launch of the probe that bears his name. "All I can say is, wow, here we go," he said. "We're in for some learning over the next several years."

Parker Solar Probe Launched in NASA's First Mission to 'Touch' the Sun and Study Its Dangers
Comment
Read in: বাংলা