An Atlas 5 rocket soared into space early on Saturday from Vandenberg Air Force Base in California, carrying NASA's first robotic lander designed for exploring the deep interior of another planet on its voyage to Mars.

The Mars InSight probe lifted off from the central California coast at 4:05am PDT (3:35pm IST), treating early-rising residents across a wide swath of the state to the luminous pre-dawn spectacle of the first US interplanetary spacecraft to be launched over the Pacific.

The lander will be carried aloft for NASA and its Jet Propulsion Laboratory (JPL) atop a two-stage, 19-story Atlas 5 rocket from the fleet of United Launch Alliance, a partnership of Lockheed Martin Corp and Boeing.

The payload will be released about 90 minutes after launch on a 301 million mile (484 million km) flight to Mars. It is due to reach its destination in six months, landing on a broad, smooth plain close to the planet's equator called the Elysium Planitia.

That will put InSight roughly 373 miles (600km) from the 2012 landing site of the car-sized Mars rover Curiosity.

The new 800-pound (360kg) spacecraft marks the 21st US-launched Martian exploration, dating to the Mariner fly-by missions of the 1960s. Nearly two dozen other Mars missions have been launched by other nations.

Once settled, the solar-powered InSight will spend two years - about one Martian year - plumbing the depths of the planet's interior for clues to how Mars took form and, by extension, the origins of the Earth and other rocky planets. 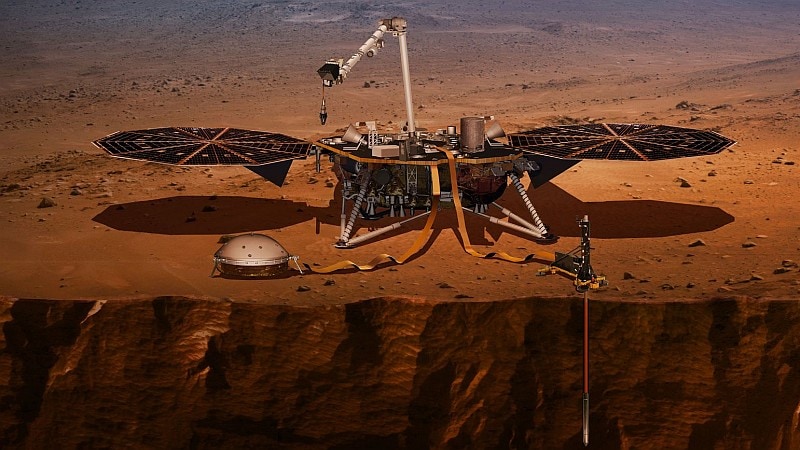 InSight's primary instrument is a French-built seismometer, designed to detect the slightest vibrations from "marsquakes" around the planet. The device, to be placed on the surface by the lander's robot arm, is so sensitive it can measure a seismic wave just one-half the radius of a hydrogen atom.

Scientists expect to see a dozen to 100 marsquakes over the course of the mission, producing data to help them deduce the depth, density and composition of the planet's core, the rocky mantle surrounding it and the outermost layer, the crust.

The Viking probes of the mid-1970s were equipped with seismometers, too, but they were bolted to the top of the landers, a design that proved largely ineffective.

Apollo missions to the moon brought seismometers to the lunar surface as well, detecting thousands of moonquakes and meteorite impacts. But InSight is expected to yield the first meaningful data on planetary seismic tremors beyond Earth.

InSight also will be fitted with a German-made drill to burrow as much as 16 feet (5 meters) underground, pulling behind it a rope-like thermal probe to measure heat flowing from inside the planet.

Meanwhile, a special transmitter on the lander will send radio signals back to Earth, tracking Mars' subtle rotational wobble to reveal the size of the planet's core and possibly whether it remains molten.

Hitching a ride aboard the same rocket that launches InSight will be a pair of miniature satellites called CubeSats, which will fly to Mars on their own paths behind the lander in a first deep-space test of that technology.