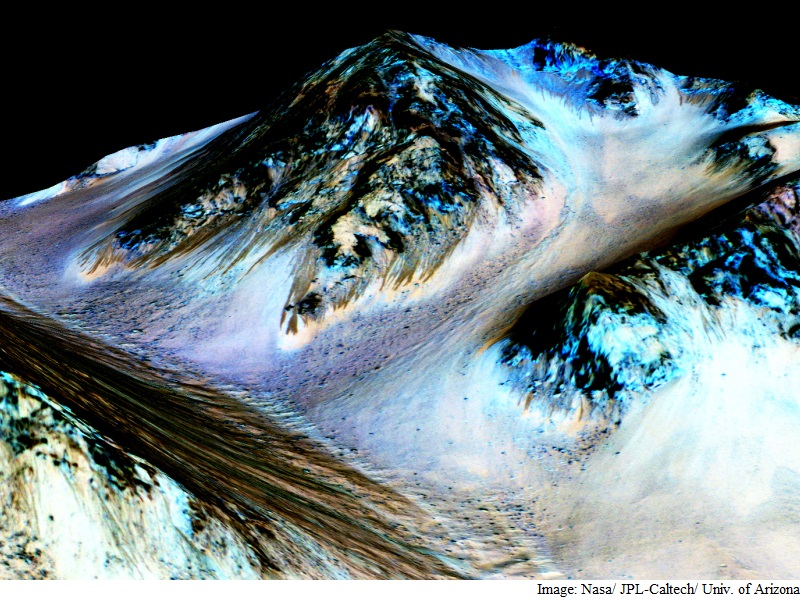 The search for extra-terrestrial life just got a big boost from Nasa's stunning announcement that it now has its strongest evidence yet of liquid water on Mars.

So did the prospects for human exploration of the red planet because the presence of flowing water could help sustain future manned missions, Nasa scientists say.

"We now have great opportunities to be on the right locations on Mars to fully investigate the existence of life on Mars," said John Grunsfeld, Nasa's associate administrator for science missions.

The evidence advanced by the space agency Monday centers on some unusual streaks found on steep slopes on the Martian surface.

A team of experts concluded in a paper published in the journal Nature Geoscience that water played a vital role in the formation of the lines because of the presence of hydrated salt minerals, which contain water molecules.

"The exciting thing about this announcement is the confirmation of what we suspected that this is due to some kind of water feature," Grunsfeld said.

Viable experiments
Some day, he said, a manned mission will go to Mars and retrieve samples from the area where the streaks were found by Nasa's Mars Reconnaissance Orbiter.

The former astronaut said he expected Nasa's engineers and scientists in the meantime will use their ingenuity to come up with viable experiments to detect the presence of life.

"We have the capability to go there, ask these questions of life on Mars and answer it," said Jim Green, Nasa's director of planetary science. "Not an abstract question but a concrete one."

Even before Monday's announcement, scientists believed chances were great that microbial life forms exist below the Martian surface, possibly in subterranean aquifers.

"To me the existence of microbial life in the subsurface of Mars has been very high," said Alfred McEwan, a University of Arizona researcher who is the principal investigator for the High Resolution Imaging Science Experiment (HiRise), the powerful camera onboard the Mars Reconnaissance Orbiter.

Life forms probably could only survive below ground because the surface of Mars is so inhospitable, bombarded as it is by ultraviolet rays from the sun that would destroy all life as we know it, say experts, who note that Mars' thin atmosphere would offer little protection.

Michael Myer, the lead scientist for Nasa's Mars exploration program, emphasized that the source of the water that apparently caused the streaks on Mars's surface is not known.

The streaks appear during periods that are less cold and then disappear again when temperatures plunge, a phenomenon that was first observed in 2011.

Growing plants
The water could come from below the surface, so it is "imperative" to find other, more accessible places on the planet where the same phenomenon occurs and to look there for subterranean sources of water, Myer said.

"We only suspect those places exist and we have some kind of scientific evidence that they do," Grunsfeld said. "That is going to be a very exciting area of exploration in the future."

If there is water on Mars in sufficient quantity then it would be possible to grow plants in inflatable greenhouses, he predicted.

Since plants take in carbon dioxide, which is plentiful in Mars, and put out oxygen, they could serve to produce food while at the same time creating breathable environments, he said.

Nasa officials are confident that over the next five years they can unlock some of the planet's secrets and thereby help to set the stage for future manned missions to Mars.

In March 2016, Nasa will launch a Mars lander called InSight, which for the first time will be able to peer below the Martian surface.

The European Space Agency, as part of its ExoMars program, plans to launch a Mars orbiter in 2016, followed by a robot and exploration platform on the planet's surface two years later, in collaboration with Russia.

The objective of these missions is to detect methane and other signs of biological activity.

Finally, in 2020, the United States will send a new robotic rover similar to but more sophisticated than Curiosity to take Martian soil samples and bring them back to Earth.

The US space agency envisages its first manned mission to Mars in the 2030s, if not sooner.