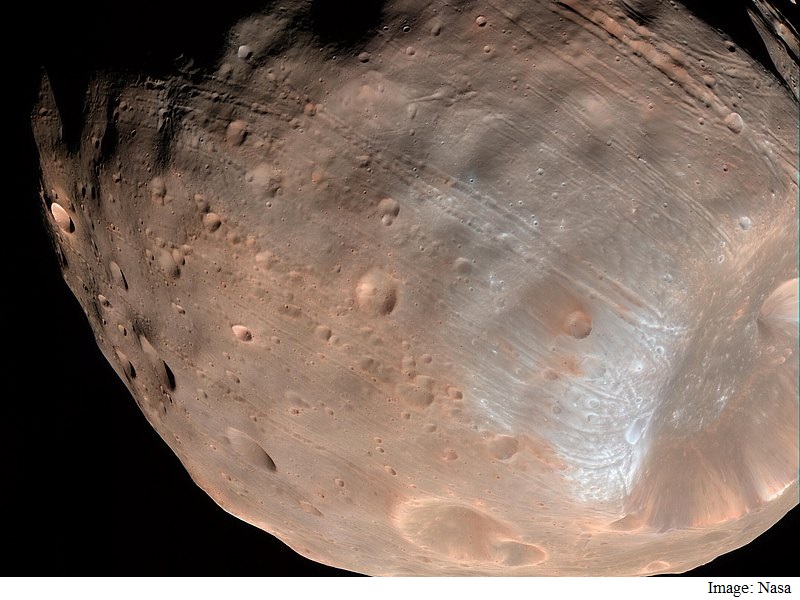 The long, shallow grooves lining the surface of Phobos are likely early signs of the structural failure that will ultimately destroy this moon of Mars.

Orbiting a mere 6,000 km above the surface of Mars, Phobos is closer to its planet than any other moon in the solar system.

Mars' gravity is drawing in Phobos, the larger of its two moons, by about 6.6 feet every hundred years.

Scientists expect the moon to be pulled apart in 30 to 50 million years.

"We think that Phobos has already started to fail, and the first sign of this failure is the production of these grooves," said Terry Hurford from Nasa's Goddard Space Flight Center in Greenbelt, Maryland in a statement.

More recently, researchers proposed that the grooves may instead be produced by many smaller impacts of material ejected from Mars.

But new modeling supports the view that the grooves are more like "stretch marks" that occur when Phobos gets deformed by tidal forces.

The gravitational pull between Mars and Phobos produces these tidal forces.

Earth and our moon pull on each other in the same way, producing tides in the oceans and making both planet and moon slightly egg-shaped rather than perfectly round.

The same fate may await Neptune's moon Triton, which is also slowly falling inward and has a similarly fractured surface. The work also has implications for extrasolar planets, according to researchers.